Adding Turmeric To Your Diet: Supplements Or Food Source? 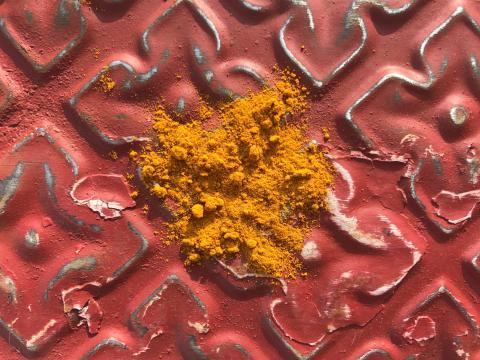 In 2015, we stuffed kale into everything. The year after kale we obsessed over pomegranates. In 2014, avocados were king. This year, 2017 is all about turmeric—this middle eastern spice isn’t just for curries anymore; turmeric is being sprinkled into lattes, shaken up in smoothies, and ground into face masks.  Originating from India, turmeric has been a staple in Eastern cooking and medicinal practices. It’s been cited that this little yellow spice helps aid cancer prevention, stimulates better memory, and is an anti-inflammatory.

Before this turmeric craze, I hadn’t heard much about it. While rummaging through a friend’s medicine cabinet, I stumbled upon a plastic bottle of turmeric supplements. Thinking back about where I’d heard of this stuff before, my head went to two places. First thought was, “Ah! This is what gives curry its pretty yellow color.” The second thought: I had a friend once tell me that their grandma would swallow a spoonful of the powder every morning. That seemed strange because wouldn’t that make you cough, like the cinnamon challenge from the early 2000s? Did grandma beat that challenge?

Opening up the bottle, I shook out two golden capsules that were the size of the tip of my pinky. The outside of the bottle didn’t read much other than “A great anti-inflammatory!” I had no idea what effect turmeric might have on my system, but I thought, “I guess we’ll see!”

The results were amazing! Despite my ability to get good sleep and exercise daily, I find that I am a typically sluggish person. I have bad ADHD which I am reluctant to take medication for and I suffer from acute anxiety (like everyone else, right?). But this day was different! The first thing I noticed was that I seemed to gain a sense of alertness. My thoughts felt clearer and more manageable. I was awake and ready to make decisions. Even better was that I felt a noticeable upswing in my mood. Throughout the week, I continued to raid my friend’s stash of turmeric supplements and the positive feelings continued.

I had finally found something that gives me energy and a better mood, but doesn’t force me to walk into a coffee shop or doctor’s office. I was sold! That week I decided to stop taking from my friend’s pill cabinet (maybe turmeric helps you grow a conscious?) and headed to my local grocery store.

Prepared to pick up a bottle of this magical stuff, I turned down the supplement aisle, but was abruptly stopped when I saw the wide selection of turmeric supplements that lay in front of me. The supplements ranged from $15-$50, each one with its own unique claims and promises like “with an extra boost!” “Added B vitamins!” “Pure turmeric, nothing extra added.” Reading through all these labels I quickly became overwhelmed. My anxiety struck through and my head became uncontrollably filled with questions. “Is more expensive better? If I get the cheaper one, will it even be worth it? Do I need extra vitamins?”

I got overwhelmed the same way I get overwhelmed when I’m trying to read an article online that is surrounded by a million pop-ups. So what should I choose? Is more expensive better? If I get the cheaper bottle will I be missing out on the quality? What about my friend’s grandma who just ate it straight—is “the supplement” necessary?

Turns out the right question was “What is turmeric?” Let’s give this turmeric spice a look through.

Turmeric is a root that comes from the ginger or (if you want to get scientific) Zingiberaceae family. Scientists and dietitians attribute the health benefits of turmeric to a component called curcumin. This component is what gives turmeric its vibrant yellow color. Pilot studies have shown that curcumin aids in the resistance of Alzheimer’s and a broad spectrum of other ailments. While this is the part of the plant that is supposedly the most beneficial for the body, there is only 2%-3% of curcumin found in the source. So probably don’t expect health benefits if you’re getting turmeric dusted on your latte.

Curcumin is a water-based component, which means that once it has been ingested, it is broken down in the stomach acids. In other words, curcumin does not make it to your bloodstream and it is difficult for the body to process this component—though this may not actually be a drawback.

Even though curcumin may not have a direct impact on the system, its benefits may come from how it interacts with other chemicals in the body. Taking black pepper with turmeric helps the body absorb the curcumin. Black pepper contains piperine, which allows the body to absorb the contents by 2000% more.

Turmeric is an anti-inflammatory, which means that it helps the body fend off bacteria that cause damage. While some inflammation is good to help ward off sickness, excessive inflammation can have hazardous effects on the body.

Supplements vs. the Source

Remember earlier when I was raving about the supplements I took from my friend’s house? I’ll admit they made me feel great, but with the uncertainty that comes from buying supplements and the whopping price tag associated with them, they aren’t a necessity.

There are endless choices in the supplement aisle and because they aren’t regulated and don’t have to meet certain standards, it is difficult to know what you’re getting from them. According to Consumerlab, turmeric supplements were found with trace contamination of heavy metals such as lead and filth like bugs and dirt. How delicious!

Using common sense, I could only guess that the $5 bottle could be more prone to these contaminations. If I’m trying to improve my health I probably don’t want to be eating bugs and dirt, but do I need to be paying close to $50 to do this?

The answer is: NO.

I decided to take on my friend’s grandma’s tactic. I added a teaspoon of turmeric to my morning water and…it did not go down right. My friend definitely lied about their grandma taking the powder straight.

Round two (after a bout of coughing and gagging): I ingested the turmeric in a less extreme way. I put it in a banana-almond milk-chai smoothie.  Throughout the day I felt the similar effects I had before. My mood was uplifted, I felt more capable of going about my day, and I felt energized.

When it comes to turmeric, I believe both supplements and the source can work. Personally, I’m cheap, I don’t like to spend more money than I have to, but I also spend half my day tinkering around with recipes and pinching pennies. When it comes down to taking turmeric, there are some considerations to be made.

The best part of supplements: they are fast. After a meal and water, you take them and the ingredients are immediately in your system. Turmeric has a smoky flavor. It can be good in small amounts (like curries and lattes) but it can also be very overwhelming in larger amounts. When I was taking turmeric supplements, I did not notice a change in my breath. (You know, like when you take a fish oil pill and then half an hour later your breath smells like a Jewish delicatessen.) Finally, since supplements are not regulated and held to a universal standard, choose a brand you trust.

If you’re patient with trying new recipes and are cheap like me, look no further than the bulk spice aisle. This stuff costs pennies. I have experimented with a few ways, but now I have found the most painless way to ingest turmeric. At night I mix and boil coconut milk, turmeric, black peppercorns, and honey. I put the concoction in the fridge overnight. In the mornings, before I go on my run I drink 8 ounces of the golden substance. For other recipe ideas check this out!

Turmeric is a great spice to add to your daily routine. Your preference of how to ingest it comes down to three things: Price, preference to the spice, and time. Once you know these factors, you are well on you way to energized living. Just don’t do it grandma style.

ALL ARTICLES BY Elena Hayden