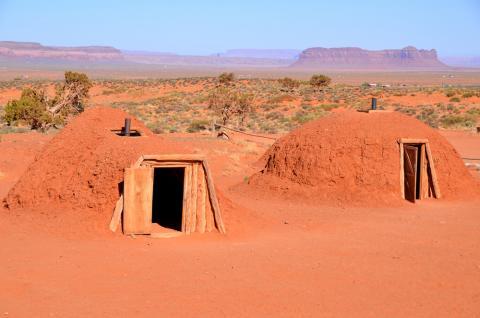 The sweat lodge: from the very first time I heard this word I had an instant attraction. To me, Native Americans and their ceremonies contained everything that made this mundane world magical and alive. From my first experience 15 years ago, I prayed to sit in the seat of the water pourer. This is not a position offered lightly. The energy that participates in these lodges are not to be recklessly played with. It is a great honor, responsibility, and alignment to pour water for the people. It is even more humbling when the Spirits decide to offer a healing that no other Western modality could touch.

That is the story I want to share. But first, some background.

What is a sweat lodge?

All over the world different cultures have similar traditions of purifying through heat and water. The sweat lodge originated in the Plains of the Americas. The lodge is dome-shaped, made out of natural materials:

The volcanic stones are heated inside a sacred fire until they are systematically brought in during the four rounds of the sweat lodge. The fire represents the Masculine energies of the Universe. Between each stage, the door is opened to mark the ending of a round. The medicine person pours water onto the stones that are brought into a center pit. The lodge is considered Feminine and this sacred pit is where the fertilization of the Masculine and Feminine happen. Fertilization sparks the light of creation. Creation is where all new possibilities can happen.

Why do we participate in a sweat lodge?

There are several different types of sweat lodges and reasons for doing them. The most common are:

It is also important which way the door faces to determine the energies that are being summoned during a lodge. The number of stones is also important. The word that the Lakota people use for a sweat lodge is inipi, which ultimately translates into “rebirth.” This ceremony is an opportunity to see yourself, and therefore the world, anew. A sweat lodge serves as purification before rites of passages. They also serve as a method to rebalance your mental, emotional, physical, and spiritual bodies, thus, supporting you to walk a balanced life.

How does a sweat lodge work?

Not just anyone can pour a sweat lodge in the way that I am speaking of. To begin, there are rites of passage and initiation to pour a lodge. If these lodges are to perform healings then there is a natural born gift and training that is at play. This practice is as old as time and the spirits that follow it are following a lineage that has been called upon in the same way since its inception. It’s important to follow in the footsteps of those who have walked before you and to sit with integrity if the Spirits are going to trust you. Some of the steps to making this work are:

The Spirits want to work with someone they can trust. This trust is extended when the blessing is passed in a good way. It is important never to break that trust by charging for the ceremony or breaking any conduct rules.

The Magic of a Sweat Lodge

Yes, real magic does exist and it does exist within these lodges. The songs call in the spirits, the helpers, and open up the veil between the unseen and the seen worlds.

During the last sweat lodge I poured in British Columbia, a woman came who needed to pray for her son. He had suffered a severe psychosis one-and-a-half years ago. This psychotic break landed him in the hospital for 10 months. He was medicated and drooling on the hospital floor. Heartbroken, the mother took him home to heal him more naturally. He spent the last 7 months at home but unresponsive. The mother was at the brink of her capacity to hold her beloved son in this condition any more. She came to the lodge to pray for healing for him. It had been over 7 years since she had prayed in a sweat lodge and her mind created every obstacle to avoid coming. She even called saying she was running late but the lodge was also starting late so the door remained open for her. With one foot in front of the other, she came.

In this lodge, a large eagle wing grazed my back and I learned later grazed hers too. When she returned home, her son had completely turned around. He was engaged in life, helpful, happy. It was the son she had remembered. He continues to walk in mental health without medication or hospitalization. He had a spiritual healing and that is what he needed. This is what the medications and hospitals could not offer.

These lodges are powerful. Miracles happen. Dreams come true. I share this story with you as evidence of the power of ceremony, Spirit and prayer.

If I leave you with anything; I hope to leave you with the idea that Spirit is ever present with each of you and is a vital part of our healthy and balanced life on earth.

ALL ARTICLES BY Gaia Sophia