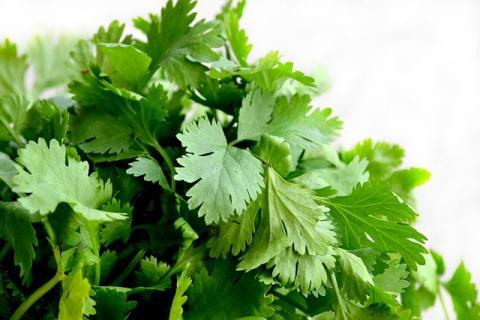 You either love it – or hate it.

I stand in the group of cilantro lovers – I’m happy to pile on that peppery, parsley stunt double. But for a small percentage of the population, including the late French chef Julia Child, the flat-leafed herb tastes oddly like soap, or even bugs.

Cilantro is the Spanish term for the leaves of the coriander plant – you probably recognize coriander as a dried fruit or seed used in many ethnic dishes. The word “coriander” is believed to be derived from the Greek word “koris,” meaning “bedbug.”

Well, that didn’t help the plant’s flavor reputation at all.

In truth, cilantro is good for you. Also known as Mexican parsley, cilantro is used in spicy salsas, Indian curries, guacamole and many ethnic rice dishes. The leaves are loaded with healthy minerals:

Cilantro may help reduce LDL cholesterol and is one of the richest sources of Vitamin K, which is believed to help build healthy bones and prevent or slow the effects of Alzheimer’s disease. And it packs all that goodness in 23 calories per 100 grams – that’s a lot of cilantro!

If you are one of the many who loathe the taste, your genes may be the culprit. Scientists have conducted studies that suggest some people are born with a specific group of olfactory-receptor genes that pick up the smell of fat molecules called aldehydes. Aldehydes can be found in cilantro – and in soaps and lotions. Some insects emit aldehyde-rich scents to repel predators. So when some members of the foodie population sniff cilantro, their genetic survival instincts kick in, while others

But you may be able to acquire a taste for cilantro by crushing the leaves into a pesto – some say it lessens the soapy flavor.