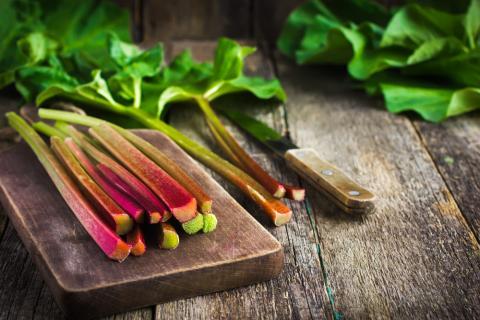 Ahhh...strawberry rhubarb pie season. Or, have you ever tried a rhubarb apple pie? Perhaps you’ve seen delightfully dainty rhubarb tarts and pastries in the local café? Some towns around the U.S. love rhubarb so much that they host a rhubarb festival celebrating the unique late spring-early summer crop.

Despite it commonly being used as an accompaniment for sweet dishes and desserts, rhubarb is actually a perennial vegetable. The rhubarb plant begins to grow early in the spring, and at maturity, presents bundles of woody, reddish stalks (resembling the form of celery) with hefty leaves. The leaves contain oxalic acid, which is poisonous not just to humans, but to animals as well. (Later in its growing season, the oxalic acid in the leaves can work its way into parts of the stalk. When in doubt, cut the stalk a few inches below the leaf. However, one would have to consume a whopping 11 pounds of rhubarb to experience truly poisoning effects of the oxalic acid in rhubarb leaves!)

You will likely find rhubarb at your local farmer’s market or co-op. There are several varieties, and the redder the stalk, the sweeter it is. All rhubarb is generally tart and bitter, but the greener stalks are especially so. Rhubarb serves as a great substitute for other bitter fruits, like cranberries, and pairs well with naturally sweet ones like apples and berries. Making rhubarb sauce is as easy as boiling water, too; just chop the quantity of rhubarb you’d like (3 cups chopped is about 2 cups cooked) and add 2-3 tablespoons of water per cup of chopped rhubarb. Heat on medium for about 15 minutes, or until the desired consistency, similar to that of applesauce.

Perhaps you may know a friend or neighbor with a patch of rhubarb (which, you could remind your friend or neighbor, should be divided every 3-4 years in early spring or fall, when the plants are dormant). Ditch the broad, deep green leaves of the rhubarb plant, and harvest stalks by either pulling the stem from the base, or chopping at the base. Most stalks will pull away with a good tug. Be sure to leave at least two or more stalks per plant for regeneration. Thin stems are a sign of limited energy in the plant and indicate to stop harvesting; rhubarb stalks become somewhat woody, fibrous, and tough as they are retiring from the 8-10 week season. One way to maintain the health of a rhubarb plant and prolong the season, though, is to cut the puffy whitish green seed stalks that shoot up at the base.

Rhubarb originated from Central Asia, where it was cultivated and used primarily for medicinal and cosmetic purposes. It is still commonly used for its medicinal values: traditionally, the root (which contains traces of oxalic acid) was used for medicinal purposes, particularly for its potential use in treating ailments such as dermatitis, pancreatic cancer, and diabetes. Cosmetically, it is possible to make a natural hair dye from dried rhubarb root. Find out more about the careful process here. This should not be attempted with children, and can leave lighter colored hair looking lighter and brighter.

Rhubarb is one of the least calorically dense vegetables, and is very low in fat and cholesterol. Packed with dietary fiber, protein, vitamins C, K, and B complex, and calcium, manganese, magnesium and potassium, rhubarb eases digestion difficulties, and aids in weight loss, and the high concentration of antioxidants in rhubarb may help to prevent cancer as well as cardiovascular and heart disease. Polyphenolic compounds in rhubarb—beta-carotene, lutein, and zeaxanthin—function to protect the skin and eyes from free radicals that may cause chronic diseases like cancers and macular degeneration. Trace amounts of copper and iron in rhubarb help to stimulate generation of new red blood cells, and the most prominent vitamin in rhubarb, vitamin K, plays a role in healthy bone growth and brain development. Basically, you have nothing to lose (but maybe some weight!), and lots of benefits to gain from a slice of rhubarb pie!

Incorporate rhubarb into your next summer barbeque with this recipe for homemade rhubarb barbeque sauce. (Or try some other Basmati original rhubarb recipes!)