Your Guide To Summer Flowers: Sunflower 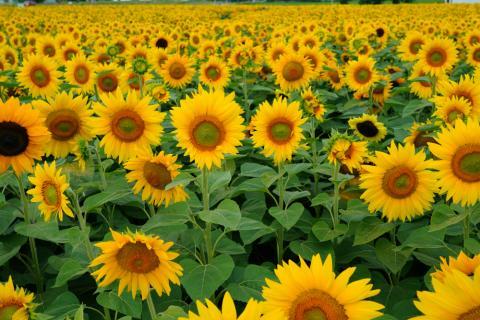 Sunflowers are a member of the Family Asteraceae or Aster family of the genus Helianthus L. or sunflower P containing the species Helianthus annuus L. or common sunflower P. The plant is native to North America whose original inhabitants cultivated the plant to its current physical configuration. The plant was introduced to Europe by the early Spanish explorers where it became a popular ornamental plant throughout the continent. In 1796 the first mention of sunflower oil was published and by 1830 the production of the oil was commercialized, and the Russian Orthodox Church contributed to its popular use as a food oil by not including it on their forbidden oil list. It wasn’t until the late 19th century the Russian developed seeds were introduced in the United States. Canada started their sunflower breeding program in 1930.

Sunflowers grow from a single coarse stem to a height of six feet that produces rough, hairy leaves. The large flowers are made up of minute florets that grow tightly together with petals of yellow, orange, or maroon. The seeds that are formed can be white, black, or striped.

How To Grow Sunflowers

Sunflowers are a good plant for the novice gardener. They require little maintenance and will grow in any soil that does not get saturated with water. They are drought-tolerant and do well in full sunlight. They are toxic to several plants like grasses, potatoes, and pole beans. It is suggested to grow the plant from seed and sow directly into the garden after the last frost. Place the seeds approximately six inches apart one to two inches deep; cover and water until the seeds sprout in about a week to ten days. When the leaves emerge thin the plants to about two feet apart. Sunflowers will mature and produce seeds from eight to 120 days depending on the variety. To have flowers through the first frost, sow a new row of seeds every two to three weeks. It is suggested to use the tall, seed producing varieties like Aztec Gold Hybrid, Mammoth, or Paul Bunyan Hybrid. These tall varieties need to be supported as the stems get brittle. Use the smaller varieties for use in floral arrangements.

The sunflower has long been used as a medicinal herb. The sunflower leaves have unique healing properties such as anti-inflammatory and are used in the treatment of gastrointestinal disorders, asthma, and respiratory maladies. They relieve pain and can be used for menstrual and breast pain and pain caused by inflammation. The leaves are also used in the treatment of ulcers and wounds and in tropical climates help treat malaria.

The sunflower seeds are rich in vitamin E and folate and contain magnesium, phytosterols, and selenium. These properties promote cardiovascular health, regulate cholesterol levels, balance thyroid hormones, and acts as a catalyst for DNA to repair damaged cells. The oil of the seed is high in unsaturated fat know as linoleic acid and contains vitamins E and K. The oil lowers cholesterol, is used as a treatment for athlete’s foot, lowers the risk of developing cardiovascular diseases, and also lowers the risk of developing cancers.