Why You're Storing Your Vegetables Wrong 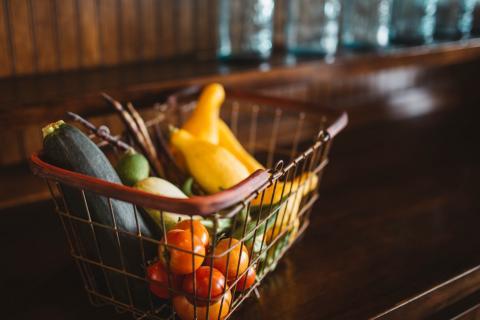 Thanks to the refrigerator and humans’ propensity for fresh, crisp fruit and vegetables, it might seem likely that all produce should be stored in the fridge. If you’re used to putting your corn, tomatoes, and garlic in the fridge though, think again. Here’s the (scientific) way to keep your food nutritious and tasty for days at a time.

The best corn I’ve ever had has been grown in my garden. That’s not because I’m the best gardener (I’m not), our soil is the sweetest (it’s not), and the Almanac predicted a good harvest day (it didn’t). Rather, corn tastes the best when it’s eaten almost immediately after picking. I try to time harvest so that I’m picking the corn as the water is boiling on the stove. Then, I quickly shuck the corn and dunk it into its hot bath.

There’s a reason behind this: the sweetness of the corn kernels quickly become starchy after more than two or three days. As University of Georgia Extension horticulturist Bob Westerfield and Iowa City farmer Marvin Hotz stated in an epicurious article, “If you don’t plan on eating your corn within three days—and you should unless you like mouthfuls of starch—freeze it.”

What to do: Keep corn ears fresh by wrapping them in a plastic bag or clean cloth and place in the refrigerator. Consume as soon as possible for the best taste. If you don’t plan on eating the corn anytime soon, consider slicing off the kernels and freezing in airtight freezer bags.

How to use it: in this summery Grilled Corn Salsa.

Tomatoes are a delicious summertime treat, delicious in a Tomato Onion Frittata, Bruschetta, or in homemade Roasted Marinara Sauce. Unfortunately, tomatoes are almost always stored wrong. It might be tempting to keep them cold in the fridge, but storing them there can lead to dry, tasteless tomatoes. A study in the Proceedings of the National Academy of Sciences of the United States of America found that chilling tomatoes deteriorates both flavor and volatiles—carotenoids and amino acids, for example.

What to do: Store ripe tomatoes on the counter but away from direct sunlight; unripe green tomatoes can be kept in a paper bag or box, stem-side down, in a cellar or cool pantry.

How to use them: in this vegan Roasted Tomato Soup.

Have you ever started washing a potato in preparation for dinner when you suddenly notice that it’s turned green? Have you ever seen one sprouting green buds? When stored in direct sunlight, potatoes turn green; above 45°F and your potatoes are almost ready to be planted in the ground. An article in Iowa State University’s Extension and Outreach program recommends storing potatoes in a dark location with temperatures between 40 and 45°F. Be careful not to consume any green portion of a potato, as the glycoalkaloids present can cause serious illness.

What to do: Keep your potatoes cool and dark. If you have a cellar or pantry, keep your tubers there.

How to use them: in this vegan Potato Salad.

Onions are the fourth most consumed vegetable in the United States (following potatoes, tomatoes, and corn for somewhat obvious reasons when thinking of the Standard American Diet), but few people know how to correctly store them. The Journal of the Japanese Society for Horticultural Sciences found that storing onions in a location with 40-50% humidity can ensure freshness for up to 4 months.

How to use them: in this Vegetarian Enchiladas recipe.

For as long as I can remember, I’ve always stored cucumbers in the refrigerator, thinking that’s the best way to make my cucumber salad crispy. Turns out, I was damaging these sensitive vegetables instead. An article in the University of Montana Extension recommends keeping cucumbers entirely out of the fridge if possible, as temperatures below 50° can cause spoilage.

What to do: For ideal taste, keep cucumbers on counter in temperature around 55°; do not store near apples or tomatoes.

How to use them: as part of a delicious meal with Cucumber Raita.