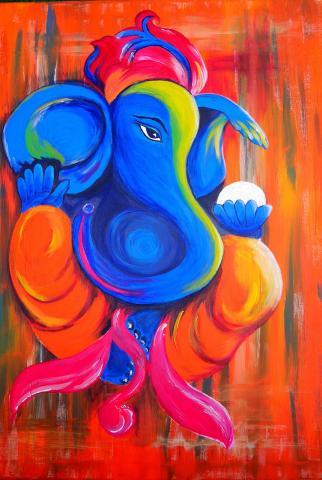 Perhaps you have heard the story of the elephant-headed god in the Hindu faith. The story of Lord Shiva and his wife Parvati and how their son Ganesha came to be.  If you have not, I will tell it to you here in my own abbreviated version. For this personification of the Divine is foundational, in my opinion, to both the understanding of the Hindu deities in this unfolding series, as well as to the integration of the embodiment of what each of these gods and goddesses represent within the spiritual aspirant. Ganesha is he who is to be invoked at the beginning of any new venture or at the start of the day. And so we begin with the story of Ganesha, how he supposedly “came to be,” and how we might be able to find Ganesha-consciousness within.

One version of the story goes something like this...

One day Lord Shiva, the embodiment of the masculine, spiritual ascetic, who represents consciousness itself, had left the house while Parvati, his wife and feminine creative counterpart, stayed home. Getting bored, Parvati decided to fashion a child out of the earth for her own enjoyment and companionship and so she did and called him Ganesha.

Following the creation of her new child, she asked him to stand guard while she went into meditation and to let no one bother her. Upon returning home, Shiva finds this young lad blocking the doorway to his abode. When asking the boy to move aside, and upon hearing his refusal, Shiva angrily takes out his sword and slices off the head of Ganesha. Hearing the commotion, Parvati comes out of her meditation, back into present consciousness (with her beloved), and berates Shiva for killing their child. She tells him to fix it right away. Shiva, feeling awful for his deed, runs into the forest and cuts off the head of the first animal he comes upon to replace the head of his son. This animal, as you probably guessed, was an elephant. And this is the story of how the elephant-headed god came to be.

All over India, Ganesha is one of the most prevalent deities found in homes and on altars. His embodiment represents the removal of obstacles and the gaining of wisdom. In the story above, we can see how Ganesha’s presence originally stood as an obstacle between Shiva and his beloved Parvati. Though once realizing the connection, that this being stood as guardian to hold space for the Divine Feminine while the masculine was “out” and also represented the creative power of shakti in motion—the regular head was replaced by the elephant head of wisdom.

In the creation story, Shiva and his consort Parvati (or any other form the Divine Feminine tends to take) represent the masculine and feminine aspects of the Cosmos. The name Ganesha is taken from “Ganas”—meaning “to break down in categories” or “groups” and “Isha” meaning “lord of.” Ganas is also thought to refer to the Gunas, or the original elements of nature and creation—Sattva, Rajas, and Tamas. So the “birth” of Ganesha could be seen as the initial “stepping down” of the primal source of creation (Prakriti) into form. For prior to this creation, the masculine and feminine existed separately as the two main aspects of reality—consciousness and energy (Shiva/Shakti or Purusha/Prakriti).

Within ourselves, when we contact or invoke Ganesha, I believe we are inviting the interplay of our masculine and feminine natures within to create with elemental potential, that which we desire next, with wisdom. Hence the reason to call upon the name of Ganesha at the beginning of new projects or embarking on a new journey. For we all contain both the masculine and the feminine nature—consciousness and energy—and we are also made up of elemental substance, through the union of these two parts. But without asking for them to “group” or manifest in form, we remain, basically, in our individuality, in the pre-creation (or pre-creator) state. We remain as consciousness and energy, but without the form of what we are capable of creating. The invocation of Ganesha asks for form to be taken, it supports us in our god/goddess capacity of creating something with our lives—rather than being passive observers with loads of potential.

To chant to Ganesha, as with the words at the beginning of this article, we are cuing our primal creative abilities which exist through the Shiva/Parvati (Shakti) forces within (also manifest as Pingala and Ida in the spine and intending to birth something new, something both innocent and wise simultaneously.

Invoking Ganesha in our lives, with awareness, can then sound something like this:

“OM, Calling upon the masculine and feminine forces within my body to rise and copulate in my inner vision. Asking these forces to spark the elements necessary to come together, first in my being, and then in my reality, in such a way as to allow for the manifestation of that which I envision and desire, in alignment with the highest good of creation. May nothing interfere with this creative force. In wisdom, I proceed.”

In yogic and tantric philosophy, Ganesha is associated with the root chakra, Mulandhara. This energy center is thought to be represented by the element of earth, the square, and the color red. This is significant to the powers of manifestation, for we manifest into form on the earth plane—in the material. But in order to get to manifest form, we must step down the desires and ideas of our creation baby from the ethereal planes of the higher mind, through the wispy longings of the heart, past the fires of creation in the belly, baptizing them in the waters of karmic and orgasmic release in the sacrum, all the way into the root, foundational element of form.

The square represents the coming together of all the elements in order to make a container through which they materialize. Squares represent the earth plane and are often seen at the borders of yantras, which are meditative tools for manifestation as well. The color red represents blood and the earth, where we can feel and experience the very real components of all the less dense codings found in our DNA and in the DNA of all of life.

The elephant head that Ganesha is seen with reminds us to proceed into our new endeavors and journeys with as much wisdom as we may, for elephants are known to be very wise and to never forget. Therefore, to call upon wisdom within, with remembrance of who we truly are as we seek to bring in something new, or start a new venture, is so important to the success and alignment of our journey. It is where we activate the god-self within, the part of us who exists beyond ego, with a grander vision for our lives, and is wise enough to invoke creation with this in mind.

By owning that this Ganesha idea is really our own capacity to create without obstacles (and not shut down that creation, or “kill it”) is to acknowledge ourselves as creator beings. It is to embrace the awareness that Divinity is an inside job. There is nothing, no god, no force, no reality that is really separate from us—except in our belief as such. Some feel when they pray or chant that they are communicating with some outside authority who they are supplicating for intervention. But to truly understand Oneness and the power of mantra and iconography in the way I am explaining it is to make outer depictions of divinity not only relatable, but very personal. So personal, in fact, that we realize they are not only not separate, but that they are actually parts of us in a very deep and grandly powerful way.

To connect with the idea of Ganesha as an aspect of the self is to own the responsibility and the power to align with our desired creations. It is to recognize that if we desire something that that desire is rooted in the impetus of the cosmos wishing to express through us. To invoke the quality within that knows this, and basically commands time and space to align with the powers of the universe in our lives, is an extremely empowering act. In this we free ourselves up to live authentically and with inspiration, daily.

There is so much more that could be said about Ganesha and what he represents within us all. For now, I leave you with these words:

In the name of our inner wisdom, in the caldron of grounded elemental magic, wherein we can bring ideas into form, I sing praises and honor. And so it is. Om Sri Ganesha.