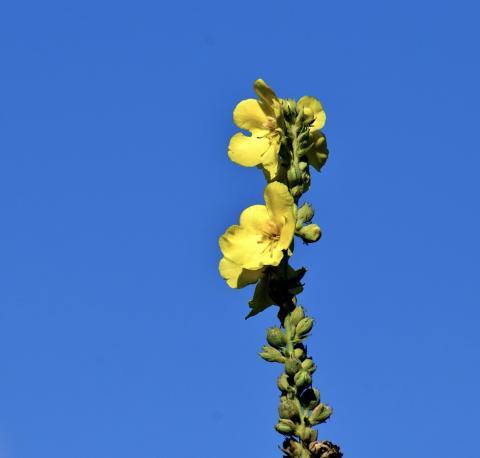 Botanicals have a lot to offer when it comes to keeping our nervous systems healthy and helping with nerve-related issues.  Here are four of my most used allies!

The first thing most folks think of when they hear “St. John’s Wort” is “anti-depressant.”  Indeed, both tradition and scientific studies show that St. John’s Wort can be effective for mild-to-moderate depression. It is a great tension-reducing herb.  But my most frequent use for this handy herb is pain from nerve pinching, inflammation and damage.  It is a common ingredient in sciatica formulas and in formulas for recovering from head injuries or damage to nerves elsewhere in the body. It may also help with other forms of neuralgia (nerve pain), and research shows that in addition to anti-inflammatory activity, St. John’s Wort also influences neurotransmitters and oxidative stress (free radicals) to reduce nerve-related pain.

A friend nearly lost his leg in an accident and his wife plied him with St. John’s Wort as he healed. The doctors were truly amazed at his progress. Now, to see him walk, you wouldn’t even know what he’d been through.  St. John’s Wort is great used simultaneously internally as well as topically, depending on where the pain is. It’s easy to get commercial tincture (oral use) and infused oil (topical use) from a good source.

St. John’s Wort is also a fantastic tonic for nourishing the nervous system. Note, though, that St. John’s Wort impacts the activity of a metabolic enzyme that influences serum levels of about half of the prescription drugs out there, so unless you understand the intricacies of drug metabolism, don’t combine this herb with medications.

One day, I really knocked my back out by carrying an amplifier for a sound engineer friend. Ouch!  The usual St. John’s Wort wasn’t touching it. I learned in herb school about the use of mullein root for pain arising from spinal misalignment and decided to give it a go.  Wow...it’s been near constantly in my daily formula since!  Not only did it work quickly, but daily use of mullein root has significantly reduced the chronic low back pain I’ve dealt with for decades as well as the frequency of sciatic and femoral nerve pain that accompany my back “going out.”  Unless I do something stupid like move a large piece of furniture by myself, my back goes out maybe a few times a year instead of nearly every month. I’ve had similar results in clients. For me and at least one of my clients, it’s not a permanent fix; stop the herb and the issues start creeping back.  But it’s safe and not much is needed for effect.

Some herbalists use the leaf for sciatica and other nerve-related pain, though I’ve not had success with this myself taking it orally the way I have with the root.  I haven’t tried the leaf topically, though.  I mention this because most of what you’ll see commercially is the leaf, not the root.  Fear not, this is a widespread weedy plant that can be found in abandoned lots, along paths in open areas, and in other manmade clearings…just avoid dirty sites.  It’s a biennial plant, dying after blooming the second year…get the root before it blooms and immediately separate the root from the leaves upon harvesting. You can dry it for tea or make a tincture.

Different herbalists have differing opinions on exactly how this fantastic plant medicine works.  Mullein root contains aucubin, a chemical that reduces inflammation, so this might be one way.  The root is one of the lesser researched parts of a plant that’s not had heavy focus to begin with, scientifically speaking. Mullein in general also has some relaxing properties…yet another helpful way it takes care of the nervous system.

And now for a mushroom!  This is one of my go-to botanicals for folks (including myself) who’ve sustained a good bop to the head.  It blends well with St. John’s Wort and other nerve tonics for folks who’ve sustained any kind of nerve injury. Studies show that Lion’s Mane can stimulate the production of a chemical called Nerve Growth Factor (NGF) and stimulate nerve growth. The mushroom even stimulated enhanced development of the protective myelin sheath that lines nerve cells and helps them fire appropriately.  While this work has been in cultured cells in a dish and in animal models, it supports what herbalists have found using this mushroom.  Lion’s Mane is in my own formula to help keep my brain going strong as the years go by. In a clinical trial, powdered mushroom indeed improved cognitive function in elderly folks diagnosed with mild cognitive dysfunction. I’m not quite there, yet, but it’s good to prepare!

This is another botanical that’s not difficult to obtain from a good source online. Or do what I do: Buy a mushroom kit and grow your own!

Frankincense is a divine-smelling essential oil distilled from a sticky resin exuded by trees in the Boswellia genus.  Frank essential oil reduces nerve pain at least three ways.  One is by reducing inflammation.  Another is by numbing the nerve endings themselves. Frankincense also interacts with the brain to reduce the sensation of persistent or extensive nerve pain.  It may also assist in nerve regeneration…a process not thought to happen until recent decades.  On top of all that, the scent of frankincense also provides great aromatherapy aid to the nervous system for tension, anxiety, fear and anger.

Note that frankincense resin itself can also be used orally in various forms for pain, though I don’t recommend using the isolated essential oil orally.

So, there you have it…a handful of allies to keep your nerves feeling and firing right!