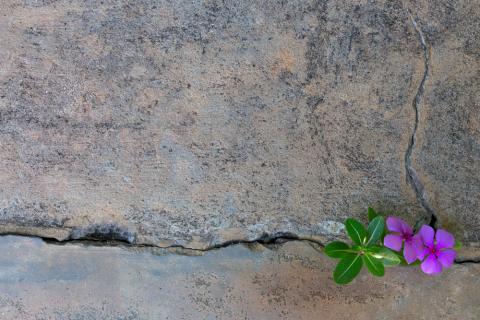 After 8 years in roller derby, Laurel suffered the injury every derby girl dreads: a broken ankle. Despite a looming fear that nothing would ever be the same again, Laurel, a determined Bikram-style instructor, embarked on a yoga journey back to skating.

A low ankle break is an injury that lingers and delays. The moment I heard the snap in my ankle, I knew it was all over. I saw my mediocre derby career pass before my eyes, abruptly destroyed. My life was at an end.

After a few deep breaths, I remembered who I was. I told myself what I had told dozens of broken skaters before me: Bikram yoga will solve it. Now I had a concrete opportunity to stand by my word and lead by example. That’s how I got through the next moment, and the next. I still had to wait 5 weeks before I could return to yoga. The 5 longest weeks of my life.

Once I could return to yoga, I realized that it provided me a whole host of opportunities to learn and grow.  Here are some of the gifts yoga gave to me after my injury.

A few people asked the obvious question, “Will you quit skating?” My standard reply: “What is the point in learning to walk again if I can’t skate anymore?” And yet, in my heart there was a silent agony; though I knew the yoga would help I wasn’t sure I could do it.

In my first class I did 12% of the yoga, at best. I did pranayama breathing while teetering on my left toes…until I just laid in pregnancy savasana for the entire standing series—an eternity on the floor. In my quiet meditation (closed mouth, slow breath, screaming thoughts) my mind was on fire with all that I’d lost. As class came to an end, however, I was breathing more fully, my back was relaxed, and somehow, my attitude had greatly improved. I had survived the first class; I could definitely survive another.

Because of my injury I couldn’t kneel, so I laid during the standing series. In spine strengthening I couldn’t point my toes. My fixed firm pose was just me on my hands and knees, as if I was crawling.

Yoga and roller derby have plenty in common: they inspire humility. Humility reminds us of our limitations without negating our potential. I was reminded of the preciousness of mobility. I couldn’t walk on my own; I couldn’t follow my path; I couldn’t use my toes. I was lost and I was hopeless. I noticed suddenly that my leg trolley had only 3 wheels, not 8. I realized that yoga was not a crutch but a pathway. Whether or not I walked, crawled, or slinked along on my belly, so long as I was on the path, skating was just around the bend.

Every posture begins with intention. One percent of the posture is the posture, if the posture is, as they say, simply to try the right way. In simpler terms, do whatever you can and leave the rest.

I couldn’t stand forward, but I could sit up and stretch my arms forward, triceps muscles contracted. I put extra care into flattening the hands and keeping the fingers together. Without my legs, I was doing more of the upper posture than I had ever done. It was extremely challenging and even though I knew I was getting stronger, I wanted to quit. I also wanted to skate again, so I pressed on, sitting down perhaps, but not giving up.

On day three of broken-leg yoga I put my foot down during pranayama breathing. By day six I had 50/50 pressure on my feet for both sets. On day seven I was completely unable to stand. It felt like a setback but it was the path of healing.

5. A Pathway to Emotional Healing

One week after I broke my ankle, I laid on the couch, sobbing hysterically. My dog jumped onto the couch, pinned me down, and licked the tears from my eyes. I was powerless to resist the love and slobber of this dog. Though most assumed otherwise, I lost hope a thousand times a day.

In eagle pose I couldn’t get as much torque of the arms as I could when standing. Instead I focused deeply on pulling the shoulders away from the ears. I also thought about all the time I had spent at practice watching everyone else skate and I felt the yoga pull the tears from my eyes.

This emotional release filled my lungs with each inhale and I felt more alive than I had since the break. My head cleared. I felt only the dull throb of fresh blood in my ankle. Absent was pain—discomfort, yes, but no pain. Even though I still felt sad and frustrated, I was processing emotions I didn't realize I felt. My mind was bending itself better, same as my ankle.

6. The Ecstasy of Agony

Both of my legs were weak, either from disuse or overcompensation. The broken (left) leg was the real challenge. Keeping 95% of the weight on my right foot I put my left foot down flat on the ground and straightened the leg. From there I added and removed 5% pressure, slowly becoming accustomed to weight bearing. This wasn’t just challenging, it was painful. I was in pain.

In yoga, we say the pain kills the pain. In other words, a certain amount of discomfort in each posture inspires healing. A sharp shooting pain is too much; a dull aching pain is the sensation of progress. Knowing this, I took some pleasure each time I felt a zing of healing pass through me. This was empowering, knowing that my discomfort was activating my healing. This made me desirous of that pain, for it was the path forward. It also made me very tired, most days.

7. A Pathway to Anatomical Healing

Bikram yoga is a series of 26 postures and 2 breathing exercises performed in the same order in every class. Regardless, no class is ever the same. The class does not change, your body does. The class is designed to change your body inside and out; to create a deep awareness so that you can readily notice the evolution of your body and mind. Bikram yoga is a series of postures designed to help you heal yourself.

An apex jump is an advanced maneuver in roller derby where a skater jumps over the top of the track, and the legs of the other skaters landing in bounds. The weekend before I broke my ankle I had, for the first time ever, successfully jumped an apex. Days later, I reluctantly took a year off to do some yoga and meditate on it. I would skate again after 4 months of regular practice. My teammates remarked that it was as if I had never broken my ankle. It still took more than a year of constant skating and yoga practice before I did it. But I did. I jumped an apex again.

ALL ARTICLES BY Laurel "Astral" Hanson