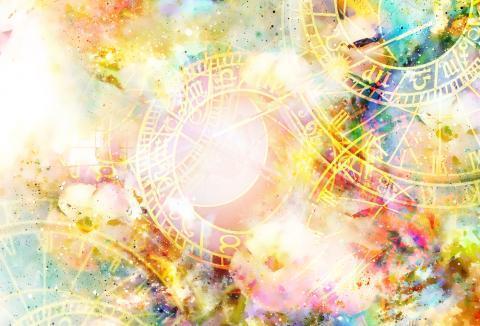 Integration of information is the theme this week with the conjunction of Jupiter and Mercury coming together to the exact degree in the sky.  There are a lot of layers to discuss as far as this is involved with these two planets, both positive and not as positive.

It’s important to know that Jupiter and Mercury are what’s known as gentle planets in Vedic Astrology.  This means that these planets bring about an energy of making things better by allowing more grace and finding the best possible options, respectively.  This is echoed throughout various traditions and practices of Vedic Astrology as far as methodologies of chart interpretation and goals of the application of astrology go.  One of these is a style of Vedic Astrology attributed to a sage named Jaimini.  In Jaimini Astrology, as it is called, Mercury and Jupiter are known to help any sign and its inhabitants flourish if they are influencing a sign either by their aspect or by being placed in a sign.  This is different than all the other planets who tend to make things more difficult to varying degrees, just help a little, or don’t hinder nor help.

According to the rules of Muhurta, which is a Vedic Astrological technique related to finding an auspicious time to begin an event, having Jupiter in the 1st, 4th, 7th, or 10th house of a chart can do a lot to make the whole chart and the related event go smoothly.  It essentially provides enough grace to overcome any obstacles that may take place.  Mercury is also said to make things work out better if similarly posited but is not mentioned as often nor as primarily as Jupiter.  In Prasna (horary astrology), very similar rules are given to the placement of Jupiter and Mercury as well.  In fact, having a strong and well-placed Jupiter in a chart in general is said to be a boon to the individual.

This is important to consider as we look into what is called the “natural relationships” of the planets in Vedic Astrology.  This gives us a sense of how the impact of the influence of planets will play out in either a friendly, inimical, or neutral way: basically either helping, hindering, or not doing either.  The thing about these two planets is that they are not mutual friends nor are they mutual enemies.  Jupiter receives Mercury’s influence as inimical and deleterious to performing its natural agenda.  Mercury receives Jupiter’s influence as neutral in the sense that Jupiter doesn’t support nor hinder Mercury from its agenda.  So, it’s a one-way hindrance of Mercury to Jupiter.

Now, placing this inimical influence of Mercury to Jupiter into perspective correctly, it is imperative to remember that these two planets have a big potential to help things work out more smoothly in one’s life.  What this means is that this enmity of Mercury is not one of cruelty, of malice, or of being outwardly destructive towards Jupiter.  Its influence to Jupiter more so frustrates and complicates matters.  The way that Mercury typically creates frustration is related to and derives from information in some manner.  Let’s look at why this is the case and how this can manifest.

Since we’re looking at how Mercury and how its information-based nature can hinder Jupiter, naturally it makes sense to further explore Jupiter and its energy.  Jupiter is very strongly related to the sign of Sagittarius, which shows us that Jupiter is related to our goals, sense of purpose, and setting us along a path in life.  Jupiter is also related to one’s philosophy, religion, and belief systems.  Essentially, it’s about how one sees the world in a large sense and how one plays to act in it accordingly.  The key here is that how people plan to act and go about their goals is a path that they believe is the best and is achieved by how they process the pool of information that encompasses their goals.  It’s about holding the big picture and finding out how to best move forward—that is the nature of Jupiter’s energy within this context of discourse.

Where Mercury starts to derail things is in the integration of this pool of information.  This can work in a variety of ways.  One way is that it can be related to too much information being taken into consideration at one time.  This can bring about uncertainty and indecisiveness as every time one starts to create an idea of how to move forward they then think about another fact or option that may also work.  Whereas this can make one very wise and extremely considerate, it can make them very slow in getting things moving and lead to inertia at times when action is needed.  It’s like spending too much time trying to make sure every possible option and consideration is taken into account at the expense of any progress actually being achieved.

Another facet of Jupiter’s energy is it brings about optimism and a certain level of controlled excitement and enthusiasm.  In this consideration, Mercury can work in an opposite manner and create a certain type of naiveté.  Instead of making one hesitate, it can actually do the opposite where it can make one start to pursue a new path that looks very promising without really thinking it through and if it is the right thing for them.  For example, let’s say one has a plan to save money through investing in the stock market and that person has been following this set plan for awhile.  Then, all of a sudden, a new stock becomes available that looks lucrative and then without considering how it will work with the plan that person just starts heavily investing in this stock.  Then there may come a point in time when they realize that they have misappropriated their investments when they take the time to look at the big picture again.  This is the type of naiveté that it may bring about because it encourages a willingness to try something new without fitting it into the bigger picture first.

The key here is that the integration of information gets disrupted.  Instead of this process of moving in alignment with the bigger picture, one gets either slowed or distracted from this.  With this in mind and this happening in the sky this week, this is a perfect time to press the pause button and get in touch with one’s greater sense of purpose and the scope of what achievements are desired.  Now is the time to assess where one is currently at, what obstacles one is facing, where one is going next, and whether to make a course correction if one has gone astray from the bigger picture.  This is also a time to fully vet any new courses of action to be considered that may take one in a new direction, no matter how promising.  Sometimes even though it looks great and fun, it may not be in one’s best interest when considering the big picture.  Fun and enjoyable times in life can be few and far between and we do need to stop and smell the roses, but just make sure it isn’t overall detrimental.