Your Guide To Summer Flowers: Star Of Bethlehem 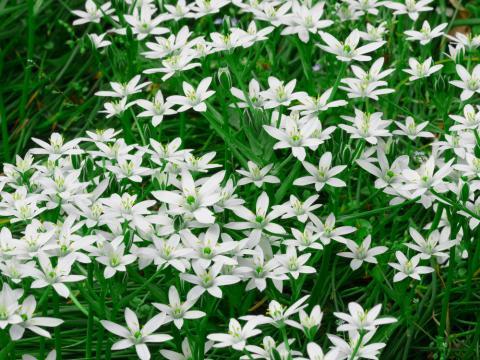 Star of Bethlehem is a member of the family Liliaceae or Lily family of the genus Ornithogalum L. or star of Bethlehem P, containing five species. The Star of Bethlehem is native to areas of Africa and Europe and is also referred to by its scientific name, Ornithogalum, and other nomenclatures including Arabian star flower, wonder flower, and the florists’ nightmare because it is a hardy plant while growing and maintains its freshness after the flower is cut for approximately two weeks. The flower symbolizes purity, hope, or happiness and love. It is given as gifts of apology, for weddings, and romantic occasions. It is a versatile plant that is used as a healing herb and made into flour for making aromatic bread. The essence of the flower is an ingredient in Bach Flowers.

The Star of Bethlehem plant is a bulb-based perennial that can reach a height of about eight to twelve inches. Its white bulb is approximately one inch or less in length and an inch or more in diameter and produces a fibrous root base that clumps with maturity and forms up to seven secondary bulbs. From the bulb emerges a leafless flowering stem that grows erect. The white star flowers and matures up to twelve inches and the plant produces up from three to ten blooms, each having six petals that grow from one-half to three-quarter inches in diameter and, depending on the species, can have flowers that are green with white margins. The subtle fragrant blooms emerge in April and May and last about two weeks, opening in the morning and closing by noon. The Star of Bethlehem plants grow six to ten leaves that mature to four to twelve inches in length and two to five inches in width and are waxy and dark green in color with a white mid-rib and arch as they grow.

How To Grow Star Of Bethlehem

The Star of Bethlehem grows best in temperate zones throughout the world. In warmer climates the plant does not need to be mulched but it is recommend in colder regions. Plant the bulbs in areas of full sunlight to a depth of five inches and space the bulbs in containers or surrounded by edging deep enough as to prevent the plants from becoming invasive.  It is also advised to deadhead the flowers before seeds develop and there are no maintenance requirements for this plant.

Because the Star of Bethlehem plant is prolific it makes an excellent container plant. In the garden it can easily take over and become a nuisance and in some regions of the world they are considered weeds. There are several states in the United States that have put the Star of Bethlehem on their invasive exotic list and Alabama considers it a noxious weed.

The plant has been used in traditional medicine. In an extract form it was used as a treatment for depression and anxiety, as a sedative, and for those individuals that have had a nervous breakdown.

Precautions When Handling Star Of Bethlehem

Star of Bethlehem is a highly toxic plant and it is advisable to use gloves when handling any part of the plant as the entire plant is poisonous. The bulb contains alkaloids which can cause skin irritation to individuals with sensitive skin and it is poisonous to grazing animals. If the plant is ingested it may cause dilated pupils; nausea, vomiting, and intestinal irritation; swollen lips, tongue, and throat; and shortness of breath. In severe cases abnormal heart rate can occur.