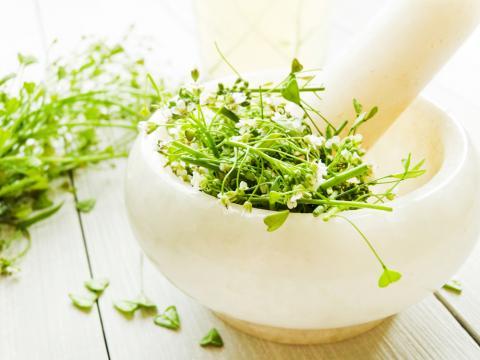 Shepherd’s Purse (Capsella bursa-pastoris), is a common weed in the Mustard family. It is not native to North America, but was introduced by Europeans and has since naturalized to all states in the U.S. and provinces in Canada. Shepherd’s Purse is common along trails, sidewalks and roads; in disturbed areas; in lawns; and as a volunteer in gardens.

The name Shepherd’s Purse (bursa-pastoris) reflects the fact that the seed pods resemble the traditional pouch carried by medieval shepherds in Europe. The pods also look like upside down hearts, which makes it an easy-to-identify plant when it’s in seed.

Given that Shepherd’s Purse has established itself over the entire continent, it’s perhaps not surprising that it’s easy to grow if you can’t find a good source around you.  All you need are some seeds and any fair-to-middling soil.  Shepherd’s Purse loves disturbed soils…just scratch the dirt, toss in some (brown) seeds and cover, water, and you’re good to go.  It’s happy with full sun. It’s happy with part shade. It’s just dandy in damp or dry soils.  It’s a fast-growing plant, so you’ll get multiple rounds of your Shepherd’s Purse crop each season.

Shepherd’s Purse has been used as food and medicine across multiple cultures and traditions, from Western Herbalism to Traditional Chinese Medicine, Ayurveda and Tibetan medicine.

Some uses of this common weed:

The young greens are tasty. If you’re familiar with plants in the Mustard (Brassica) family, you’ll recognize the spicy flavor. The seeds and the root are also edible and spicy.  Just make sure you’re harvesting the plant from a clean location.

Much of the medicinal benefit of Shepherd’s Purse comes from its ability to staunch excess secretions, including bleeding.  Here are some things it can help with:

Some of the most common uses for Shepherd’s Purse are related to the urinary tract.

It supports your digestive tract while you eat it! Here are some things it can help with:

If gathering one’s own Shepherd’s Purse to use as medicine, get it while the seeds are still green.  Use fresh or freshly dried for tea, make a fresh plant tincture (make a new one each year), or juice and freeze.  The dried herb loses activity after just several months. If purchasing, get it as a fresh plant extract.