Benefits of Yoga with Rock, Rap and Hip Hop Music 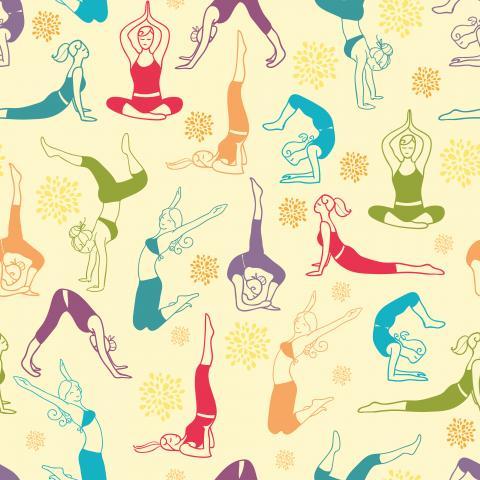 You’ve seen the classes before. They’re often listed as “Rock ‘n’ Roll Yoga” or another less zen-sounding name. Personally, I teach classes called “Namaslay” and “That Asana Though,” one with a rock playlist and the other featuring rap and hip hop. Of course, listening to pop music while working on your flow is far from traditional. It’s certainly not what the original practitioners of yoga envisioned when they came up with the asanas! However, almost nobody practices yoga in modern times like it was originally practiced. That’s okay!

Yoga as we think of it today consists largely of a series of poses with a relatively short savasana to end the class. The first yoga practitioners used a variety of poses to stretch their bodies in preparation for hours of seated meditation. There was simply no way they could sit still and meditate without first working out any kinks in their body. Makes sense, right? However, it’s very likely that most of us could sit calmly or lie in savasana for five minutes without 60-90 minutes of stretching to “prep” our body.

Yoga isn’t what it used to be. It’s evolved, we’ve evolved, and it turns out that a lot of people like their yoga with a side of non-Enya music.

What Pop Music Does

Numerous studies have shown that music can change or amplify your mood, your heart rate, your focus and more. Depending on what type of yoga practice you want, the right playlist can make a huge difference. When attending a class with a rock or hip hop list, you can bet it will be bootcamp style, a heartbeat-raising Vinyasa class, and you’ll feel like you got in some serious cardio along with the stretching, strengthening and lengthening you need.

Consider this: In some of the most competitive marathon races, elite runners aren’t allowed to listen to music. In fact, the winner of a recent marathon had to give up her title when it was discovered that she slipped in some ear buds for a few miles. The organizers of elite events know that music gives athletes an advantage.

Why should yoga be any different?

Pop music also has an added benefit of providing comfort via familiarity. For some new yogis, the quiet, ohm-ing, gong-using yoga classes can be overwhelming, intimidating and too foreign. For those who have been practicing for years, familiarity can breed contempt and boredom—that’s not a very good combination to encourage a lifelong practice! Humans crave both new experiences and the reassurance of the familiar. A recognizable playlist that makes you want to sing along and dance is a great way to instantly get into the groove of the class and feel like you’re in a community who “gets you.”

This doesn’t mean you should only go to rock or hip hop yoga classes, or that you should even keep going if you try a few out and find it’s not for you. However, knowing that they can offer a more cardio-rich experience, a quicker way to raise your heart rate, a more comfortable environment and maybe even the fun of going through warrior poses to Patty Smyth’s “The Warrior” can bring some much-needed shaking up to your yoga routine.

ALL ARTICLES BY Jessica Mehta