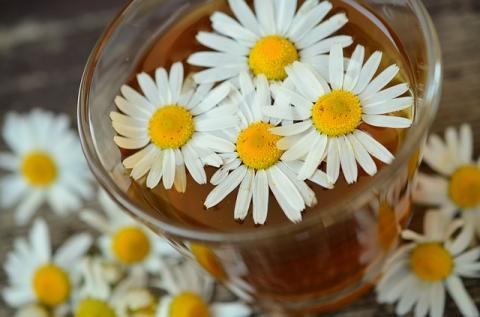 Chamomile (Matricaria recutita) is intensely fragrant and very pleasing to look at, but don’t let the perennial’s cute, daisy-like appearance fool you. Centuries ago, the flower was used in certain areas of Greece, Egypt, and ancient Rome for its many healing purposes. The medicine is said to be contained in the flower area of the herb, which contains strong oils. There are many kinds of chamomile, and they can be used in things like teas, oils, tinctures, soaks, homemade salves, vapors, washes, and more.

Interested in knowing more about the healing characteristics of chamomile? Check out these 10 therapeutic uses for chamomile!

Roman chamomile (sometimes known as English chamomile) is often ingested for the purpose of bringing down swelling and inflammation of the body. It can easily be consumed in a tea, oil, tincture, or capsule form.

Now here’s something you can stomach! Both German and Roman chamomile types have been suggested to help in healing problems regarding the stomach. The flower has been used to aid with aliments such as stomach ulcers and sores, stress-related flatulence, bacterial infections, and more.

Skin conditions such as eczema, burns, rashes, and minor skin sores have been treated using chamomile. Some of the recommended ways to apply the herb to the skin is by using a chamomile balm, salve, or diluted oil mixture.

Many women who choose to birth their baby vaginally may end up with a few anogenital sores, which is why they may want to keep this herb handy. My midwives provided me with herbs for a sitz bath in order to help soothe and heal the sores I acquired from giving birth naturally to my son. One of the main herbs given to me was chamomile. It has long been used to bring natural relief to hemorrhoids, genital sores, and anogenital infections.

Here’s another reason to love this tea! It has been known to be a way for women to naturally deal with premenstrual syndrome (PMS) symptoms such as menstrual cramps and headaches.

Muscle spasms can occur in many different parts of the body, and they can be very painful. According to an article published by Science Daily, drinking German chamomile tea was associated with an increase in urinary levels of glycine, which is an amino acid known to assist in relieving muscle spasms.

Still awake, having trouble sleeping? Try sipping on some chamomile tea! If there is anything that chamomile is well known for, it’s helping with sleeping disorders. German and Roman chamomile are both said to help people with insomnia sleep better.

Because of its antispasmodic as well as anti-inflammatory properties, chamomile is said to be useful in soothing or helping to relieve minor digestive issues such as inflammatory bowel conditions, digestive discomforts, irritable bowel problems, gastritis, and gastrointestinal problems. It has also been suggested to drink chamomile tea after meals to help ease digestion.

Stress and anxiety can escalate to other problems for the body. This is where chamomile comes in! This herb is said to be great at helping to reduce feelings of stress and anxiety. Some popular ways to do this is by vapor or oil diffusing, teas, and bath soaking. One of my favorite ways to de-stress is drinking a warm cup of chamomile-lavender tea.

Yep, you read right! This herb has been used to help relieve undesired symptoms that babies might have while teething. Babies are often given chamomile tincture as a natural way to help relieve inflammation of the gums as well as calm them. An herbal website called Learning Herbs suggests freezing chamomile tea into popsicles for the babies to suck on.

These ten therapeutic uses for chamomile are only a chip off the iceberg when it comes to exploring the many healing properties of this extraordinary herb. The great news is that the tea is easy to find in most grocery stores. Most whole or health food stores carry dried chamomile flowers, or you may be able to find some fresh at a local farmer’s market as well. Another great option is to grow your own chamomile flowers, which would be cheaper as well as more sustainable.