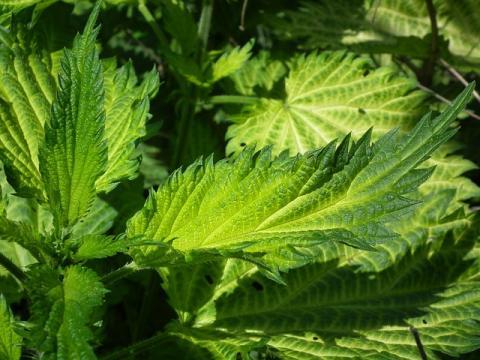 The first time I encountered the stinging nettle, I was unaware. I met its dark green leaves at a friend’s house (a friend who has a definite imp on her shoulder) and she asked me to touch them. Unsuspectingly and whole-heartedly I did, to a hand that felt it had just been stung by a million different bugs. Admittedly, it’s not very painful, but it does leave you with a buzzy feeling of ants walking down your veins. However, the rather prickly exterior of this plant hides many benefits within.

Why Does The Stinging Nettle Sting?

The leaves and stems of this plant are covered with fine hairs, which act like micro needles. When you brush up against this plant, the tip of the fine hairs break and the base becomes a needle that injects potent chemicals like serotonin, histamine, and acetylcholine that cause pain, redness, numbness, and swelling. It’s a defense mechanism of the plant, much like a rose or cactus has thorns.

That said, it does have a host of benefits, but don’t worry – you don’t have to get stung to reap them from this plant.

Why Should You Include Nettle In Your Diet

Nettle leaf, despite its rather bad temper, hides a host of benefits that can be reaped by eating them. Here go a list of them that will make you reach out for it, even if you have to don thick rubber gloves!

How To Pick Nettle Leaves

To safely pick nettle leaves and avoid the sting, don thick gloves and use tongs to pluck the tender leaves on top – leaving the bottom leaves and stem intact for the plant to further grow and flourish.

You might have known nettle leaf as a tea, now let us introduce you to nettle leaf greens or saag in Indian cooking.

A traditional Indian dish often cooked in and around the foothills of the Himalayas, nettle leaves are valued for their iron-rich properties and other healthful benefits also. This is a seasonal plant that grows mostly in Indian winters.

To make: Pluck and wash the nettle leaves while wearing thick rubber gloves.  Blanch the leaves in hot water for a minute or so and then transfer into a deep-bottomed pot, adding ½ cup water and a little salt, and cook them further for 10 minutes or so till the leaves have softened. Use a blender to puree the cooked leaves once cool.

In a pan, add the oil and let it smoke. Add the mustard seeds and let them sputter a bit, and now add in the pureed leaves and cook for another 5-10 minutes till the puree has thickened. Add salt and pepper to taste. In case it tastes a bit bland to you, you can further garnish with chopped garlic, 2-3 tbsp cream and some cooked and chopped chicken as well. You can serve this with rice, roti or even as a side dish for some tasty health.

The taste of nettle is similar to that of spinach and you can further choose to use nettle leaf pure in soups, pasta, or curries as you wish. We hope you enjoy this and do let us have your feedback in the comments section below. Namaste!