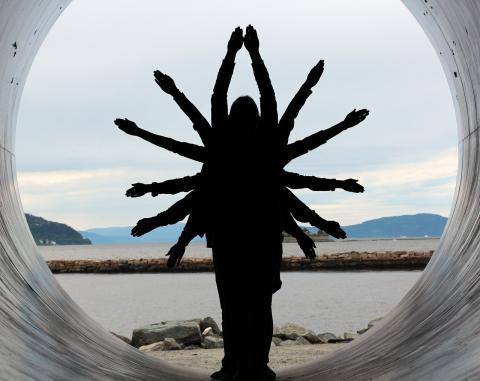 There has never been a more alive time to know Kali than now, during what Vedic texts and other ancient scriptures deem the Kali Yuga—or era of Kali, era of Vice—which is what the current 1000 years we are in is called. Kali is the fierce and Dark aspect of the Divine Feminine who is comfortable with her rage, using it to call forth great change and destroy all that no longer serves.

Kali kind of reminds us of Shiva doesn’t she? As Shiva is often known to be the god of destruction, Kali is Shiva’s consort, where he is depicted lying beneath her feet while she dances on the cremation grounds with a necklace full of skulls, chopping off the heads of ignorance. In this aspect, Shiva is the masculine part of consciousness who is holding reverent space while the feminine rises to the occasion of demolition-queen. Sometimes reality just needs a good wake-up call and that is the job of Kali—the Mother aspect of Divine Consciousness who can just not take the ignorant behaviors and attitudes anymore—and she does something about it.

In this aspect of the Divine, Kali represents the “I” that exists outside of time. She is the eternal void, the dark matter of existence, the counter-point to time and incarnation. She is that which is unafraid to wipe out the existing creation in order to “turn the cycle” and smear together the darkness of this world in order to bring all back to the zero point of creation. She is the unknown and the unknowable. She is the force of love which is so fierce that it supersedes any creation and is without attachment to form. She loves for the sake of Eternal, Divine Love, swallowing up the darkness of ignorance into her own darkness—producing light.

My Experience of Kali

I hold a special place in my heart for Kali. I was introduced to her form while in India. I believe it was first while engaging in the tradition of smoking hashish from a chillum. The lit pipe would begin with a prayer—“Boom Shiva!” (as Ganja is largely associated with the God Shiva who would use it to assist him in reaching deep Samadhi)—and proceed by passing the chillum to the right. However, the initiator could always choose to pass in the direction of “the Mother”—to the left. With this decision, the pipe-bearer would simply declare “Boom Kali” and then pass the chillum to the left. I couldn’t help but note the significance of how passing to the left was somehow “non-traditional” and against the grain of the norm. I immediately identified myself as resonant with this Kali Ma. She and I had something in common, we did not do things like everyone else.

Kali and the Self

When choosing to connect with the aspect of the self which is Kali you are allowing your consciousness to become aware of the fierce divine feminine aspect which lives in us all. It is she, that part of us, which has been forcibly “put to sleep” in the world of ignorance, or through the constructs of societal regime. She is the creative aspect of every man, woman, and child who has not been allowed to express itself, who has been kept quiet too long, been kept small and been hidden from the eyes of the world due to her wild nature. Connecting with Kali within is asking that wildish self to re-emerge, to come forward and fearlessly dance upon the paradigms of the old which no longer serve the evolving consciousness.

Kali is the Mother within each one of us who has been chained up in the prisons of humanity, behind bars of mental beliefs and images of a world built up without her hands. She is the Mother who lost her children to slavery, who sold her body for resources without her consent. She is the connection we have to the Earth herself...and how each one of us truly feels deep down inside, about the condition of the planet, if we but allow ourselves to feel, deep enough. This righteous rage of Kali lives in each one of us—as the Liberator. This world we walk in has trained us not to express this part of ourselves, and yet she cannot stay caged forever. She is real and she is angry with love and desire to free us all into the condition of our Eternal natures.

When invoking Kali within, we must do so with care for what may emerge upon her calling. Unholy structures must fall, beliefs and language which are only self-serving and do not include the collective of compassionate humanity must go. She is the housecleaner who dances through the battlefields of life and calls out the false matrixes at play. She is the one who would shut down the factories making a fortune off of child-labor or animal cruelty. She is the muddied feet dancing over the tables of Congress to bring shame to the unrighteous laws being passed there. She is the part of us who both feels that Earth is our home and we must protect her—while at the same time feeling “not from here,” in an off-planet, unattached to the outcome of her actions sort of way. She is the part of us who cares only for the results of her rage…that those things which should no longer stand due to their ignorance do not stand.

I have never felt a more important time in reality for Kali to emerge in all women (at the very least). Right now this earth is a giant home in chaos. Women have been shut down and taught, in so many cultures worldwide, to stand back or keep their opinions to themselves or to follow the lead; this can no longer be the case if we are to evolve as a species. Kali must come forth in all of us. We must not be okay looking away from what is discordant to us all. We must not fear our inner rage and what will come of it if we let it out in alignment with truth and compassion.

In order to call forth Kali within we could use words like this:

“I now choose to invoke the aspect within me which can no longer look away from the ignorance, which can no longer tolerate intolerance, which can no longer watch the atrocities of this reality, against children, against women, against people of color, against animals, against the Earth herself. I invoke Kali in me to bring forth the Divine Rage which cuts through the illusions of ignorance, which slices through the illusions of false truths and false safety, to the heart of this reality. I call forth my Divine Feminine Mother self, full of fierce loving rage so that I may take back for the Earth what is hers, for the Children what is theirs, and for the beating Human heart what is the Divine Birthright of all humanity. I call forth the part of me who fears nothing, who knows that my Divine Consort and Beloved—the Consciousness in me which is Shiva-mind—still pointed, calm, and resolute—is standing ground under me and for me. I now choose to activate the Divine Rage of the Mother of us all—in form—so that I may begin to participate in the great change which must now come at this stage in Human Evolution. I choose to allow the incineration of the old, the death of the old ways and the removal of a paradigm of regret and sorrow in order to usher in a great transformation of the Ages…which is the role of the Kali in me. And so it is. As the Butterfly bursts forth from the Cocoon, so too does Kali—in me—burst the fabric of Creation in order to reveal the next cycle. “