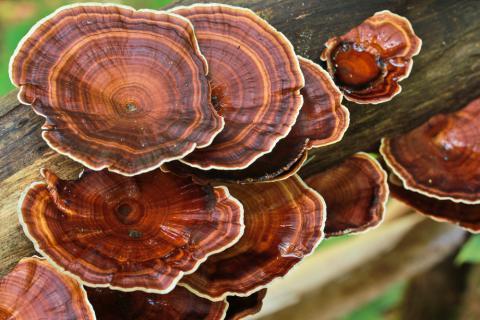 Thank your liver daily.  The liver deals with almost everything that enters the body via the mouth, nose, and skin, sorting out the good from the bad and processing the bad so that it doesn’t damage the rest of the body. On top of this, the liver also controls cholesterol levels, regulates the amount of sugar being released into the blood, and even influences sex hormone levels.  The liver has many other jobs as well.

The liver takes some hits while doing its many jobs. Liver cells may be damaged by toxic chemicals like alcohol, certain medications, free radicals, hepatitis viruses and other microbes, or a diet high in unhealthy fats. Chronic insults to the liver over years may lead to hepatitis, cirrhosis, and, possibly, liver cancer.  All of these have inflammation and oxidative stress (a high free radical load) at their root.

Here are three great anti-inflammatory, antioxidant and liver-protecting mushrooms for sending some appreciation to this life-sustaining organ!

Many medicinal mushrooms are also tasty food. Turkey tail mushrooms, however, are not in this category. They’re too tough and chewy. But they’re great medicine as a strong tea, liquid (alcohol) extract, or powdered extract. I generally prepare turkey tails as a combination of strong tea (called a “decoction”) and alcohol extract.  I used to find lots of turkey tails growing on logs and stumps while in California. Oddly enough, they could also be found slowly devouring the wooden porch belonging to my first medicinal mushroom teachers. Turkey tails are harder to come by here in dry Southwestern Colorado—though they’re not difficult to find with a little online foraging.

A traditional liver tonic, turkey tails have also captured the notice of modern researchers.  Turkey tails help protect the liver from damage by noxious chemicals—for instance, reducing the damage that acetaminophen can do. (Acetaminophen is a common over-the-counter pain reliever in the U.S., and acetaminophen overdosing is the reason for about 50% of the liver transplants annually in the U.S.)

In Asia, certain extracts of turkey tails are given together with chemotherapy by doctors for a variety of reasons, one of which is reduction of liver damage from these strong drugs. Turkey tails were also found in a small study to improve the quality of life in folks dealing with liver cancer. I don’t recommend combining mushroom or plant extracts on your own with chemo drugs…the wrong combinations may interfere with treatment rather than help. Work with a practitioner.

Turkey tails have traditionally been used for support with hepatitis. Hepatitis literally means “liver inflammation.”  This amazing mushroom also reduces the level of oxidative stress in the liver. As mentioned, oxidative stress means a high level of free radicals. Free radicals damage cells in a process quite similar to the way that rust damages metal.

Reishi is another traditional liver tonic. As with turkey tails, you’d be hard pressed to eat reishi mushrooms…it would be like chewing on a piece of wood!  This mushroom has been revered in Asia for many centuries and was called the “Mushroom of Immortality” and the “10,000-year Mushroom,” reflecting its use for longevity.  Rare in the wild, reishi was reserved for royalty until someone figured out how to cultivate it. Now it’s widely available. I use it the same way as turkey tails, in a combined decoction and alcohol extract to capture a variety of the beneficial mushroom components. You’re unlikely to find this one growing in your back yard, but reishi’s popularity means that it’s easy to find in health food stores and online.

Like turkey tails, reishi helps the liver neutralize toxic chemicals, protecting the liver itself and the rest of the body.  In addition, reishi contains a variety of antioxidants that reduce “rust” in the liver. Certain enzymes in the liver, like “AST” and “ALT,” become elevated upon damage to liver cells. Studies show that reishi and other mushrooms decrease the level of these enzymes, reflecting reduced damage in the liver.

Reishi also helps the liver with its job in cholesterol regulation. Though cholesterol gets a bad rap, it has many important roles in the body.

Unlike turkey tails and reishi, oyster mushrooms are edible. Sure, you can use oyster mushroom decoctions or other extracts. Or you could simply introduce this delicious mushroom to your diet. When cooking it, slice it thinly and place in a single layer in a pan heated on medium. Sprinkle with salt and cook them to evaporate the water. Then add ghee or coconut oil and whatever herbs or spices you want and cook some more.  I learned this dry sauté method from a fellow herb student (who’s also a chef) while on an herbal excursion/camping trip in the pouring rain. We came across a tree loaded with oyster mushrooms and had a feast under a tarp strung up amongst the trees.

Like reishi, oyster mushroom influences cholesterol levels via effects on the liver. And, like turkey tails, oyster mushrooms were found in studies to protect the liver damage by acetaminophen and other potentially toxic chemicals.

Oyster mushroom may reduce the damage that a high fat diet can do to the liver and may even lend some protection against diabetic effects on the liver.  As with all medicinal mushrooms, oyster mushrooms have a wealth of antioxidants to help protect the health of liver (and other) cells. In a rodent study, oyster mushroom also showed preventive effects against liver cancer and also improved the activity of a standard cancer drug in reducing tumor size in a model of liver cancer.

These are just a handful of liver-loving mushrooms. Many others are also good to check out: shiitake, cordyceps, button mushrooms, lion’s mane and others. Given that we are now exposed to a wide range of not-so-healthy substances that didn’t even exist a century ago, it’s not a bad idea to get friendly with some of these mushroom allies.