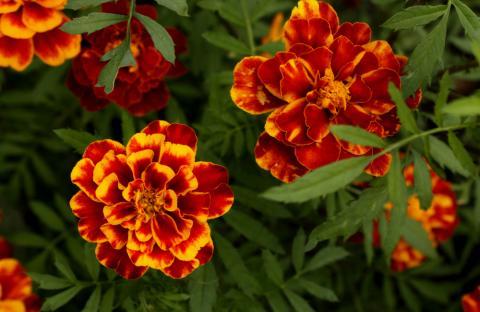 African marigolds are a member of the family Asteraceae or Aster family of the genus Tagetes L. or marigold P and contains eight species. The plant is native to the Americas and was cultivated by the Aztecs who held them as a sacred flower and used them for medicinal purposes; thus it is also known as the American or Aztec marigold. The Aztec uses of marigolds were first documented in 1552 in the De La Crus Badiano Aztec Herbal where it is noted that the plant was used as a treatment for hiccups. The Spaniards brought the Aztec seeds to Spain where the monks cultivated them in their gardens and they were then introduced to France and Northern Africa. These African plants were bred to be taller then brought back to America where they became known as African-American marigolds. In India the flower was incorporated into Hindu ceremonies and in Mexico and Latin America marigolds became a primary decorative flower for village festivals, in the homes, and to decorate alters. The African marigold, however, does not contain any significant health benefits—it is the variety calendula that is used as a healing herb.

African marigolds are the tallest of the genus and can reach heights of five feet and spread from six to thirty-six inches wide. They bloom from spring to the first frost in the fall and produce a clustered flower in hues that include reds, oranges, maroons, yellows, and mixed colors. They have a pungent odor that some find unpleasant. African marigolds are a popular landscape plant that has been bred in several varieties: as an edging plant, as compact bushes that fill spaces around perennial foliage, and as container plants . Their aroma was once believed to repel insects, and marigolds emit a substance known as thiophene into the soil which inhibits the growth of nematodes that cause root-knot in gardens.

African marigolds are easy to grow

African marigolds can be grown from seed starting indoors around March or April or sowed outdoors after the last frost. They like full sunlight and do well in sandy, clay, or loamy soil and thrive in moist, well-drained areas. They can be planted in the shade but this will result in late blooming. They should be planted eighteen inches apart and deadheads should be removed to encourage new blooms.

African marigolds have many uses as an ornamental addition to the garden. They are an annual that blooms throughout the growing season and their colors stay vibrant up to the first frost. In warm climates they bloom the entire year. They are used as a border along walkways and around flower beds; the tall varieties accent other flowers as a background plant and bush varieties fill spaces. They do well as a container plant, giving a creative accent to the patio or porch.

African marigolds are hearty plants but they do attract some problems. They tend to be a target for spider mites during dry weather. Spittle bugs and grasshoppers find them delicious while earwigs, snails, and slugs can devastate marigolds. They are prone to diseases like fungal stem and root rot and they also attract pests like aphids, leaf miners, and white flies. Plants should be checked regularly for them and it is advised to use appropriate products to control them. Other diseases found on African marigolds are alternaria leaf spot, botrytis, and Pythium.

African marigold popularity in the United States was due to David Burpee, the son of W. Atlee Burpee. In 1915, he decided to feature them in the company catalogue and funded research on their breeding. The research resulted in hundreds of new varieties and reestablished the plant in its native America.