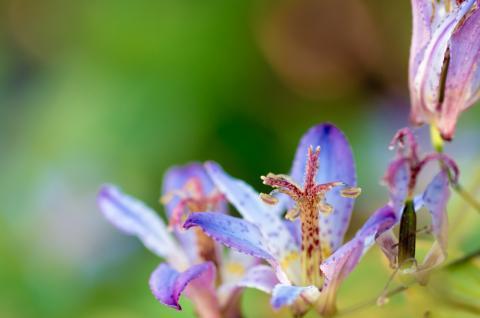 The toad lily is a member of the family Liliaceae or the Lily family of the genus Tricyrtis Wall. or tricyrtis P having one species Tricyrtis hirta (Thunb.) Hook. commonly named toad lilly P. Toad lilies are native to Asia and are a hardy plant that does well in the temperate zones from four to eight. They bloom from late summer to early fall and are an excellent shade plant that does well in containers or as a border accent. These tropical looking flowers come in several varieties and are easy to grow. Toad lily blossoms are an important source of nectar for wildlife to provide energy to butterflies and hummingbirds for their southern migration. The genus name Tricyrtis was derived from the Greek words “tri” meaning three and “kyrtos” which means swelling, arched, bulging or humped because of structure of the flower. The common name toad lily was given to the plant because of the spots on the blossom; however there are more colorful stories as to how the plant was named. One famous tale was that the people of the Filipino tribe known as the Tasaday would rub the flower on their bodies when they went frog hunting to attract them.

Toad lilies blossoms are less than an inch and have six petals. There are many flowers that grow upright on the stem that are white in color with speckles that can be red to purple in hue. They look like tiny orchids. The leaves are shaped like a lance and have a fuzzy texture with some varieties having a brown mottled coloring. Other varieties have bell shaped flowers and others can be star shaped.

How to grow and care for toad lilies

Toad lilies are perennials and prefer shade in warmer climates and can be planted in partial shade or sunny areas in the colder climates. They grow to a height of two to three inches and like moist soil and regular application of a weak fertilizer mixture. They should be planted in the spring to get late summer and early fall blooms. It is advised to make a garden plan if toad lilies are included in the garden.

Toad lilies, while a hardy plant in less idea conditions, might attract slugs and snails that will eat the spring leaves. These predators are kept away if the soil is nutritionally balanced. Though they do not attract deer, rabbits will eat new growth plants. A resent disease known as Tricyrtis floral virus has become a problem causing the plant to become mottled and turn purple this will not kill the plant but it will affect the color of the blossoms. There is no cure but to remove the plant and do not compost it.

Toad lilies’ history prior to the late 16th Century is not clear. The Japanese call the plant “hototogiso,” which translates to “little cuckoo.” It is said that Japanese gardens have included them in their gardens and as container plants. Carl Peter Thunberg was the first to document toad lilies in 1776. The plant was introduced to Europe by Sir Joseph Dalton Hooker in the mid-18th Century. Later in the century it was brought to America and cultivated in Cambridge, Massachusetts and in New Zealand. By the 1950’s, toad lilies were made available for purchase, becoming a popular addition to the garden by the 1990’s due to a high evaluation in a program held by the Chicago Botanic Garden. During that period, more varieties were developed both in the United States and Japan.

Toad lilies are a member of the Lily family and are native to Asia. They were brought to Europe in the mid-18th Century, and to America and New Zealand at the end of the 1800’s. They are a late summer and autumn blooming shade plant that resembles an orchid and brings color to the fall garden. They are an excellent border plant and do well in containers. It is advised to plant them in the spring for late summer blooming.