Your Guide To Flowers: Colchicum 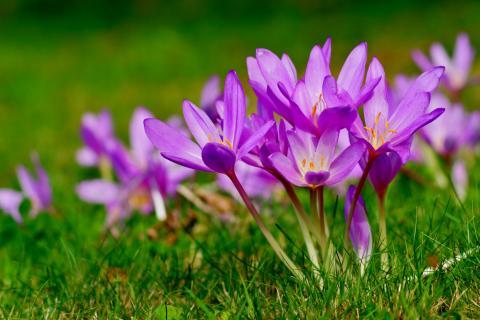 Colchicum belongs to the family Liliaceae or Lily family of the genus Colchicum L. or colchicum P that contains two species. Colchicum autumnale is also known as autumn crocus or meadow saffron. It is an early fall blooming perennial and is used in areas where summer flowers are fading. They are usually not used as a border plant because of their unsightly spring foliage. Colchicum was brought to America by Benjamin Franklin, who in 1790 documented the plant as deadly poisonous but used to treat gout in small doses. The plant was named in honor of the kingdom of Colchis that was located on the Black Sea in the region that is known today as Georgia. It is also used to make seedless watermelon. As a healing herb, a fresh bulb of the plant has several uses, including relieving joint pain and the discomfort of rheumatism and many other common disorders. Because of the way colchicum grows it is important to make a landscape plan.

Colchicum is a bulb plant that produces five to eight leaves that are dark green in color with a chocolate hue. The foliage grows to approximately ten inches in length and by early summer turns to yellow before dying; then the plant becomes dormant. In late summer or early autumn leafless stems emerge from the ground, growing from six to ten inches in height, and a star-shaped bloom is produced in colors ranging from lavender to pinks with six stamens.

Growing colchicum in the garden

Colchicum is easily grown and maintained in the garden and adds color to the landscape when the summer flowers fade. It is best to purchase dormant corms to be planted immediately in late summer in organically rich soil that drains well and is located in full sun to partial shade. Each corm should be planted three inches deep and six inches apart in fertilized soil. They should be planted in areas that contain short fall flowers, and water them regularly when the plant is in bloom and in the spring when the foliage is green—then stop watering during the dormant stage. When the area becomes crowded, which is usually in three years after first planted, dig up the corms, divide them, and replant.

The healing uses of colchicum

Colchicum has several uses as a healing herb, like the treatment of joint ailments—especially rheumatism and gout. It is also treats ulcerative colitis, the nausea related to colic pain, and stomach cramps. Other healing applications include dropsy that is caused by excessive fluid in tissues, bronchitis, fevers, and venereal diseases; it is also used to treat several types of neuroses like personality disorders and extreme anxiety. The preparation requires several steps: freshly dug up bulbs (usually in spring) are cleaned and minced, then soaked in alcohol and repeated to dilute the solution. Colchicum joins other healing plants that can be grown in a garden.

Other interesting facts about colchicum

Colchicum is also known as “naked ladies” because the fall blooms appear on their leafless stalks. The plant does well with low growing evergreens like creeping junipers, near shrubs, and in front of border flowers.  They also like to be near waterlilies, alba, rosy dawn, and dick trotter. It is advisable to fertilize the soil before planting.  Colchicum can be found growing wild in Europe, western Asia, and northern Africa. The plants take up a lot of room during the spring and summer months and can be planted with low ground cover and in rock gardens. If cultivated by seed the corms will bloom from three to five years after sown. They are also good container plants.