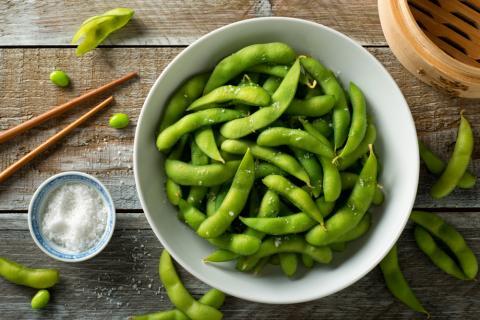 Edamame is a member of the family Fabaceae, commonly known as the Pea family of the genus Glycine Willd or soybean P and contains five species. They are immature soybeans and are usually sold fresh in their pods. These young green soybeans are soft and edible while the pod is not edible; the beans can be used in salads, as a snack, and in many recipes. The earliest recorded reference of edamame was on July 26, 1275, by Japanese Buddhist saint Nichiren Shônin. Though originating in China, edamame was brought to the attention of the world by the Japanese. It was not popular in the United States until the end of the 20th century when Japanese cuisine took its hold in the country. The trend began in June 1991 when Japan Airlines served edamame on their San Francisco to Japan flights. On May 27, 1994, Tak Kimura, also known as Mr. Edamame, first marketed the food in Berkeley, California, and the chain food markets began carrying the product throughout the country.

Edamame are rich in nutrients, containing vitamins C, E, and B-vitamins. They are an excellent source of minerals that include potassium, magnesium, calcium, phosphorus, and manganese. They also contain fiber, isoflavins, and omega-3 fatty acids and contain large amounts of natural plant estrogen known as phytoestrogens. Edamame are one of the few vegetables that are a complete protein.

There are many health benefits contained in edamame. Aside from the other nutrients the beans contain vitamin A and minerals that include iron and zinc. The nutrients contained in edamame keep the skin healthy, boost the immune system, and maintain a strong skeletal system. It is advantageous in lung health and reduces the risk of developing lung diseases. The fiber content is a factor in healthy digestion and prevents digestive tract maladies. Its low calorie count makes edamame an excellent addition to a weight loss diet.

How to Eat Edamame

Edamame are a versatile food. They can be eaten raw, as a snack, steamed, or cooked in a microwave oven. They add a unique texture to many recipes and make an excellent addition to salads. The seeds must be removed from the pods before preparation.  To cook them in the microwave, sprinkle them with water and set on high for one minute or less and to bring out the green color pour ice water over them for a few seconds.

Edamame can be stored fresh in the refrigerator for up to ten days. For long-term storage blanch the beans, and then drain, cool, and dry the beans with a paper towel. Once the beans are cool spread them on a cookie sheet and put in the freezer for about one hour, then place in a freezer bag. The beans will store in the freezer for approximately six months.

Growing edamame in the garden requires a long growing season; they grow much like bush beans, from one to three feet in height and do not need to be staked. They need full sunlight and should be planted in temperature no lower than sixty degrees in rich, compost soil that drains well. The seeds should be planted from one to two inches deep, two to four inches apart in rows that are two feet apart and for a second crop plant another set in approximately ten days. To maintain the plants, thin the seedlings when they are about four inches tall to six inches apart and mulch to keep the soil moist and deter the growth of weeds. Water regularly, especially after budding and the pods begin to grow. When weeding be careful not to disturb the edamame roots. The pods can be harvested when they are two to three inches in length, are bright green and plump. Snap or cut the pods off the stem.