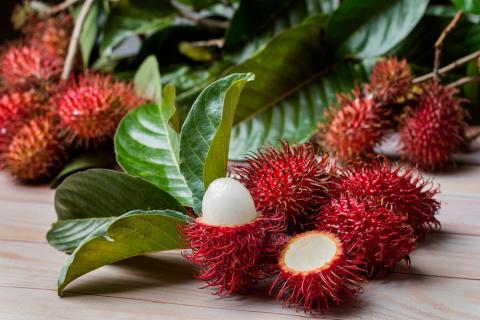 Rambutan is a member of the family Sapindaceae or Soapberry family of the genus Nephelium L. or nephelium P. There are 124 listed species of which four are accepted but are not listed in the United States Department of Agriculture (USDA) classification. The plant is native to Malaysia and is a closely related to the lychee.

The tree is cultivated throughout the islands and southeastern Asia. Traders introduced the plant to Zanzibar and Pemba and some trees were found in India, Surinam, and regions of South and Central America and the Caribbean. In 1912 rambutan was brought to the Philippines from Indonesia. In 1906 seeds from Java were sent to the United States but were unsuccessfully cultivated. Rambutan is a fragile fruit that does not ship well. The fruit is used in many recipes and is considered a medicinal herb and the seeds render oil for candles and soap. The fruit can be purchased at major supermarkets and online.

The rambutan tree matures to a height of fifty to eighty feet; its straight trunk grows to approximately two feet in diameter topped with a spreading crown of evergreen leaves. The leaves are compound growing in an alternative pinnate and are from two-and-three-quarters to twelve inches in length when mature. The immature leaves are hairy, growing from one to four pairs of leaflets and are oblong to elliptical in shape. They have a leathery texture with color ranging from yellow-green to dark green.

The blooms are small without petals and have hairy panicles. The fruit is shaped from oval to elliptical with colors that can be pink-tinged red, bright red, deep red, orange-tinged red, maroon, and dark purple. It grows to approximately one-and-one-third to three-and one-eighth inches in length and has a thin leathery peel covered with tubercles that extend spines. The white to rose tinted flesh is translucent and juicy with a slightly acidic and sweet flavor and contains flat oblong seeds.

The nutrients in rambutan include vitamins thiamin, riboflavin, niacin, pyridoxine, folate, A, and C. It also contains calcium, iron, magnesium, phosphorus, potassium, sodium, and zinc. It is a good source of dietary fiber. Rambutan has been found to be effective in a weight loss diet and its fiber content aids in maintaining a healthy digestive system. Its mineral content strengthens bone mass, reducing the risk of developing osteoporosis and other age-related maladies. The B vitamins are a catalyst in converting carbohydrates into useable energy. The antioxidants contained in the fruit inhibit the development of chronic disease like cancer and cardiovascular diseases. Antioxidants have been proven effective in promoting fertility . Rambutan is used in Chinese medicine to reduce fevers and has been found to have anti-inflammatory properties.

How To Grow Rambutan

Rambutan is a tropical tree that does not tolerate frost: temperatures that fall below fifty degrees Fahrenheit will kill a rambutan tree. The trees are grown in warm regions of Florida and California and do well in greenhouses. They can be grown indoors as a container plant in colder climates.

The plant can be started from seed purchased online or at a nursery; if taken from the fruit they must be fresh—no more than one week old and all the pulp removed. Place seed in a pot with drain holes filled with a mixture of sand, soil, and compost and lightly cover it with soil. The seeds will germinate in ten to twenty days. Fertilize the seedling twice a year and keep the soil moist.

Rambutan trees are male, female, and hermaphroditic and need to be grown in groups to produce fruit. Transplant the seedling two to three yards deep and place them approximately thirty-two feet apart. The tree will begin to bear fruit in four to five years.

Rambutan is usually eaten fresh. It can be served as a dessert, either fresh or stewed. The fruit can be made into syrup and preserves. The seeds can be roasted but not eaten raw, as they may be toxic. Other ways to eat rambutan are as an ingredient in pies, ice cream, and fruit ice; they can also make a refreshing cocktail.