Your Guide To Summer Flowers: Hyacinth 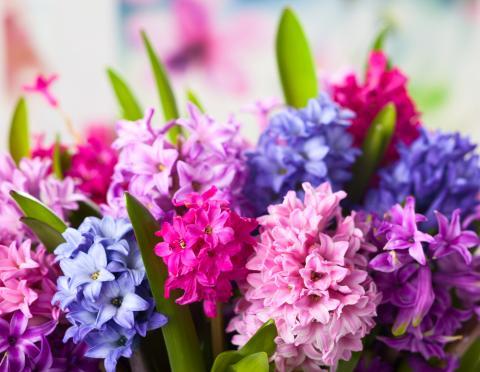 Hyacinth is a member of the family Liliaceae or Lily family of the genus Hyacinthus L. or hyacinth P containing one species Hyacinthus orientalis L. or garden hyacinth P. The plant is native to Asia Minor, which is the Asian region of Turkey, and its nomenclature originated from an ancient language spoken approximately 4,000 years ago known as “Thracopelasgian.”

Hyacinth was first mentioned in Greek writings between the 10th and 8th centuries B.C.E. and the plant was introduced to western Europe in 1554 by a French diplomate Ogier Ghiselin de Busbecq who sent bulbs to botanists in Vienna, Austria.  The curator of the botanical gardens at Leiden Carolus Clusius cultivated the bulb, resulting in the establishment of Holland as the commercial bulb flowering center of the world. During the early 18th century the number of varieties of the plant grew from fifty to 2000 and Madame de Pompadour is credited for making the flower popular.

Hyacinths grow from a bulb on a leafless stem that produces four to six narrow, smooth-edged leaves at the base. The leaves surround the stem and at the tip of the stem is a cluster of fragrant flowers that include colors of white, pink, and blue. The wild species have a crown of fewer flowers and are inflorescent. The plant grows from sea level to approximately 6500 feet in elevation and is a hardy plant that grows from eleven to fifteen inches in height. These wild varieties are rarely white in color and bloom in April and May. Each bloom is about one-tenth to one inch in length and can have a bell, funnel, or urn shape with petals that flare out like a star.

How To Grow Hyacinths Outdoors

To grow hyacinth plants, start from bulbs in colder climates in the fall before the first frost. To start planting, loosen the soil and mix in compost or bone meal. Place each bulb with the tapered end up four inches deep and no less than three inches apart in warmer climates and in colder climates six to eight inches deep.

The plant does well in sunny areas or partial shade in well-draining soil; after the bulb is planted, water thoroughly. It is advisable to wear gloves when handling the bulbs as they contain oxalic acid which can irritate the skin. It is important to keep the soil moist but not wet as soggy soil will rot the bulb. Once the plant is done blooming in late spring cut back the stalk, allowing the leaves to die out naturally so the plant can maintain energy for the following season.

How To Grow Hyacinths Indoors

Hyacinths (https://www.easytogrowbulbs.com/pages/hyacinth-planting-guide) are excellent container plants and do well in most types of potting soil. It is important to use well-draining containers that can be barrels, tubs, pots, and urns. It is advised to plant ten to twelve bulbs in a twelve to fifteen inch container, nine bulbs for a ten inch container, and seven bulbs for an eight inch container.

Place the container in an area that has full sunlight and the bulbs should be planted tapered end up, seven to eight inches deep, and spaced approximately four inches apart; after planting, water to settle the soil. The roots will begin to grow in fall and the plant will flower in Spring. Indoors, the blooms of a small potted hyacinth will scent an entire room.

Once the flowering season is finished, cut back the blooms but not the foliage, as it will feed the plant for the next growing season, and water the plant approximately one inch per week. The leaves will die back naturally in early summer and become dormant—at this time they can be cut back and the plant will rest until the Spring.

Hyacinth should be kept out of the reach of children and pets as calcium oxalate is concentrated primarily in the bulb but is also present in the flowers and foliage of the plant. The bulbs are poisonous to pets, affecting the digestive and respiratory systems. The plant is a colorful addition to a garden and is used in woodland settings or as walkway border plants. To protect hyacinth bulbs from the rodents who enjoy feeding on them it is advised to place a handful of gravel when planting the bulbs or mix the plants with daffodils as they repel rodents.