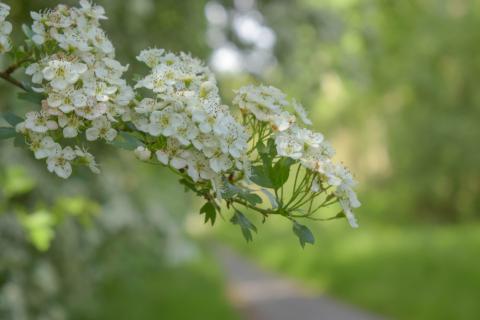 Hawthorn (Crataegus) is rich in magical lore and medicine. The name Hawthorn reflects the berries (haw) and thorns found on this tree. It’s a small tree with big thorns that will remind you if you’re being too greedy harvesting the flowers, and later in the summer, the berries.

This thorny little tree was popular in hedgerows, forming strong natural (and prickly) barrier around pastures and such. The term “hedge witch” comes from the fact that hedgerows in Europe were full of medicinal plants. In Celtic mythology, Hawthorn was more than a fence; rather it was thought to mark the boundary between worlds…specifically the doorway between our realm and that of the fae.  Hawthorns were not to be messed with. To cut down a Hawthorn tree or remove branches unless it was blooming was to risk the wrath of the resident fairies—and we’re not talking about pretty little fairies in glittering pink. The fae in Celtic mythology could take you away, cause accidents, or bring death.

Hawthorn represents the 6th month in the Celtic Tree calendar. It’s also known as Thorn Apple or just Thorn. Another name is the May Tree, as it plays an important part in Beltane and May Day celebrations, when the Sun is directly in between its position at spring equinox and summer solstice. Hawthorn generally blooms in May, though the switch to the Gregorian calender in the 18th century made it so the bloom is closer to mid-May rather than May 1st.  The tree and its copious clusters of white or pink flowers symbolized happiness, fertility, sexuality, and love (it is in the Rose family, after all). Hawthorn also marks the festival of Samhain, another important Celtic festival, as its berries drop in late October. Samhain celebrated the final harvest of the year and the new year. This was a revered tree wherever it grew.

The flowers were used for outdoor decorations, but to bring them inside a home was thought to bring serious misfortune, even illness and death.  This may derive from the chemical trimethylamine, responsible for the distinctive scent of the flowers that also is one of the first smells released from decaying flesh.

Paralleling the reverence for Hawthorn across continents is its use as medicine wherever it grows. Various parts of the plant—leaf, shoots, thorns, flowers, berries—have a long history of use in Native American, European, and Asian traditions.

Hawthorn is most often used for the heart, and you can read more about that here. I take it daily for heart support, for which it’s immensely helpful. The berries are frequently used, but the flowers and young leaves are just as active, if not more so, and the health promoting benefits of Hawthorn extend to the blood vessels as well. As a vascular tonic, Hawthorn reduces inflammation and oxidative stress, key contributors to atherosclerosis.   Hawthorn directly influences the health and function of the endothelial cells lining our blood vessels.

Beyond the cardiovascular system Hawthorn is used for the nervous system, easing anxiety, and helping to counter depression as part of a larger approach for support.

Hawthorn has been studied for reducing the development of cataracts and I like to include it in blends for various aspects of eye health.

Many folks immediately think “Echinacea” as an immune-stimulating plant to take at the start of a respiratory infection, but Hawthorn is also an immune stimulant.  Hawthorn may also help ease allergic asthma, an inflammatory respiratory disorder that’s on the rise.

Metabolic Syndrome and Type 2 Diabetes are growing problems in many parts of the world, and while nutrition and lifestyle adjustments are key for preventing and managing them, plants have a lot to offer for support. Hawthorn has not been the first plant I reach for in supporting clients, but a clinical trial showed Hawthorn reduced blood glucose levels and Hb1AC (an additional way of gauging blood sugar levels). Though this study randomized who got treatment, it lacked a placebo. Despite that, it along with rodent studies have me including Hawthorn in my kit of go-to herbs for metabolic support.

Coming back around to the association of Hawthorn with fertility, studies of human sperm  are demonstrating fertility benefits of the plant that include enhanced testosterone levels, sperm count, and sperm motility.

If you live in one of the temperate parts of the world, chances are that there’s a Hawthorn near you.  Go meet it…simply hanging out with one can be medicine in and of itself!   Just don’t try to chop off any branches…

The leaves used to be eaten by children in the spring and were called “bread and cheese,” though I’ve seen different reasons for this with some sources saying that the name describes the flavor and others saying that the name has nothing to do with the taste of the leaves. The young shoots were also eaten.

The berries are great as jelly, syrup, or wine and contain B vitamins and vitamin C. I like to use the berry syrup in particular for mocktails with sparkling water and a bit of lime.  The tree is an important shelter and food for birds and small mammals.