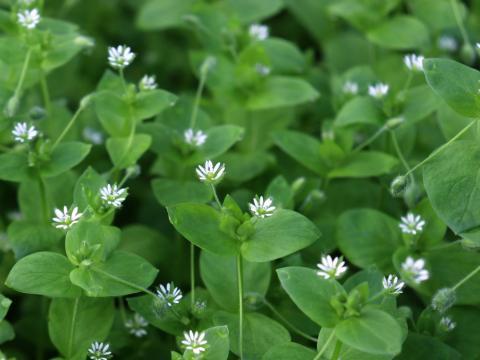 Chickweed (Stellaria media) is an often-overlooked medicinal weed (or, it’s a weed if you don’t live in Europe or Asia).  “Stellaria” refers to flower appearance while “Chickweed” refers to the fact that chickens and other birds like to eat it.

Chickweed has the distinction of being one of the most common weeds in the world and is one of the earliest blooms showing up in spring.  I was thrilled when it showed up in my garden, and, indeed, Chickweed is a common garden and greenhouse “volunteer.”  It also frequents cool, damp soils and is a common inhabitant of meadows, lawns, and disturbed areas.   It’ll even show up in sidewalk cracks if there’s enough moisture.

How To Tell Chickweed From Scarlet Pimpernel

There are 3 easy ways to make sure you’ve got Chickweed rather than its lookalike, Scarlet Pimpernel (Anagalis arvensis). One is flower color: Chickweed has white flowers while Scarlet Pimpernel has orange-to-red flowers. Chickweed is also distinguished by the line of hairs running along the stems, while the stems of Scarlet Pimpernel are smooth and square.  The most entertaining way is to gently pull a stem apart and look for the “rubber band” inside of Chickweed. Why should you care about this?  Well, despite the fact that Scarlet Pimpernel has been used medicinally, it is potentially toxic. It’s probably best not to confuse it with Chickweed and toss it into your smoothie.

The stringy aerial parts of Chickweed are the medicine, and as medicine, dried Chickweed isn’t going to cut it, even though you may see the dried plant sold commercially. Instead, use Chickweed as a fresh plant tincture or tea, or juice the plants and freeze the juice in an ice cube tray. You can store the frozen cubes in a container and thaw as needed.

Some nifty things that Chickweed does is promote fat metabolism and inhibit replication of herpes simplex virus and, to some extent, hepatitis B virus.  In Ireland, Chickweed was part of a concoction called Diancecht’s porridge, an ancient remedy that was used to cure 14 different digestive complaints, along with colds and worm infestations.

Here are some medicinal properties of this handy weed:

Chickweed As An Anti-Inflammatory

Then there are the food uses.  Chickweed is great mixed with other greens in salads and smoothies. It works in pesto, but it’s not aromatic so consider combining it with the more traditional basil.  Chickweed is also used in soups and stews.

So next spring, go outside and look around. There’s a chance you may meet this rangy and useful weed!