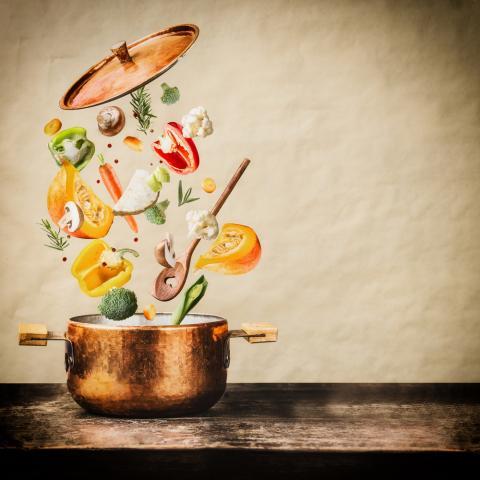 Before I went vegan and gluten-free, I was vegetarian for practically my entire life. So, naturally, I began cooking at a very young age. Honestly, I’ve been cooking for as long as I can remember. It’s gratifying to watch how various flavorful combinations turn into delicious plates of food right before your eyes.

With that being said, I used to find it strange when people would admit that they never step foot in a kitchen, out of cluelessness. For example, my boyfriend, who is a line cook, still asks me how to tell when the water is boiling (talk about irony). Then, I realized that all of the pre-packaged meals, fast food restaurants, and overbearing parents out there make it easy for people to get away with never learning the cooking basics.

However, if you want to take a healthier path to nourishment, kitchen knowledge is absolutely necessary. I hope that these tidbits of invaluable information inspire you to become the fearless, fabulous, flowering home cook you never knew you wanted to, or could, be.

First of all, cooking shows are both educational and entertaining. Give them a try to learn how to correctly cut an onion or dice a jalapeno without obliterating your eyeballs. They’re beyond helpful; I swear by them. My dad and grandma used to “force” me to watch them, and I’ve been willingly watching them ever since.

When following a recipe, which I’d advise all beginners to do, you must read it fully before you begin cooking (like, twice). There’s nothing worse than getting toward the end of a recipe only to find a big surprise that inevitably throws you off and spells out disaster. Oops!

Unless you’re from France, you may not know what mise en place means. It’s a French culinary phrase which basically means "to set up." So, prep all of your recipe ingredients beforehand! Beginner cooks aren’t necessarily known for their speediness; please, don’t trust yourself to be able to julienne (cut into matchsticks) all of those carrots while other dish components are already actively cooking.

Okay, people, there are wet and dry measuring cups for an actual reason. Use the big cup with a pouring spout for liquids, and the ones that come in a set for non-liquids. You can’t level off 1 cup of flour if you used a liquid measuring cup to measure it, can you? All I ask is that you use the correct measuring cup. Accuracy equals yummy food (usually, that is).

Let’s just say salt is super important because it brings out or enhances natural flavors (even in sweets). Remember: you can always add more, but you can never take away too much seasoning. In other words, taste as you go, and adjust seasonings as you see fit. Oh, yeah, always make sure your pasta water tastes like that time you accidentally swallowed about a gallon of seawater at the beach because it’s the only chance you’ll get to flavor the pasta itself.

As you become more comfortable in the kitchen, introduce a little improv. A little of this, a little of that can work in cooking, but you shouldn’t try it in baking; that’s an exact science. You may end up being surprised by your own natural cooking instincts.

Caramelizing food brings out its natural sugars, and makes it so, so irresistibly good. In order to do this, you cannot overcrowd your pans. Use a large enough pan, or cook in batches. Crowded pans result in steamed foods, which just aren’t as drool-worthy as deeply golden, crunchy food bits.

8. Stay In The Kitchen

Every new cook is well aware that foods tend to burn more quickly than we expect them to. Perfectly browned food becomes yucky, burnt charcoal in a flash. So, my last words of advice to you are—do NOT leave the kitchen for even a “second.” You might regret it.