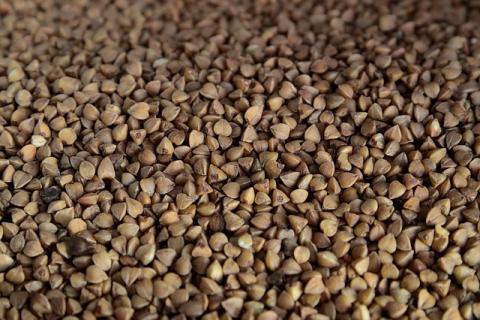 Buckwheat was first cultivated in Japan in approximately 5000 B.C.E. The plant then found its way to China and Siberia in about 1000 B.C.E. It migrated to Europe through Turkey and Russia between the 14th and 15th centuries and arrived in America with the Dutch in the 17th century. The name was derived from the Dutch word “bockweit” which means “beech wheat" as the fruit looked like beechnuts. It is a hardy plant that grows in places that other plants will not grow, and for this reason became a staple for the European peasants who ate it as porridge or pancakes; the most common use was a Russian dish called kasha. Buckwheat is really a fruit and is related to rhubarb and sorrel, but is classified as a grain because of its usage. Two varieties that are popular in the United States are common and tartary. The kernels are about the size of wheat and the outer hull must be removed for it to be edible. Unlike other grains, their triangular shape requires special milling. The buckwheat flower is fragrant, attracting bees and making the honey from these flowers a strong flavor that is darker in color than other honey.

Buckwheat is used in two forms: groats and flour. The groats are the hulled fruit that can be roasted to be included in recipes, sprouted or made into cereal. The flour can be found in dark or light color – the darker color is more nutritious. It is used to make pancakes and combined with wheat flour to make bread. The buckwheat flour should be stored in the refrigerator where it can be kept fresh for several months. The groats must be kept in an airtight container in a cool, dry place and can last for up to a year. Its Ayurveda qualities are heavy and it is astringent, sweet and pungent regarding Rasa; it has a heating Virya and its Vipaka is sweet.  It balances Vata and Kapha doshas, increases Pitta in excess and is slightly Rajasic on the mind. Holistic characteristics class it as a gluten-free food packed with nutrients, antioxidants, insoluble fiber and protein containing all essential amino acids. This makes it a useful tool in treating many diseases.

Buckwheat is rich in nutrients making it a beneficial addition to the diet. Here are five more reasons to get more buckwheat in your life:

1. For cardiovascular health, buckwheat is a major food. It lowers serum cholesterol and low-density lipoprotein cholesterol (LDL) and raises the health-promoting cholesterol (HDL) because of its high antioxidant content. This is due to its rich flavonoids, specifically rutin, which acts as a catalyst for vitamin C in fighting disease. They also maintain healthy blood flow, reducing the risk of clotting platelets. As a good source of magnesium, buckwheat relaxes the blood vessels, which also aids in blood flow and thus lowering blood pressure.

2. Buckwheat is a food to add for the control of Type-2 diabetes. Its nutritional content is effective in lowering blood glucose levels and balancing insulin responses. It is also filling, which means smaller portions can satisfy hunger and therefore aid in weight reduction. The magnesium content in buckwheat also is a factor in reducing the risk of Type-2 diabetes in women.

3. Packed with insoluble fiber, buckwheat is an excellent food to prevent the development of gallstones. It is believed that this fiber speeds up the intestinal transit time and reduces the secretion of bile acids, which lessens the risk of excessive bile acid that helps to form gallstones.

4. Buckwheat is a high protein food – it has more than any other form of grain. It is an excellent source of protein for vegetarians because it contains two amino acids that the human body cannot produce: lysine and arginine. It is beneficial to the body in many ways because it supports growth and muscle syntheses and balances energy.

5. Because it has no gluten content it is an excellent non-allergenic that makes it a good food for those with celiac disease and those sensitive to gluten. It prevents digestive problems like bloating, constipation, diarrhea and leaky gut syndrome.

Buckwheat should be stored in a dry covered container, and when purchasing it in bulk be sure to check the bins; they should be clean, dry and covered. It can be found pre-packaged or in bulk at most health food stores and it is always advisable to purchase organic buckwheat groats or flour.