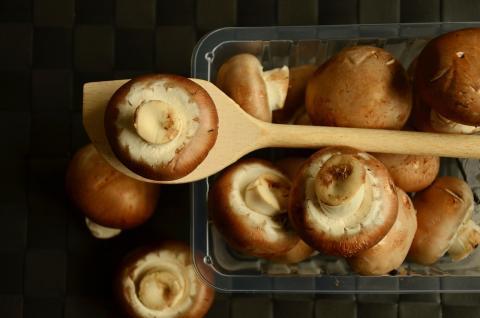 Mushrooms have been eaten as food and used as a healing aid since pre-history starting in the Neolithic period. They were first found in in the prehistoric lake dwellings in Austria, Germany, and Switzerland. Truffles were found in Greece and Rome where they cultivated the small Agrocybe aegerita on pieces of poplar trunks. In China and Japan they’ve grown shitake mushrooms on rotting logs. In 1678, a French botanist demonstrated the cultivation of mushrooms by transplanting their mycelia. While mushrooms enjoyed a long history in Europe and Asia, they did not become popular as a fad food in America until the late 19th century, though they were used in recipes for making condiments and sauces up until then. The advancement in cultivating and identifying mushrooms was the catalyst for the growing interest just before the turn of the century. Mycological clubs began forming and members would forage and identify the mushrooms in their area.

Mushrooms are a member of the Fungi Kingdom in the Eumycota division, which means true fungi, with many sub-classifications. Of this division there are many groups depending on the structure of their fruiting bodies and the various macro and microscopic characteristics. The mushroom is actually the reproductive organ of the fungi, which grows underground by a network of tiny threads known as “Hyphae.” Mushroom spores are minute pieces of dust that float on the air current to join and create more fungi. There are approximately 140,000 species of mushrooms and only 100 are being studied by scientists for their health benefits.

Edible mushrooms contain an abundance of nutrients that include B vitamins which consist of riboflavin and niacin and provide energy by breaking down proteins, fats, and carbohydrates. Also present in mushrooms is pantothenic acid that is important to the nervous system and maintains hormone balance. The presence of riboflavin maintains healthy red blood cells and niacin also promotes a healthy nervous system, healthy skin, and properly functioning digestive system. Mushrooms also contain minerals that include selenium and ergothioneine that are antioxidants. Copper, which produces red blood cells and maintains a healthy skeletal and nervous system, is also present in mushrooms. Add to the list potassium that balances the body fluids and minerals, which regulates blood pressure; this mineral is essential in a healthy muscular system which includes the heart. Mushrooms contain beta-glucans, a substance that stimulates the immune system.