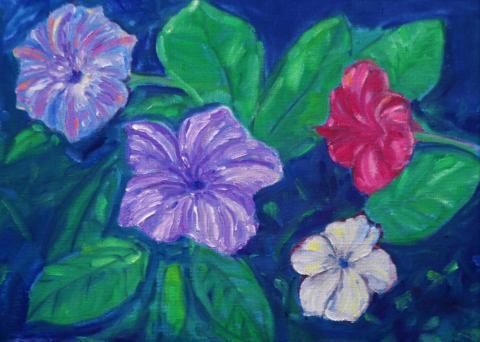 Four o’clocks are of the genus Mirabilis L., species Mirabilis jalapa L. and are also known as Marvel of Peru, where it originated. The Spaniards discovered the plant in the Peruvian Andes in 1540 and exported it to Europe where it became a popular decorative addition in gardens throughout the continent. In warmer climates the four o’clock is a perennial but in cooler climates it is an annual. It is also used for medicinal purposes and because it is edible has several practical uses. It is easily grown and maintained as a late summer flower with many decorative applications because of the variety of colorful blooms on one plant. The name was derived because the flowers open in late afternoon. It is a hardy plant that is disease resistant and tolerates a variety of soils. When planning a garden, one might place four o’clocks with morning glories and moonflowers, giving the garden color throughout the day and the night.

Descriptions and Characteristics of Four O’Clocks

The four o’clock plant grows much like a shrub with multiple branches that produce fragrant flowers for the entire summer in cooler climates. The plant can grow from two to three feet tall and approximately the same width with pointed, opposing leaves. The blooms can cluster or grow as individual flowers that are trumpet-shaped with colors that include white, yellow, pink, magenta and bicolor. The blooms are approximately two inches long and one inch wide.

Four o’clocks can be planted in beds, as a border, or in pastures. In colder climates they must be planted after the last frost, in areas that get full sun. To plant in beds or borders put seeds in the ground at a depth of one-quarter inch and one inch apart, and when the seedlings sprout to one inch thin to one to two feet apart. Germination will take from five to ten days. For pasture seeding prepare the soil by removing weeds and cultivating the soil to loosen it, and then spread the seeds evenly over the prepared soil (roller press them into the soil for quicker germination). Keep the soil moist until the seedlings are well established. The plant is fairly drought tolerant and requires well-draining soil; however, they do not do well in wet soil. They thrive in soil that is below neutral pH to slightly alkaline. It is advised to fertilize the plants with compost once or twice a month to encourage a healthy growth. Before the first frost remove the tuber and store them during the winter in damp peat or sand to plant in the spring.

Four o’clocks bloom in late afternoon and stay open throughout the night. Be cautious of planting them near other fragrant flowers, as they have scented blooms. However, they do look nice near morning glories and moonflowers; as the morning glories close the four o’clocks open and as dusk turns to night the moonflowers open, giving the garden twenty-four hours of flowering plants. Four o’clocks can line a walkway, decorate a patio, and make a nice addition to the garden. They repel insects -- especially mosquitos -- which makes them an excellent patio plant.

Healing Benefits and Other Uses of Four O’Clocks

Four o’clocks have purgative properties and can be used for treating wounds, while the leaves decrease inflammation. To treat acne, the dried flowers are made into a powder and applied to the face. The plant contains betaxanthis, fatty acids and oil acid, which make it an excellent diuretic and blood cleaner. It is effective for the relief of tonsillitis, sore throats, kidney stones, gall stones and it is an excellent treatment for diabetes. It also contains cancer preventative properties and is rich in flavonoids, triterpenes, proteins, steroids, and alkaloids. Four o’clocks can be used as an edible food coloring for frostings and jams. The leaves can be included in recipes as long as they are cooked.

Native to Peru, four o’clocks are a warm climate plant that does well in cold climate summers. It has fragrant blooms that open in the late afternoon and stay open all night. They grow in small shrub formation, making them an excellent border plant or patio accent – especially since they repel mosquitos. They have many healing benefits and are an edible plant to use in baking and a subtle addition to recipes. These night blooming flowers add a creative touch to any garden.