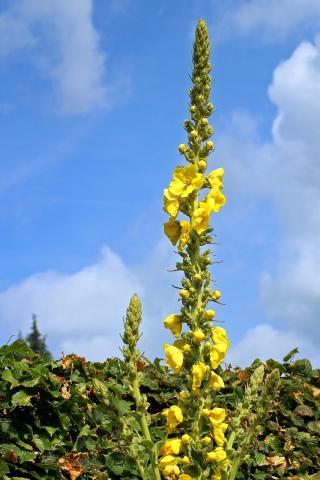 Mullein (Verbascum thapsus) is on my mind today after wildcrafting the root and leaf on a chilly, rainy morning this week. Despite the mud, wet days are great for root digging; it’s easier to unearth them.  And, as mullein is considered a noxious weed in many places, no one will likely protest should you dig it up!  Though disrespected as a lowly weed, mullein is a beautiful and immensely useful plant.

“Hags Taper” is another of mullein’s common names. Witches were thought to burn it as a torch during spell work. However, Ulysses in Greek mythology used it to protect himself from the witch, Circe, and it has traditionally been used in Europe and Asia as a protective plant (2). Accordingly, I keep a mullein flower spike in my home. Can’t hurt and it’s pretty!

When dry, mullein burns readily, and this was augmented by dipping it into melted animal fat.  Hence, the other common names: “Candlewick Plant,” “Our Lady’s Candle,” and “Candelaria” (1).  These names may also reflect the fact that when in bloom, mullein resembles a candle with its tall, thin flower spike topped with profuse, bright yellow flowers (1). Some folks call it “Toilet Paper of the Woods,” because of its big, soft leaves, though I don’t recommend that use. The profuse hairs covering the leaves can cause irritation in places you don’t really want them.

One of the best known medicinal uses for mullein is for earaches. A flower-infused oil is dripped directly into the ear canal and is often combined with garlic-infused oil for infection. The flowers are also helpful for cold and flu, especially if spastic coughing is a problem (3). I’ve not tried them for this; instead, I use the leaf, simply because the leaves are less tedious to harvest.  Mullein isn’t strong enough to use as a standalone herb for respiratory infection but its soothing, relaxing, and mildly expectorant effects combine well with stronger anti-microbial herbs. Mullein leaves are usually used as a well-strained tea for colds and flu, but a tincture also works. Mullein leaves are used for chronic lung problems like asthma, emphysema, and chronic bronchitis. I also like it for respiratory tract dryness and irritation.

Mullein was traditionally smoked for lung issues, though smoking anything will result in particulates in the lungs.  That said, I enjoy herbal smoking blends, and mullein is a good addition…might as well include a lung tonic!  For clients trying to quit cigarettes, I ask them to buy good quality tobacco and start rolling their own.  One, because these will be less toxic than commercial cigarettes.  Two, so that they can start adding in mullein and other more beneficial smoking herbs, gradually replacing the tobacco over time. Though this technique doesn’t work for everyone, it may help those who’ve been unable to quit cigarettes “cold turkey.”

The root is the part of mullein I use most frequently.  In Traditional Chinese Medicine the root is used similarly to the leaf for respiratory support. However, some of us herbalists use it for spinal alignment issues that result in pain. I take it daily for low back pain and sciatica and it works well unless I try to pick up a couch or something else too big for me to be dragging around. Without mullein root, my low back "goes out" frequently, despite physical therapies. While different herbalists have ideas on how mullein root helps with spinal alignment, it really isn’t clear exactly how it’s acting (which, by the way, is true for many pharmaceutical drugs). Some herbalists use mullein leaf for these same spine-related issues, but the leaf hasn’t done it for me.

Mullein root also helps with urinary incontinence.  It appears to strengthen the trigone muscle that controls the passage of urine. It’s worked really well for a client who would wake up at night with urinary urgency but couldn’t make it to the bathroom in time due to painful, arthritic feet.  Mullein root has significantly improved the situation.

So there you have it. A few of the many uses of a useful and beautiful “weed.”  If you live somewhere in a temperate climate, chances are there is some mullein waiting not too far away!