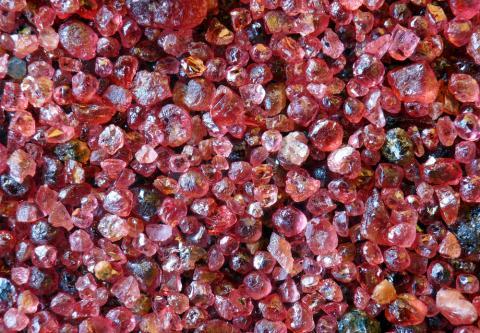 Red as blood, red as molten lava, as the fires of life dancing in the embers. Dark as night, as the cave of wonders, as the unknown depths of a person’s soul before discovering the gifts awaiting them. Red garnet is a dark red stone whose vibration and color helps us to tune into the richness of our capacity to live by aligning us with the fires of kundalini awakening in our root.

Imagine the remembrance of all the potency and creative power of the universe stored in a single stone. Now imagine that once this stone is placed in our hands, it ignites the Source of that universal energy within us—at the level we are prepared to begin embodiment. This is the gift of garnet.

Just take a look at this lusciously delicious colored stone. Its black-red hue is sexy and screams of rooty power. By holding garnet near and choosing to work with it, one feels his or her life force energy instantly activated and beginning to pulse to a higher degree than before. Garnet signals all of the chakras to begin to cleanse, as the knowing exists of their need to be open once Kundalini begins her ascent.

I had no idea what I was in for when I placed a dark red garnet atop a staff I intended to carry all the way to Ireland on a long-awaited reunion mission. What I thought might be a rekindling of an old flame turned out to be a raw, passionate revival of my own inner connection to life itself. Garnet led me confidently into the path of my own destruction—the destruction of old emotions and thought forms which held me back—and into the arms of myself as the Beloved. I felt the strength of garnet lead me forward where others warned me not to go. I went anyway. I held garnet up as my guide and breathed with its pulsating vibrant hue all the way across the states, across the Atlantic Ocean, and into a foreign land. It wasn’t long before garnet set me down in a maze of my own discovering, and with this stone as my ally, I truly discovered a huge access point to my own life force which had long been left forgotten and shut down.

Kundalini is the name given to the life force of the universe as found in our bodies. Before awakening to a fuller realization of who we are on this plane of existence—as divine beings embodied—our kundalini is said to “slumber.” But once she stirs—for she is Shakti, the energy of the Divine Mother of Creation within us—she begins to rise, and with her so, too, does our consciousness rise up.

An unawakened person exists with only a sliver of consciousness, acting mostly from a programmed or patterned behavior learned through childhood and society. However, once kundalini awakens, as garnet assists to occur, one’s consciousness begins to reach beyond social programming and ancestral beliefs, to find the Source by which they are created. This is the process of self-realization for which garnet is a trusted companion.

Garnet works with our core instinctual nature, which is raw passion. When unawakened, this instinctual nature can mirror that of the animal kingdom in its expression, but when worked with consciously it has the capacity to propel us into a richer experience of life and our bodies. Passion is holy; it is the divine impetus within us to couple and relate intimately with another person; it is the fires which ignite creativity and personal expression. Passion is that which feeds the life force so that we may rise up and live wholeheartedly unabashed and with purpose.

When working with garnet we find an ability to balance our primal instinctual nature with our higher mind and blend passion with insight so as to find our reason for embodiment to be fulfilling. Garnet assists us in embracing that which might be seen as taboo, as part of nature and part of raw living. It strengthens our connection to survival instincts and to pure sexuality as we have the capacity to feel and experience in these bodies…but it does more than this.

Due to a high resonance with life force energy itself and a focused ability to work with the root and heart chakras specifically, garnet not only activates pure instinctual fires, but also connects us to a deep capacity to love, trust, and experience devotion. This is a rare and beautiful combination of energies. It is this particular blending of possibilities that this world is most in need of at this time. It is so easy to find one who is connected to their root, but not their heart, or immersed deeply in the heart, but disconnected from the root—but to blend root passion and heart devotion is most powerful and transformative, as the kundalini shakti herself.

Though garnet is a fiery stone and able to stimulate passion, interestingly enough, it has the vibration of peace as well and is able to ward off angry emotions, or at least help one to deal with these burning feelings in a most productive way. Often known as a commitment stone, it is easy to see why, with all of these properties, one might associate garnet with commitment—as it supports well-rounded relationship qualities.

Working with garnet gives one the ability to experience recollection of past lives and release any negative patterns brought forward from previous times and also assist in integrating the positive life lessons and wisdoms accumulated through other embodiments. Garnet also works directly with the DNA to release unhealthy patterns and restructure in alignment with health and wellbeing.

Physically, garnet is literally a gem to carry around for health and strength as it boosts immune functions, helps to purify the blood consistently, and offers metabolic balance and wellbeing. Garnet works all the way down to the bones to bring strength and purification and is stupendous to turn to for issues of the spine—as can be understood by its direct correlation with kundalini energy—which functions in the spinal cord.

Garnet is a great detoxifier of the physical and emotional bodies, which is right in alignment with what our own kundalini life force energy does to us and for us. By working with garnet, we are brought into more pure alignment with our body’s own capacity for healing and awakening. Garnet is a rejuvenating crystal, assisting the body in top performance and optimum health.

How to Work with Garnet

There are countless ways to work with crystals and often all that is necessary is tuning into one’s own intuition and trusting the impulses of how a stone wishes to be attuned to, but here are a few of my favorite ways to use garnet:

Sit with a chunk of garnet at the base of your spine while practicing spinal breathing. The stone helps to stimulate kundalini energy and helps to propel it up your spine, clearing out blocks and stagnant energies along the way.

Drop a garnet stone into a glass of spring water and let it sit in the window sill to charge your water for about 30 minutes to an hour (or more). Drink the water (not the stone) for a burst of energy, a passionate burst, and immune boost.

Bathe with garnet stones in and around the water in order to activate your life passion and visualize all your blocks running out with the water down the drain.

Lay down with garnet stones on any of your chakras or areas of the body which you feel need movement or purification.

Keep a garnet stone in the relationship corner of your room or altar (far right-hand corner from entrance) in order to bring more passion, romance, love, and honesty in to your relationship or to draw in a clear, honest, heart-felt union.

By working with garnet your entire life can transform in ways you never realized you needed but which can connect you more fully to the core of your being and the life force energy of kundalini which lives in us all.