Should You Practice Yoga On Moon Days? 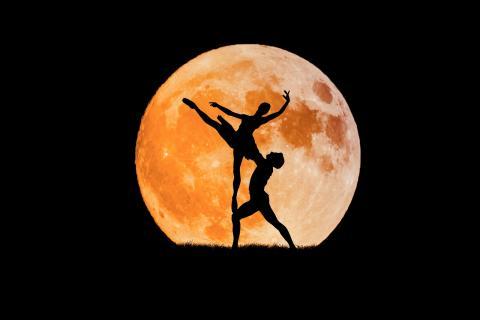 The full moon—dogs howl at it; crime rates increase when it’s out; and, according to legend, the Buddha was born, became enlightened, and entered Nirvana all on days it governed. Observers of the sky have used the moon’s shapeshifting quality for centuries to chart the months and plant and harvest their crops, and cultures across the globe grant particular significance to the new and full moons.

Days and nights in which these moon stages occur are auspicious in some societies and inauspicious in others. In the Ashtanga yoga tradition, practitioners often take the day off from asana (posture) practice during full and new moons. Why? Is the ritual motivated by superstition, tradition, health concerns, or a little of all three?

In the Words of Pattabhi Jois

First, let’s define terms. A moon is new when it’s located between the earth and sun and is invisible or near-invisible to the naked eye. A moon is full when the earth is between the moon and sun. The sun illuminates the moon’s face so that it appears perfectly round. Each usually occurs once a month, although longer months may see two of one stage or the other.

To understand why moon days are vacation days in the practice of Ashtanga, it would seem logical to go straight to the source. At a talk given in France in 1991, Jois said of full and new moon days:

“That day is very difficult day. Two stars one place is going. New moon also, full moon also. That day very dangerous day. You (take) practice (on that day), anyone can have a small pain starting. That pain is not going very quickly. Long time he is taking. Some broken possible. That is why that day don’t do.”

Although Jois clearly believed in the dangers of practicing on moon days, his limited English left his words open to interpretation. Many of his most prominent students have consequently taken on the role of translator.

Unsurprisingly, Jois’s English-speaking students, who studied with him at various points from the early 70s to 2009, have different interpretations of Jois’ moon-day dictum. Often, they have based these interpretations on their private conversations with Jois, or Guruji, as he is fondly known, and on their personal explorations into yogic texts and Indian culture.

Guruji’s grandson, R. Sharath Jois, currently serves as director of the K. Pattabhi Jois Ashtanga Yoga Institute in Mysore, India. In 2015, he told a group in Mysore that the position of the moon affects our minds, as do other heavenly bodies. He noted that the mind is especially active during moon days, and this can lead to both physical and mental injury if one doesn’t take the day off from asana practice. “Just rest,” he told the group and referenced the Indian tradition of not traveling on moon days.

Master teacher Richard Freeman concurs, saying the tradition is “partly due to the Indian astrological belief that it is not auspicious to do certain things on moon days.” He also notes that when you practice asana six days a week, as is recommended in the Ashtanga community, a day off every two weeks can feel luxurious. Elsewhere, he notes, “Observing this restraint to practice can be helpful in not becoming too attached to practice and routine.”

Tim Miller, who runs the Ashtanga Yoga Center in Carlsbad, California, states on the center’s website that the “watery nature” of human beings makes moon day vacations advisable. Presumably, similar to the way the moon’s gravitational pull affects the ocean’s tides, it also influences the water that accounts for 55-78% of the human body. (Western scientists haven’t found an observable effect of the moon on the human body or behavior, and chalk up reports of increased lunacy, violence, and dog bites on full-moon days to confirmation bias.)

Longtime Jois student and Namarupa editor Eddie Stern points out that Pattabhi Jois taught at Mysore’s Sanskrit College, which was closed for moon days and the days directly before and after. The teachers at the Sanskrit College were Brahmins and had to perform certain rituals on these days, leaving them no time for teaching. Stern suggests that taking a break from teaching duties and practice on moon days “became a habit of observance for [Jois],” in addition to Jois’ belief that students were more likely to get injured on moon days.

Ultimately, many Ashtanga practitioners choose to observe moon days both as a sign of respect for the tradition and as a necessary reprieve for the body. Whether or not we believe it is injurious to practice on these days, Stern suggests we “accept that if [Jois] felt [certain rituals] important enough to follow…they are applicable to us too.”

Giving your body some well-deserved rest on moon days also offers the opportunity to connect with the natural world. As Tim Miller says, “Practicing Ashtanga yoga over time makes us more attuned to natural cycles. Observing moon days is one way to recognize and honor the rhythms of nature so we can live in greater harmony with it.”

Ashtanga moon days don’t always correspond to the days of the full and new moon marked on a Western lunar calendar. One reason is that the moon isn’t really full or new for an entire day. Rather, it peaks in fullness or “newness” at a particular moment. If the moon stops waxing at 12:30 am on a Saturday, Western lunar calendars consider Saturday the day of the full moon. According to the Jois Yoga website, the system of Indian astrology considers the period before the moon peaks as full or new the true moon day. Therefore, moon days on an Indian astrological calendar are often one day ahead of moon days marked on a Western lunar calendar.

Use the moon calendar below (via Ashtanga Yoga Center) if you’d like to follow the tradition of taking a vacation from practice on moon days. Many Ashtanga studios close on moon days. If closed, they typically follow the astrological lunar calendar, but if you’re not sure, ask your teacher or check the studio’s website.

*Some studios will observe this moon day on Sunday, August 26th