Pedicularis: An Herbal Hug For Your Heart 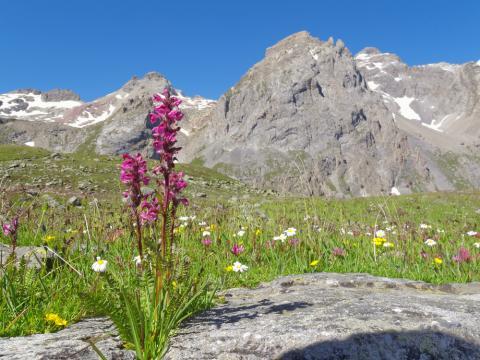 Pedicu-what???   This plant is a bit off the beaten path for many folks.  The name “Pedicularis” is from Latin, meaning “lice.”  Yum.  Commonly known as Lousewort, the plant was thought to cause a lice infestation if ingested. But, not to worry!  I’ve been using it for years and so far no lice.

Pedicularis species are hemi-parasitic plants found at higher elevations in North America, Asia, and Europe.  Hemi-parasitic plants can take up nutrients and water from the soil and generate their own food via photosynthesis, but they also plug into neighboring plants to pilfer additional nutrients. Here in the Southern Rockies, we have at least six species, ranging from the appx. 8 inch tall Elephant’s Head (Pedicularis groenlandica) to Towering Lousewort (Pedicularis procera), reaching up to 5 feet tall.  I use them all more-or-less interchangeably.

I love this plant (though its neighboring plants may not).  Not only are the different Pedicularis plants lovely to look at, they’re a sign of a healthy ecosystem.  And, they’re good medicine. The first time I used Pedicularis as such was after a minor motorcycle crash that left my ribs hurting and my nervous system frazzled. My teacher, Pam, suggested I try some Elephant’s Head before we headed off on an herb walk. Wow…within about 15 minutes, my ribs felt better and I was relaxed. These are the uses I was taught: sedating and also muscle relaxing and anti-inflammatory for musculoskeletal pain. Though, Pedicularis species are used worldwide for much more than this.

Along these lines, I had never thought of Pedicularis for the heart until getting unexpectedly dumped a couple years ago.  I didn’t handle it well (does anyone?) and couldn’t sleep. On the third night, I tried some Pedicularis extract to help me sleep. It was a mix of 2 or 3 species.  It helped immensely, and not simply as a sedative…It soothed my heart. I didn’t expect this. It felt like a warm blanket around my heart. The heartbreak didn’t magically go away but it became a bit more tolerable.  I mentioned this heart-soothing effect at an herb conference and the immensely insightful herbalist Dara Seville mentioned that maybe the muscle relaxing effect of this plant includes the heart.  The heart is, after all, a muscle.

I’ve since learned that Pedicularis species have been used in Chinese Medicine as a heart tonic, physiologically speaking. And, as with better known heart tonics such as Hawthorn and Motherwort, Pedicularis seems to support both the physical and emotional heart. Now, when my heart’s aching due to loneliness, past wounds, or whatever, I turn to Pedicularis. My favorite way to use it is to smoke it. (It’s a popular smoking herb.)  A bit of Damiana (Turnera diffusa or Turnera aphrodisiaca) can be added as a pick-me-up to complement the relaxing effects.  You don’t need much of this blend. A couple puffs should do it.

How To Use Pedicularis

So there it is…Pedicularis is a heart herb.  If your heart needs a hug and you’re considering Pedicularis, start with a low dose. A few drops of a liquid extract, for example.  The nervous system effects can be more pronounced in some people. A friend got his butt kicked by a dose that’s mildly sedating for me.

Various Pedicularis species are available online, but make sure you’re using a reputable source. Being hemi-parasitic means that Pedicularis can pick up toxic compounds from poisonous neighboring plants, so you want to know that whoever is gathering it knows what they’re doing. This may also work in the other direction…Pedicularis that’s tapped into Willow or Oak, for example, is even better medicine!