Your Guide To Summer Flowers: Periwinkle 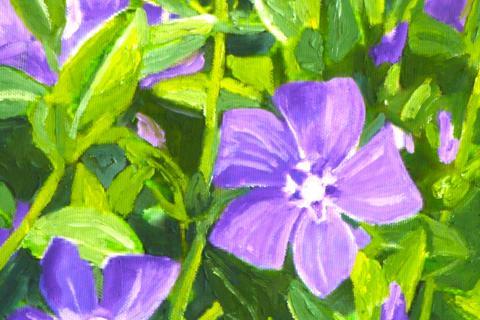 Five species of the plant are native to Asia and Europe and are claimed by Great Britain. Three species are native to the East Indies, Madagascar, and America. The species name is derived from the Greek language which means “to bind” because of their vining quality. Periwinkle is a perennial plant and is commonly used as a bedding plant as it rapidly spreads along the ground forming a low green layer that does not need to be mowed or pruned.

How does periwinkle look?

The periwinkle keeps its glossy leaves year around. The cultivated plant has leaves that contain streaks of light green on their characteristic rich, dark green color. They grow in pairs from the stem with the Greater Periwinkle having a large egg-shape with tiny fringed margins. The Lesser Periwinkle has much smaller leaves that do not have fringed margins and are shaped much like a myrtle leaf.

The flower blooms in white, blue, and a deep blue-purple; the petals are based by a calyx with five deeply cleft and narrow divisions. The corolla is made up of petals that have a tubular base that grows into a broad, flat disk made up of five broad lobes; they twist when in bud and though the petals are irregular the entire corolla appears symmetrical.

Periwinkle As A Medicinal Herb

In Latin genus Vinca is defined as "to overcome." This is quite appropriate because the periwinkle has a long list of disease cures. It has been used for curing several cancers like leukemia, Kaposi's sarcoma, malignant lymphomas, and Hodgkin's disease. Containing vincamine or vinpocetine or both it is used in the treatment of Alzheimer’s disease, improves hearing loss in the elderly, and reduces calcium buildup resulting from dialysis. It is effective in lowering high blood pressure and may help reduce the incidents of headaches, vertigo, diarrhea, bleeding gums, tinnitus, and heavy menstruation. As an astringent, the tannins in the plant relieve the pain produced by canker sores.

Lesser periwinkles are also known as creeping myrtle and though they prefer rich, moist soil they will prosper under most conditions like drought, alkaline, and clay soils. It is best to plant them from a potted plant or cutting. Just a few plants will do the trick and should be planted twelve to eighteen inches apart and soak the ground after planting; keep the soil moist for the first six to ten weeks until the roots have become established. Major periwinkle is a larger plant with bigger leaves and is a less hardy plant than the minor species. It is commonly found in the colder climates. The minor periwinkle is a very invasive plant and its runners need to be pruned to keep them from taking over an area.

In Italy the periwinkle is known as Centocchio, Hundred Eyes, or The Flower of Death because of the ancient burial service for dead children. In France it symbolizes friendship, derived from a Rousseau incident. The Germans call it the Flower of Immortality. Their colors also have meaning: white blossoms symbolize memories and love while light blue flowers represent purity and strength. Other meanings include memories shared between friends and relatives and reaching goals and achieving dreams.

The periwinkle is a member of the Dogbane family that includes several species and many varieties. They are native to Europe, Asia, the East Indies, Africa, and the Americas depending on the species and Great Britain claims the European species.  The plant has been a valuable healing herb for millennia treating lower digestive tract diseases, bleeding, and vertigo. Today it is used in treating cancers and mental diseases. It is a popular garden plant used as ground cover.