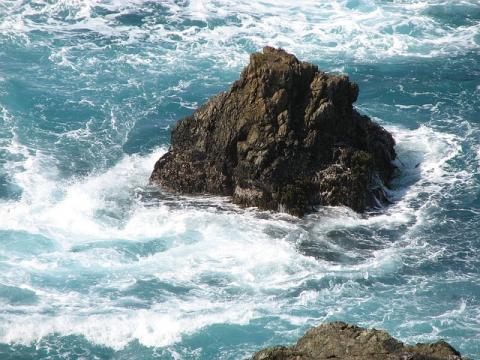 I was given a piece of Aquamarine when I went to visit the great Seer and Mystic Almine, at her home near the ocean in Newport, Oregon. I felt so deeply drawn through my studies of her material that I should go to where she was and see what transformations could be had in her presence. I have truly never met a more generous, loving individual in all of my life. When I departed, besides the many other gifts bestowed on me during my stay, she gave me a gorgeous piece of Aquamarine which reflected the depth of my visit there.

Pisces is the 12th zodiac sign and representative of “what lies in the great depths.” You could say that Pisces, as a water sign, is ruler of the sea and all things “beneath the surface,” including the depths of the subconscious mind, deep imaginings and those things as yet undiscovered. Aquamarine is an excellent stone for tuning into the depths so easily accessed by a Pisces and Sapphire has long has been known for its ability to help tune one into psychic abilities and prophecy. Together, Aquamarine and Sapphire make excellent birthstones for the Pisces person or for those wishing to attune to such qualities in themselves.

As the sun makes its way back into the zodiac of Pisces, many of us are drawn into considering aspects of ourselves that are less obvious. Perhaps it is just the natural impulse of the world just before spring bursts through and brings a new fire and energy to the scene. Pisces is the sign of deepness, uncovering and dreaming. Using stones which help to attune one to these is helpful for all people, and especially if you have Pisces heavily weighed in your chart.

Aquamarine – water of the sea

Aquamarine was named for its color, akin to the blue waters of the sea and its ability to assist one in accessing the watery nature of the emotions and abilities often hiding “beneath the surface” of reality. Even the name Aquamarine itself is Latin for “waters of the sea.” Many say that the watery blue of the stone acts much like a mirror into consciousness, reflecting out to the surface that which has been hidden, ready to be revealed. The Pisces nature is much this way, though they can often feel all too comfortable swimming quietly in the sea of their own imagination. Aquamarine can help bring the more silent Pisces into a space of self-expression and allow more comfort in sharing the depths of their soul.

Aquamarine is a light blue variety of the Beryl stone, which is the family of stones most known for the Emerald. It is interesting to note that Pisces sports both a Beryl and a Sapphire as birthstones, two of the most precious stones there are, lending much credence to the idea that more value ought to be placed on the “unknown” than we perhaps currently do - a deed that Pisces could be made famous for.

Also during my studies of inner alchemy with Almine, we were shown a way to create our own Seer Stone, allowing us to discern for ourselves what was needed in our lives with greatest precision, and to “see” what path we needed to take. I was familiar with the idea of a Seer Stone from growing up Mormon, as the original founder, Joseph Smith, Jr., was said to have used a Seer Stone to translate the Book of Mormon. I was intrigued, as the process of creating a Seer Stone required the acquisition of a Blue Sapphire – which has the exact vibration for allowing the gift of prophecy, seership and translation.

The dark blue Sapphire is the other famed Piscean stone. Often termed “the gemstone of gemstones” the Sapphire is the epitome of crystal magic and can assist anyone who wishes to attune to the power of the subconscious, the vast unknown of the universe, or the mysteriousness of their own nature.

If one wishes to tune into “unknown” states of consciousness, as in meditation, Sapphire is a great assistant for this as it helps to both calm the mind and open the higher centers for spiritual attunement. The Pisces nature is built for diving deep, but they sometimes have a tendency to “lose” themselves in the process. Sapphire and Aquamarine both support clarity and a refinement of consciousness when interfacing with the vast unknown.

Psychic abilities are supported and developed with use of both Aquamarine and Blue Sapphire. The Pisces, by nature, seems to be all too familiar with the “sixth sense” though they are often oblivious to the fact that it is anything out of the ordinary. With the help of Blue Sapphire, a Pisces personality can be assisted into verbalizing – in a cohesive and comprehensible manner – that which they are so familiar with accessing on a regular, though often “behind the scenes,” basis. On the flip side, someone who would like to become more adept with psychic skills would do well to utilize either Aquamarine or Blue Sapphire, which can help them to refine these subtle gifts and give them voice.

Being a sign of the subconscious mind, Pisces is often known for “swimming in the past” or envisioning the future. Working with Aquamarine and Sapphire is perfect for bringing those thoughts, feelings and beliefs, which have been blocking authentic expression or growth, from the subconscious to the forefront for healing. These stones can help these subconscious patterns “wash to shore” so to speak, where they become conscious and able to be worked through and either released or “rewritten” more to the benefit of the person.

As the sun moves into Pisces, we could all benefit from a little assistance in working with and integrating the power of what these energies hold for us. We could be in for a ride with the greater collective unconscious “washing to shore” and might do well to call on the power of these precious stones to help us “navigate the waters” and find clarity and calm expression through the storms that may pass our way.

On the same wave, in our individual lives, when we find the waters a little rocky, reaching for Aquamarine or Sapphire can help us to ride the waves and see through the choppy patches with greater ease and more understanding.

It has been thought that Aquamarine came from Atlantian times and was used by priestesses and priests in discerning information coming in from Cosmic sources. It was often worn over the third eye center as a refining tool and to enhance intuition and to assist in receiving guidance and inspiration. It was also a symbol of the priesthood and signified the depth of understanding and initiation one had undergone.

Sapphire has also been known as a power stone, as mentioned previously, thought to be the original “Seer Stone” also used in many instances as the stone which helped the Seer or Shaman to “see between worlds” and discern information. It is very much reflective of the stars in the heaven and has even been thought to have arrived by passage of those from other realms, so deeply star-way is its glory and brilliance.

In Healing the Physical

Both of these stones also carry incredible healing properties for the physical body, often associated with the mind, the brain, senses and the idea of integration. Blue Sapphire is often used for insomnia, headaches, memory and mental sharpening such as is desired by writers and other professionals who depend on their minds greatly.

Eyesight is supported by Blue Sapphire as is hearing and issues with the ears and eyes. The nose is also assisted by this blue stone, both in refining the sense of smell and with problems of the nose and sinuses. This stone seems to help sharpen all of the senses and make them more “acute” and refined.

Aquamarine specifically is wonderful at aligning all aspects of the body's immune system and especially the glandular system, which regulates all the other systems of the body. It is also implicated in all issues regarding the throat -- not only the throat chakra and the glands of the throat, but also the voice and the vocal chords, esophagus and reaching down into the thymus gland and high heart. This stone not only helps one to live their personal truth, but to allow the body to align with such physically by keeping the health of the body in check.

The Pisces person is often very attuned to the mind and psychic plane, but may find it difficult to connect to the physical. Aquamarine and Blue Sapphire help one who is steeped in the ethereal planes to connect into the body and maintain balance. Often called “the Stone of Courage and Protection,” Aquamarine assists one in having the courage to embody fully and feel protected in their body and being enough to express their personal truth.

One of my favorite tidbits about Blue Sapphire is that it has often been used as a partnership stone, as it helps to strengthen commitment and fidelity. It has been called the “stone of love” and has been a recommended and often chosen wedding stone across the globe, especially in more pagan cultures. Sapphire helps one to live in integrity and honesty and to succeed in that which they put their energy and heart.

Love is the elusive power of the universe which fuels all things: either the quest for love or the loss of it/forgetfulness of it. Pisces could be called representative of the very nature of the eternal quality of love. It is vast and deep and all-encompassing. It surpasses all understanding, just like the qualities of Pisces. By utilizing Blue Sapphire, the often mysteriousness of love seems to find a way to make itself feel at home in the wearer and settle into a pool of bodily and psychic nourishment which affects all aspects of life beneficially.

Aquamarine embodies the Love vibration differently, more in the way of emotional support, telepathic understanding and intuitive wisdom shared. Both stones are beautiful gifts in a love relationship, especially if a Pisces person is involved.

Both Aquamarine and Blue Sapphire stones are very “12th house” in the zodiac – the place where the mysteries await exploration and discovery. It is the least understood house, but whispers and points in the direction of our power to know so much more than we currently believe to. It resonates with resurrection, the depths of the unknown and the initiation rites, which allow passage into the next world while keeping form. No other house says “immortality” and “eternal truths” like the 12th house, ruled by Pisces. I truly believe by utilizing Aquamarine and Blue Sapphire with intention and awareness that the user gains access to realms beyond “normal human understanding” and finds themselves released from the binds and limitations of an old paradigm that no longer serves evolution.

Aquamarine and Blue Sapphire: gifts of the Sea and the Stars. Both sit ready to assist any who would dance with their vibration under the guidance of Pisces and dive into the depths of the unknown – both within, and in the world.