Know Your Vitamins: Vitamin A 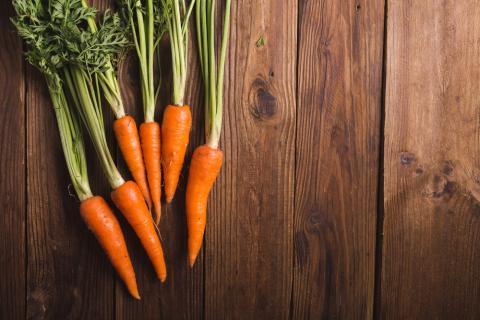 Vitamin A is a fat-soluble vitamin. There are two forms in which it is found: as provitamin A (retinoids), and as performed vitamin A (carotenoids). Retinoids – which include retinol, retinal, and retinoic acid – are readily used by the body and are found in animal sources. It is retinol, however, that is most used as it can convert into retinal and retinoic acid.

Retinol affects the immune system and vision. When the body uses retinol for vision, it is absorbed and transported to the retina of the eye. From there, it is oxidized into retinal, which helps the eye with night vision. A lack of retinol can result in poor night vision, or night blindness.

The other compound of vitamin A, carotenoids, comes from plant food sources. They are the reason our fruits and vegetables come in pigments of bright yellow, orange, and red. There are over 600 carotenoids, but it's the carotenoid beta-carotene that is the most sought after part of vitamin A. Most known for being found in carrots, this special antioxidant plays an important role in immune system, healthy skin, and vision.

The antioxidants in beta-carotene combat free-radicals, preventing damage that could cause disease such as cardiovascular disease. When beta-carotene is ingested into the body, it is converted into retinol. The body will, however, only convert as much beta-carotene as it needs, so it's considered to be a safe source of vitamin.

Beyond supporting vision, vitamin A is taken for skin conditions, bone growth, leukemia, cell growth, and maintenance of vital organs such as the heart and lungs. There are studies that have been conducted to determine if vitamin A plays a significant role in various conditions such as HIV, but results are inconclusive.

Studies have, however, shown a possible link to cancer prevention . People who eat more foods with beta-carotene are possibly at a lower risk for various cancers. The reason for this is the antioxidants found in beta-carotene attack the damaging free-radicals that are responsible for cancerous cell growth. It has not been proven, however, that it will prevent cancer.

Vitamin A deficiencies are rare, but they do occur. A common symptom in deficiency is xerophthalmia, which is the inability to see in low light conditions. High intakes can have adverse reactions as well. According to the National Institutes of Health, symptoms include “dizziness, nausea, headaches, coma, and even death. High intakes of preformed vitamin A in pregnant women can also cause birth defects in their babies.” When pregnant, talk to your doctor about how much vitamin A you should be taking.

As always, it's best to consume nutrients through food. Supplements should be used as a second source if consuming adequate levels through food, or other health related issues, prevents one from achieving the daily requirements.