Your Non-Toxic Guide to Ant Control 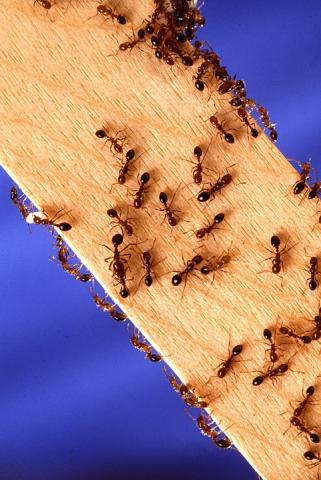 More than termites, rats, and wasps, Argentine ants might actually be the worst pests in the world. Based on their size alone, they might appear innocuous: worker ants are between 1.6 and 2.8 mm long, while queens are no bigger than 6.4 mm. Despite their tiny size, they’re major disruptors of native ant species. While they’ve only lived in the United States for little more than 120 years, they can be found across the nation with large populations in moderate climates like Southern California. As a California resident, I can attest to the subtle, yet destructive, habits of the ants. In the morning, I’ll wake up to find a thick black line running from a crack in the wall to a leftover piece of dog kibble on the floor. The kibble will be surrounded by black ants; other times the ants will surround a kitchen towel that was used to wipe clean a plate. Most days, I’ll find them on the back of my leg, crawling up my arm or, once, moving up the contour of my cheek.

I’m not a fan of using pesticides for many reasons (though organic pesticides can, at times, be a different story). But Argentine ants are a menace to native ants, and they are difficult to remove (since there can be 300 queens ants to every 1,000 workers -- plus, rarely do the ants nest in a single location, instead moving from site to site depending on food sources).  Most of all, Argentine ants are annoying. Instead of reaching for toxic chemicals like pesticides and insecticides, reach for these natural alternatives to rid your home of household pests.

This might sound like a no-brainer, but you’d be surprised at the number of openings, cracks, gaps, and spaces in a typical house. Do you have a small dent on the bottom of your door? Argentine ants need only a space of 1 mm to sneak through, which means that you’ll need to caulk any area with an opening that’s bigger than this. Is your window screen fitted or torn? Is there space underneath your refrigerator? A crack in the wall? All of these openings can be inviting to the Argentine ant. Better to double-check now–once they’re in, they’re hard to get out.

Vinegar is a strong repellent for most ants, though for inconclusive reasons. But that doesn’t mean that it doesn’t work! Fill a spray bottle with equal parts vinegar

and water. You can use this spray directly on the ants to kill them on contact, or spray around baseboards, underneath doors, along windowsills, and on any surface that ants seem to swarm. Simply spray, then wipe up an hour or so later. To further deter ants, add a few drops of the essential oils listed below.

Peppermint oil works wonders for deterring ants, likely because it prevents ants from communicating via pheromone markings. Dr. Bronner’s makes a peppermint-based all-natural soap that can be used as a spray. Simply add 1/4-1/2 cup Dr. Bronner’s Peppermint Soap to a spray bottle, then fill to the top with water. Spray this directly on ants, or use as a deterrent anywhere you see ants. In a pinch, a few drops of peppermint oil can be added to the vinegar-water mixture above.

Borax, specifically boric acid, kills ants upon ingestion. Bait ants by setting up this concoction that worker ants will carry back to their nests and give their queens. Once the queens die, the colony collapses since breeding stops. This recipe does the trick: mix 8 teaspoons of sugar and 1 teaspoon of boric acid into hot water for best dissolution. You can keep this mixture for future batches. For now, soak cotton balls into the solution and place in areas where you’ve spotted ants. These tend to be places near cracks, openings, and spaces near the kitchen and, sometimes, the bathroom. It may take several weeks until the population dies off. In the meantime, use the additional methods provided above.

Using the idea of borax or boric acid above, you can set up bait traps that kill ants upon ingestion, whether they’re eating it or bringing it back to their nest. Mix peanut butter, jam, honey, or other sweet, tasty substances with a teaspoon of boric acid. Set the trap in a location where other animals cannot get into it, such as a safe place on the counter, above the fridge, on a pantry shelf, or on a bathroom cabinet. Ensure the mixture is away from both kids and pets.

A variety of essential oils are annoying and/or toxic to ants. Try cinnamon, clove, rosemary, lemon or wintergreen essential oils. You can drop 2-3 essential oil drops on a kitchen or paper towel, then wipe baseboards and other prolific areas. Or, add to a spray bottle as described above.

Do you have any non-toxic methods you use to deter or get rid of Argentine ants?