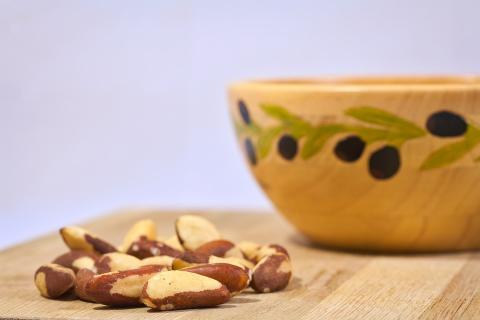 “Human health is only as good as the land we grow our food in or on.”

In other words, we reap what we sow. Trying to build a healthy diet from plants grown in unhealthy soil is like building a house without starting with a foundation. It is essential to consider the origin of foods (and other products one consumes, too!) if one aims to live a well-balanced life…with a healthy amount of selenium in store.

Selenium is a trace element that, like other trace elements necessary for our body’s function, originates from the earth. Soil contains inorganic selenium in the form of selenites and selenates, which plants accumulate and convert to the organic forms selenocysteine and selenomethionine. In animal and human tissues, most selenium is stored in skeletal muscle in the form of selenomethionine. Since selenium originates from the soil, geographic location and the consequent soil properties largely dictate the selenium content of the plants that grow in a given region. For example, selenium intakes are significantly lower in China, where the population consumes a predominantly vegetarian diet grown in soil with low levels of selenium. Regions of Europe also suffer from low selenium intake, as do those populations consuming vegan or vegetarian diets.

As a trace mineral, selenium is only necessary in the body in small amounts, but plays an integral role in the body for three main functions:

Without proper levels of selenium, these key body functions can become compromised. Symptoms of thyroid dysfunction or a weakened immune system manifest in a vast variety of manners, and it can be difficult to pinpoint exactly whether or not selenium deficiency is the root cause. The antioxidant supporting, thyroid regulatory, and immune-defense benefits of selenium are most accessible with consumption of selenium-rich foods rather than by supplement. Taking a selenium supplement if you already have sufficient levels in your body may cause side effects such as bad breath, fever, nausea, and heart, liver, and kidney problems, and could interact with other medications, and increase one’s risk of skin cancer, type 2 diabetes, and prostate cancer (for men). As always, consult your doctor first before self-medicating to take a selenium supplement.

Selenium-rich foods not only offer the immune system a boost, support thyroid function, and help to prevent against chronic heart diseases, but also contain a slew of other important vitamins and nutrients such as iron, zinc, manganese, potassium, phosphorous, and many more. Add these foods to your diet on a regular basis, and cover most of your nutrient bases—selenium and otherwise. (Note: as with all things, moderation is key; it is possible to experience selenium toxicity.)

According to the National Institutes of Health, most Americans consume adequate amounts of selenium. Selenium intake in different regions, however, varies depending on the selenium content in the soil; For example, those living in the Midwest and Western U.S. demonstrate higher concentrations of selenium than those living in the Northeast and South. Though it is not very common, consumption of over 400mcg daily is considered a selenium overdose, marked by spots on fingernails, irritation, and fatigue. Most importantly, recommended dietary allowances for selenium are as follows

Common symptoms of selenium deficiency are:

And, selenium deficiency can cause an increased risk of:

While selenium is a crucial mineral to have in our diets, it is equally as important to be sure that you are not getting too much selenium in your diet. Incorporate into your diet selenium-rich foods that also contain many other health benefits. Maybe throw together a healthy flavorsome egg recipe with some grass-fed meat and a spinach salad on the side, or make morning oats a routine. It’s tasty and easy to crunch a small handful of Brazil nuts daily, too…