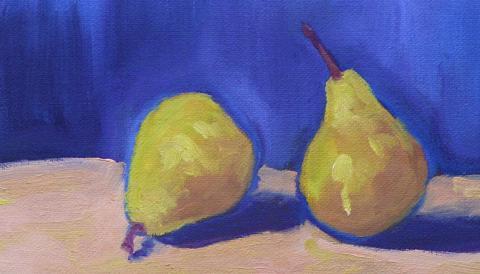 The pear is a member of the family Rosaceae, or rose family. The genus contains four species and is native to the area of the Caucasus. The Aryan tribes introduced the pear to other parts of Europe and Northern India. There are more than 1000 varieties of pears existing today and they are rich in nutrients. Cultivating and grafting of the plant was developed in Greece in approximately 300 B.C.E. During the Middle Ages pears became popular in Italy and France and the French variety was brought to England where they became the most common variety. However, the British warden pear was developed in England by the Cistercian monks at an abbey in Bedfordshire. Pears were brought to North America when the Massachusetts Bay Company ordered pear seeds from England in the mid-17th century. In 1793, John Bartram planted the seed of a pear tree that produced fruit until 1933. American botanist Luther Burbank used the two genetic lines of the European and the Asian pears to create new varieties of the fruit for the commercial market. The United States Department of Agriculture (USDA) has noted that the consumption of fresh pears in the United States has increased more than any other fruit.

The pear that is found in the grocery stores is the European pear (Pyrus communis). It shares its genus with apples, apricots, strawberries, quinces, plums, peaches, crabapples, and raspberries, as well as almonds.  It is uniquely shaped with a round body and a tapered, cone neck. The color of the fruit can be several shades of green, brown, red, yellow, and golden and there are varieties that change color as they ripen. The texture of the flesh varies depending on the variety with sweet nectar making it an ideal snack and delicious ingredient for dessert recipes. To find a pear ready for eating at the grocery store gently press the flesh just below the stem: if it gives slightly, the pear is at its ideal ripeness.

The most popular variety of pears that are found in the grocery stores are the Bartlett, which are the ones most used in canning; they are yellowish green with speckles and can be known as William pears. The Red Bartlett pear is similar to the Bartlett but has reddish skin with light vertical striping and is high in anthocyanins. The Bosc pear has a cinnamon, brown skin with a long, tapered neck with a honey quality to its flavor. The Comice pear is more round with either green or red color and has a soft texture with juicy fruit. The Green Anjou is a compact pear with a short neck while the Red Anjou pear has a rich maroon red skin and has a higher content of anthocyanins causing the red color.

The pear has many healthful benefits:

1. Nutritionally packed pears contain vitamins C, K, and B-complex, folate, and dietary fiber; minerals include potassium, copper, manganese, and magnesium and flavonoid compounds. These substances have made pears a tool for healing for millennia and today are a healthy addition to the diet.

3. Pears are an excellent addition to the diet to maintain and boost the immune system and increase the function of the metabolism. Because of their antioxidant and vitamin C content, they stimulate white blood cell production; for this reason, eating pears will help prevent illnesses like the common cold and flu. Metabolic function is increased because of the regeneration of new tissue due to the fact that it has a high vitamin C content. It also helps to heal wounds quicker and repair damaged blood vessels.

4. Other health benefits of including pears in the diet is the high content of antioxidant and flavonoid components which reduces inflammation, resulting in the lowering of the symptoms of arthritis, rheumatism, and gout. Rich in folates, pears reduces the risk of in neural tube defects in newborns. Pears contain a significant amount of minerals that support bone health, thus reducing the risk of osteoporosis.

Pears are native to Europe and found their way to North America with the settlers. They have long been used for medicinal purposes because they are rich in vitamins, minerals, and other nutrients. They are known to reduce the risk of contracting many diseases like osteoporosis, cancers, arthritis, and the flu. Pears are a sweet fruit that can be added to many dessert recipes and can be included in main dish ingredients. They are an ideal snack and a good substitute for sweets and jams.