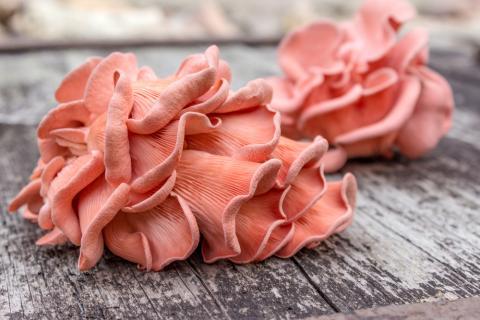 Oyster mushrooms (Pleurotis) and others are both a delicious edible mushroom and a great medicinal as well.  The wild ones are the tastiest, if you’re lucky enough to find them, though you can often find them at the grocery store or even grow your own with one of the many commercial growing kits available.  I found a small cluster this summer during what was an otherwise dismal mushroom season here in the Southern Rockies.  They smelled like aniseed…something I’ve never noticed with those I grow at home.  My favorite way to prepare oyster mushrooms is to dry sauté them. But teas, powders, double extracts and other preparations are great for stronger medicine.

I’ve written previously on how oyster mushrooms encourage a healthy liver.  Now, let’s take a closer look at these yummy and helpful mushrooms with five things you may not know about them.

1. Oyster mushrooms give love to the lungs.

Oyster mushrooms have traditionally been used as a lung tonic and are anti-viral, with activity against the pandemic H1N1 strain of influenza virus.  (The majority of respiratory infections are caused by viruses.)   A component of oyster mushrooms showed anti-allergy effects in children with recurrent respiratory tract infections. Another component reduced the number of respiratory infections in high level athletes who otherwise have increased susceptibility to infection because of their strenuous training.

Oyster mushrooms stimulate the function of the immune system, inducing production of immune chemicals important for fighting viral infections and cancer. The study mentioned above found that an oyster mushroom-derived chemical maintained the level of important immune cells, called natural killer (NK) cells, in athletes. Those taking placebo had decreased NK cell counts from heavy training.  Yet another oyster mushroom chemical activated the activity of dendritic cells, another important immune cell in the body that is important for “training” the immune system to recognize pathogens.

In TCM, oyster mushrooms are considered sweet and warming, and they act on the Liver and Kidney meridians. They’re used to tonify the Kidneys, strengthen Yang, dispel cold and also for numbness in the limbs, low back and leg pain, and male reproductive issues.

What’s good for the environment is good for us!  And, oyster mushrooms may be helpful for environmental cleanup. Oysters were able to degrade polycyclic aromatic hydrocarbons in creosote-contaminated soil, break down the type of plastic commonly used in grocery bags and degrade a pthalate, a plasticizer and is a known xenoestrogen.

With all of this, what’s not to love about oyster mushrooms? Serve some up today!