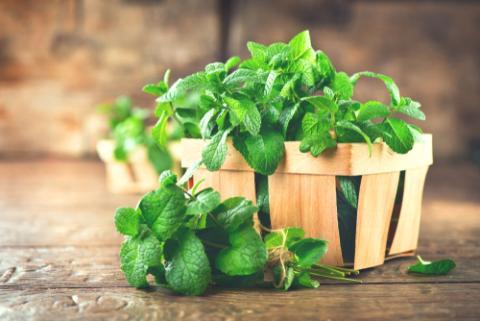 Mints are easy-to-grow perennials that are a beautiful and (usually) lovely-smelling addition to your garden—even if your garden is limited to a balcony, like mine is.  They do well at sea level. They do well at mountainous elevations. They can hack cool, damp summers or hot, intense summers. They are fine being buried in snow and will be there waiting for you in the spring.   While mints generally prefer rich and well-drained soil, I’ve grown them in heavy clay soils.

Aromatic mints share a number of properties. In general, they are strongly antibacterial and antiviral and I use a number of them interchangeably in clients for issues such as cold and flu, as well as for cold sores. Mints, in addition, tend to be helpful for indigestion. Most mints also have a soothing effect on the nervous system.

Here are 5 of my favorite mints that have use in both the kitchen and the medicine cabinet. There are others that are great medicine—such as skullcap and motherwort—that are too bitter for the kitchen but feature fantastic medicinal properties.

Lemon balm (Melissa officinalis) is the most famous mint for treating cold sores (an outbreak of herpes simplex virus), but most mints will work.  Lemon balm is my favorite smelling mint, with its sunny, lemony scent.  It’s a wonderful herb for gladdening the heart, whether by simply smelling its scent or by drinking a delicious cup of lemon balm tea.  And, speaking of the heart, lemon balm may also soothe palpitations, especially if associated with higher-than-normal thyroid function and/or from nervousness.

Lemon balm can be used for a great summer mocktail by muddling it in sparkling water and adding a few ice cubes.  (It’s also great in gin and tonics…).

Catnip (Nepeta cataria) may make your resident feline go bonkers, but for us two-legged types, it’s calming instead and is a good addition to sleep pillows.  Catnip is also wonderful support for those of us whose tension manifests in the digestive system—say, as butterflies in the stomach or an overly active bowel when nervous.  This is a safe one to use for children, and a traditional way to use it is in a bath…what a nice way to soothe the aches and pains from the flu while, in tea form, also helping bring down a fever.  (Here is some information on fever “red flags” to watch out for in children.)

Catnip can also be used as a cooking spice!  Just dry it, crumble it, stick it in a shaker and you’re good to go. Use it in sauces, salad dressings, marinades, soups, and stews.

Many folks love the flavor of peppermint; I prefer that of spearmint (Mentha spicata), though they blend well together. Lately, this has been the herb I grab at the first sign of a respiratory infection.  If I get on it early, it doesn’t progress.  It’s also used to support proper androgen metabolism, which may be helpful for disorders such as polycystic ovarian syndrome (PCOS), where androgen excess may lead not only to inappropriate hair growth in women (on the face or chest or back), but also to fertility issues.

Spearmint can be used for a simple syrup drizzled sparingly over fruit salads, added to smoothies, or used in sparkling water like lemon balm.  Chop up spearmint leaves and stir them into plain yogurt; small amounts can be used in lamb recipes, either as an infused oil or as a part of a chimichurri blend.

Ah, the flavoring for everything from toothpaste and breath mints to candy canes and cordials. Peppermint (Mentha piperita) is a popular herb for colic (though never use the essential oil for small children…just the herb tea). Peppermint is traditionally reached for in cases of inflammatory gut issues. In this case, it’s effective as an enterically coated capsule of the essential oil diluted in vegetable oil…one of the rare instances you’ll encounter where oral dosing with an (appropriately diluted) essential oil is a good way to go instead of just using tea or extract. Peppermint is also a useful addition to blends for nausea and can be used either as a tea or liquid extract for this.

Peppermint is popular in dessert recipes, especially those also involving chocolate. It can also be used to freeze in creatively crafted ice cubes. A little bit of peppermint also works with grilled chicken.

Yes, it’s a mint!  In fact, all sage species are mints (as are lavender, rosemary, oregano, thyme, and many other aromatic medicinal and culinary herbs).  I’ve been sniffing clary sage (Salvia sclarea) essential oil lately for mood and have noticed I’m having lots and lots of vivid dreams, seemingly all night long.  Clary sage is known for its effect on dreaming and, if you want better dream recall or more vivid dreams, it’s another good sleep pillow ingredient, whether as a drop of essential oil or a handful of the dried leaves.  The herb is useful for a lack of energy and also makes a lovely foot bath for worn out, achy feet at the end of a long day.  The name “clary” is derived from “clear-eye.”  Mucilage (a slimy carbohydrate-based substance) from the seeds was used to soothe irritated eyes.

By the way, clary is wimpier than the other mints here in terms of its tolerance for low temperatures.  It grew to huge proportions in my yard in San Francisco, but it would keel over pretty quickly here in Durango, Colorado, at 6500 feet.

Clary sage can be used similarly to regular garden sage (in recipes with fish, poultry, pesto, tomato sauce, and butter-based sauces, for example), but use it in much lower amounts…it’s strong.

A note on growing mint:  If you have more than one mint species in your garden, keep them separated.  Mints are famous for hybridizing. This can be a great way to come up with an interesting new mint plant in your yard, but isn’t so great if you’re in love with your particular plot of spearmint that over a few seasons becomes something that’s not entirely spearmint. Also, mints can spread like wildfire when happy.  So potting them or having them in a raised bed can be good options, and will keep them from any hybridizing hanky panky.

How To Identify Wild Mint

If you’re lucky, you may even have wild mint show up in your garden…just dig it up and move it, though, if it moves into one of your mint beds.  How do you know you’ve got a mint as a garden “volunteer”?  It will have a square stem (though some non-mints do as well). The leaves are arranged opposite from one another along the stem and they get progressively smaller the higher up they are. The leaves usually have a strong scent. The flowers are small and have 5 connected petals: 2 on the top, 3 on the bottom.