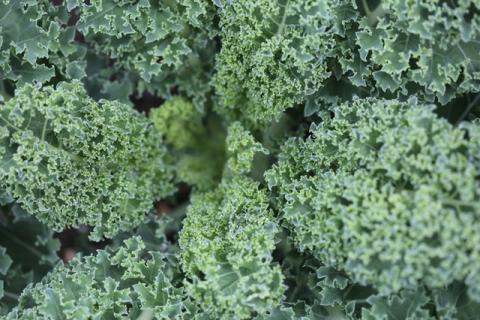 Kale is a member of the species Brassica oleracea, which includes cabbage, Brussels sprouts, kohlrabi, cauliflower and broccoli. It has been cultivated for more than 2000 years and though originally found wild in the Mediterranean region it is a cold climate tolerant plant. The term kale is derived from the Scottish word “kail” and the word was used in the 19th Century, referring to dinner. The crop was grown in Scotland in fields known as kailyards and was a staple for meals and fed to the livestock. Though popular in Europe for centuries, kale only recently became known in America and valued for a rich source of vitamins and minerals. American cooks used it at first for a garnish then began to experiment with recipes and found it a versatile addition to menus.

But kale is more than the perfect garnish with an interesting history – it’s also officially a “super food.” Here are 4 reasons to start noshing on some kale:

1. Kale is a high fiber vegetable that is low in calories and contains no fat. It aids digestion, which helps keep the lower digestive tract healthy. It also is a powerful antioxidant containing carotenoids and flavonoids that help the body protect against various cancers.

2. It is rich in iron and contains more than a serving of beef. Iron is essential for the formation of hemoglobin, which transports oxygen through the body. Iron also is important to proper liver function. Kale is also high in enzymes that help with cell growth.

3. Kale has a high Vitamin K content which is necessary for blood clotting and bone health. It has been found that an increase of Vitamin K can help reduce the effects of Alzheimer’s disease. It is rich in Vitamin A that is conducive to eye heath and contains Vitamin C, benefiting the immune system, regulating the metabolism, and aiding in hydration.

4. As an anti-inflammatory food, one cup of kale contains ten percent of the RDA of omega-3 fatty acids, helping to prevent arthritis, asthma, and autoimmune disorders. It also supports cardiovascular health and balances cholesterol levels.

In the United States kale is cultivated in three varieties. Curly kale has ruffled leaves with a fibrous stalk and is a deep green color with a pungent flavor. The ornamental kale has a more mellow flavor with tender leaves and can be green, white or purple in color and is also called salad savory. Dinosaur kale, also known as Lacinato or Tuscan kale, is a slightly sweeter variety with dark bluish-green leaves on lighter stalks and has a pronounced texture.

Kale can be stored in the refrigerator for three days but the longer it is stored, the stronger and more bitter the flavor. Kale must be washed before using as it tends to hold dirt and sand.  It can be boiled, sauteed or simmered and adds a unique flavor to salads.

Use medium to medium low heat.

4.         Take the frying pan off the heat and add the egg, salt, and seasonings, and whip up the mixture until frothy.  Then cover and place back on heat.

5.         Mince the garlic on the serving plate while the omelet is cooking.

6.         When the omelet is done to preference, a texture from fluffy to firm, turn off the heat and with a spatula cut the omelet in two even sections.