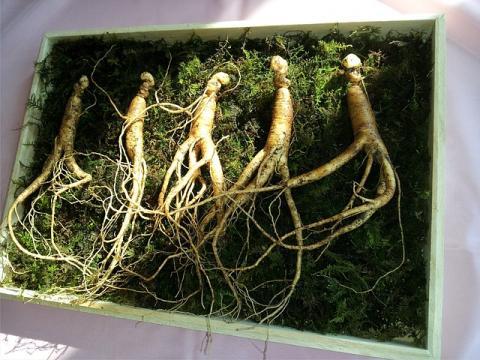 Ginseng was discovered more than 5000 years ago in the mountains of Manchuria, China. The name is derived from the Chinese word “jen” meaning the form of man and “shen” defined as the crystallization of the essence of the earth.  However, this ancient herb was used approximately the same time in North America by many of the tribes there, though the European invaders did not know of its existence until the 16th century. It was known by the Creek tribes as “white medicine”; the Chippewa people called it “white swan”; and the Seminole tribes used it as “love medicine.” In Ayurveda, the herb is known as ashwanandha and it grows in India, Northern African and the Middle East. These three forms of ginseng have primarily the same healing powers and have the same basic characteristics. The plant stands up to twenty-seven inches tall with leaves similar to that of the strawberry plant. Its main characteristic is the root, which grows in the shape of the human form. Ginseng contains a nontoxic ingredient known as adaptogen which aids the body in dealing with physical, chemical and biological stress; it also regulates the central nervous system, the cardiovascular system and the endocrine system.

Ginseng was used by healers long before the development of western medicine. The plant contains vitamins B1, B2, B6, B12, A, D3, E and C, as well as folic acid and nicotinamide. Its high mineral content includes calcium, iron and zinc. As a result of its vitamin and mineral content, ginseng has many healing benefits.  Here are 5 of them:

1. In the treatment of Type-2 diabetes, ginseng has been found to reduce the effects of the disease. It helps control the sugar level in the body, especially after a fast or eating. Studies have shown positive results, making this a valuable herb to add to the diet of those with the disease.

2. Ginseng is beneficial for both men and women. Women who suffer from menstrual cramps have found that taking ginseng reduces this monthly pain. For men who experience erectile dysfunction, ginseng increases the blood flow to the penis. Couples can enjoy a cup of ginseng tea together in the morning or as a late night beverage.

3. Ginseng contains a substance known as “ginsenosides” which heals cancer cells and prevents them from developing. They are natural compounds that help reduce the formation of blood cells in some tumors. They also stop the rapid formation of abnormal cells on a mass scale and thus prevent the development of cancer.

4. Ginseng helps in weight loss as an appetite suppressant. It regulates the metabolism to increase energy, enabling more exercise. Ginseng also lowers bad cholesterol levels in the blood stream. With the added exercise, the positive effects on the metabolism and the lowering of blood cholesterol it is a valuable aid in preventing heart disease and reducing the chance of blood clots lowering the risk of stroke.

5. Ginseng is effective in building up the immune system, helping the body to resist disease. It prevents infection and protects the body against viruses. It is an effective cure for many illnesses and used regularly will help to keep the body from sickness.

Ginseng has been well-known as a supplement in tincture form or taken as tea, but it is also a delicious addition to many recipes.

3.        Pour the marinade over the chicken breasts and put in the refrigerator for at least an hour (but preferably overnight).

4.         Take the marinated chicken out of the refrigerator and place in a preheated 350F degree oven.

5.         Bake for one-half to three-quarters of an hour, until chicken is cooked thoroughly.

6.         Per person serving: two chicken breasts over a bed of half of a cup of rice and cover with four tablespoons of the marinade.