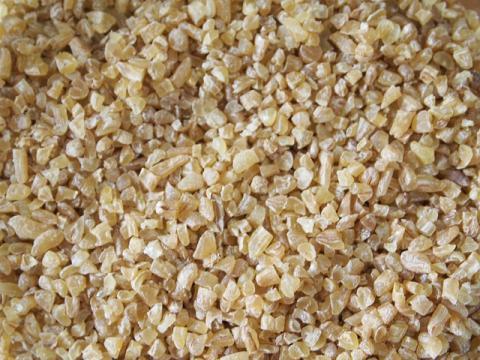 Bulgur is processed wheat that is native to the Mediterranean basin region and is one of the earliest processed foods that began being used approximately 4000 years ago. It is made by steaming wheat then drying it and cracking the dried kernels. Bulgur was initially processed by boiling wheat in a huge pot for many days to be sure it was thoroughly cooked; then the contents of the pot were spread out on roofs to dry in the sun. Once the wheat was thoroughly dried it was pounded in to pieces and sorted into sizes for various uses. Bulgur was, and is, valued because it resists mold, deters insects and can be stored for long periods of time. It has been a staple food in many Middle Eastern countries for millennia and has many names like “dagan” in Israel; the Romans called it “cerealis” and in the Middle East it is known as “arisah.” It is packed with nutrients and has been used in Ayurveda and holistic healing because of its many health benefits.

The dried grain has a higher concentration of proteins and carbohydrates than unprocessed wheat. It is whole wheat and contains many vitamins and minerals that include fiber, protein, iron and vitamin B-6.

Here are 5 reasons to get more bulgur in your diet:

1. Bulgur is rich in magnesium, which produces relaxing neurotransmitters. It is used as a sleeping aid that calms the mind and soothes the nervous system, allowing long and restful periods of sleep. It is advised that those with insomnia and other sleep disorders add bulgur to their diet and within a few weeks they will experience improved deep sleep.

2. As an antioxidant, bulgur contains phytonutrients that reduce the mutation of healthy cells and thus the risk of diseases like cancer. It also eliminates inflammation, which relieves the stress on the body, reducing the amount of free radicals in the body. Bulgur contains high amounts of zinc, which strengthens the immune system.

3. Bulgur increases circulation and protects the body from heart diseases. High in iron, it helps to create red blood cells, reducing the risk of anemia and its side effects like stomach disorders, weakness, fatigue, and disorientation. It also is high in potassium, lowering blood pressure and reducing the strain on the vascular system. It balances the presence of cholesterol in the system by eliminating excess omega-6 fatty acid build-up in the arteries.

4. High in mineral content, bulgur strengthens the skeletal system, thus reducing the risk of osteoporosis. It improves bone density because of the presence of manganese and phosphorous.

5. Bulgur aids in the prevention of Type 2 diabetes because it regulates the release of insulin in the body and improves blood sugar levels. It is also rich in fiber, maintaining a healthy digestive system. It prevents bloating, indigestion, cramping and constipation and helps regulate evacuation of the bowels.

Bulgur is internationally known and used in restaurants and found in home pantries throughout the world. It has been added to the healing foods for many natural methods and Ayurveda recommends bulgur for Pitta and Vata tendencies. It is best known as the main ingredient in tabbouleh.