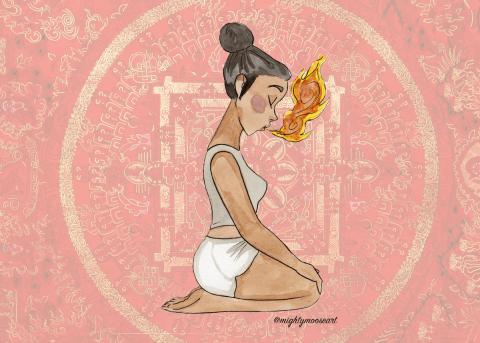 Do you wake up every morning feeling fresh and rejuvenated? Is your mind clear and skin glowing? If not, you may be experiencing the accumulation of Ama in the body. A body free from Ama feels light and generally enthusiastic about life and has a pink tongue and blemish-free complexion. Where Western medicine is left without explanation for certain conditions which seem to never be resolved, Ayurveda is wise to the notion of Ama and how to relieve it in order to bring one out of the path of dis-ease and back into alignment with wellness.

Literally translated as “undigested,” Ama is a sort of toxic byproduct of undigested/unassimilated food in the body.  It is created as a result of low or ineffective digestive fires, known in Sanskrit as Agni. In a normal, healthy body, the entirety of food eaten is properly digested by the Agni. Approximately half then is taken into the body as nutrients to feed the cells and the other half is eliminated as waste products. If the digestive fires are weak and food is not properly being digested, various symptoms arise in the body, such as:

If there is Ama in the body, the Agni is compromised and in Ayurveda the presence of Ama is actually stage one of the development of any dis-ease.

How To Strengthen Agni (Digestive Fire):

The first step in removing Ama is actually to bring the body's Agni back into full function so that no further Ama can be created; this is followed by a detoxification process to release the accumulation of Ama.

One of the simplest practices to help bring the body's Agni into balance is the pranayama techniques of Bastrika and Kapalabhati breathing. Both of these breathing practices utilize an intensified drawing in and out of the breath.

Bastrika is the practice of strongly moving breath in and out each nostril, one side at a time. So there is a strong inhale and exhale out of the right nostril while blocking the left, and then the right is blocked while a strong inhale and exhale is taken through the left and this process is continued for several minutes. This not only helps to activate the body's Agni, but also stimulates a harmonious balance of the right and left hemispheres of the brain.

Kapalabhati breathing is also known as “breath of fire” and is one of the basic Shatkarma (cleansing) practices in Traditional Hatha Yoga. It has also been referred to as the “bellows” breath as it requires that the abdomen be inflated and deflated like a bellows with each breath. In this breathing practice the yogi concentrates on a strong exhale through either pursed lips or through the nose while then letting the inhale take care of itself as a bellows. The breaths are in rapid succession and not only increase the body's Agni but also strengthen the abdomen as well as creating the effect known as “the shining skull” -- another translation of this breathing technique in Sanskrit – as it brings clarity of mind and helps to open the third eye center.

Many yoga postures help to strengthen the body's digestive fires. One of the most complete ways is to incorporate Surya Namaskara, or the Sun Salutations routine. Not only does this 12 posture series stretch the spine in all ways and activate all of the endocrine glands and chakras in the body, it also moves the lymph and helps to strengthen both the Agni as well as the Bhuta Agni (the spiritual fires), which contribute to the elimination of excessive Ama.

Ghee is an excellent support in bringing the Agni up as well as in removing excess Ama from the body. Other herbs such as ginger, turmeric, and black pepper support Agni in the belly and also move Ama.

How To Remove Ama:

Focusing on eliminating the built up Ama in the body will also result in an increase in Agni, so there are various foods and practices which can help with the detoxification process such as starting the day with warm water, or once per week a warm salt water flush (known in Sanskrit as Sankha Prakshalana).

Cutting down on the intake of coffee, dairy products, alcohol, sweet and fried foods is helpful in releasing Ama from the body, as these items are generally not fully digested and rendered not useful in the body from the beginning. During the stages of Ama detoxification it is a good idea to also avoid fish and eggs as well as other meat products and stick to a diet that is more focused on Bringhana foods.

Other supports for removing Ama include the Ayurvedic herb Triphala and the herbal formula Chyawanprash, a mixture of various herbs long revered for their ability to detox Ama. Chyawanprash comes in a black, jam-like consistency that can be spooned out or spread on toast.

Eating largely Sattvic foods and adding such practices such as mantra, meditation, yoga, and Ayurvedic spa treatments such as abhyanga massage will benefit the body much in releasing Ama.

How to Know Ama is Removed:

If you have effectively released built up Ama from the body you will know it. Not only will you wake up feeling refreshed and renewed, clear in the mind, but you will find a new love and vigor for your life that once felt lost. Strange symptoms will disappear and your body will feel lighter and younger again. The skin will begin to glow and you will have a sense that you have reached a new level of health that is obtainable by all people, not only the young. Thanks to the specific knowledge of Ayurveda it is possible to bring health and clarity into the body where once dis-ease, depression and fatigue sat. By removing Ama the body can get a “reset” and start again to approach life from a place of balance and harmony.