Intro To Hindu Deities: Hanuman As The Primal Force Of Devotion 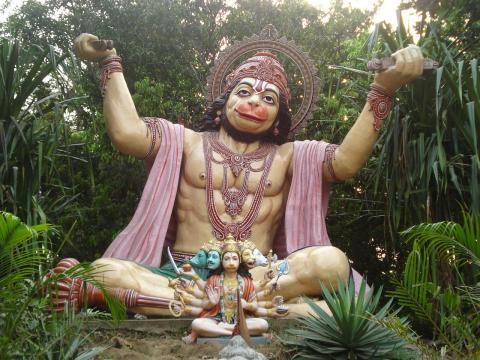 The most popular story of Hanuman is that of Lord Rama (an incarnation of Vishnu) and his beloved wife, Sita—who was abducted by the demon king and rescued by Hanuman as an act of love and devotion. In the story, it was through the loyalty and selfless acts of Hanuman to his friends Rama and Sita that Hanuman remembers and embodies his immortal gifts.

Within the guts and core of every person is what we call the primal human, that part of us which contains all of the basic urges and instincts granted even to the most basic mammal. It is the primate nature which wants for and moves in the direction of survival, pleasures, and producing progeny, continually. Though we are capable of so much more, many humans choose to remain servants to and embodiments of the primal instincts calibrated in the lowest chakras of the body. Hanuman, depicted as a monkey, is representative of this animal instinct and the basic capacity found in humans.

Rama and Sita represent the perfect divine couple who are devoted to each other and supremely in love. In the story of the Ramayana, where Hanuman shows up, it is clear that Rama is head over heels for Sita and she for him. They are the epitome of cherished divine love and inner union. Rama is also an incarnation of Vishnu, God of preservation of the universe.

It is said that every time Vishnu incarnates it is because something “threatens” universal balance and harmony. In the case of the story of Rama and Sita, these two represent the divine masculine and feminine, as well as a perfectly balanced, awake human whose masculine and feminine channels are active and alive in the body, and joined in the pineal gland at Ajna chakra.

In the Ramayana, Sita is abducted by the demon king, and so therefore one could interpret this part of the story as the feminine nature being taken over by a lower force, one that would wish to silence that part of the Self and keep her (and the force she represents as the divine feminine) captive. It is such a common and prevalent reality today that society (also represented by the demon) has taught us to stuff our emotions and not trust the intuitive, magical nature (which is the feminine). This reality alone, in my opinion, is cause for Vishnu to incarnate…as the balance within the body kingdom, as represented by life on earth, is currently threatened.

Rama, though he is a strong and powerful ruler and king, loved by his people, is devastated and severely distracted from his duties as king when Sita is gone. Rama with his Sita is King of the body temple, an awakened human presiding over the body kingdom in divine royalty. The masculine nature (logic and reason) knows he cannot function at peak performance without his feminine (emotion, empathy, and intuition) at his side. The pineal gland, after all, does not light up to reveal the super-consciousness, advanced human powers, and self-realization if only one of our spinal channels are open. We require the union of both Ida and Pingala Nadi in the spine before the holy of holies in the center of the brain opens its jewels to us and reveals our true potential as divine humans.

The demon king knows that Rama will be dysfunctional without Sita, for he is the lower mind, the ego personality; he is society and old programming who wishes to keep the feminine aspects of self as subject to him. By so doing, Rama, the Divine masculine who reigns supreme in the body/mind as king alongside of his queen, will not be able to perform the duties of unity consciousness in his world, and will thereby be subject only to logic and reason and to the primal urges and individualistic thoughts of the lower mind/body.

The masculine alone is the logical mind. It is reason, linearity, and structured thinking. The feminine is the emotional and psychic self. She is intuition, surrender, and magic. The demon king also represents fear, uncertainty, negative self-talk, or any self-deprecating action, word, or belief. “He” decides that the magical, intuitive, emotional nature should be kept quiet (captured) and in service only to him. But the awakened being—though manifesting in primal form—who has tasted what it is like to have both aspects of self, the logical and intuitive minds, working in harmony will stop at nothing to “rescue” the beloved counterpart and re-member himself/herself in wholeness.

Lord Rama calls on Hanuman in the story, as they are longtime friends—for the awakened individual is able to see the benefit in befriending, not cutting out the primal, instinctual self. For as mentioned in the article on Sugilite and Higher Love, the fullness of love and consciousness comes from embodying the entire spectrum of possibilities as expressed through all of the chakra centers—not just the higher centers.

Hanuman, the primal nature, is in deep devotion to Rama and Sita. This is because after one is awakened to their divine nature, the human self (which includes the animal instincts of sex and survival) becomes “in service to” the divine self. It is ever devoted because it knows it is not really in-charge. That “it” (this primal nature) is so much more powerful when devoted to the Source of consciousness within, from which we emanate.

It’s so very true. The physical body is strongest when connected to the inner power source of Infinite Consciousness. We activate greater potentialities within us once we have surrendered to the “something greater” within us which enlivens us and is the Source of our very lives.

Before Enacting Hanuman Within

If you have experienced life without the awareness of Source, God, or Universal Power (or whichever term you prefer)—which is most of us at some point—you have become aware of how powerless you can really feel when relying solely on your own human capabilities and strengths. We can feel so small in this great big universe, especially if we think we have no help, no connection to something divine, or if we feel alone or isolated. Sometimes it is necessary to feel these things in order to kick the door open in our consciousness to what is beyond the mere human. This “pre-divine consciousness” state is actually the separation point between animals and humans. This pre-awakened state is the phase of many humans on earth right now, actually, and it is why the understanding of and invocation of Hanuman consciousness within is so important now.

It is simply a step in the evolutionary cycle of all to be pre-remembered. Hanuman arises in our consciousness when one is “ready,” and then, after his invocation within, life will never be the same. I am sure you, the reader, understand what I mean. I feel humanity is at the stage of needing Hanuman consciousness invoked right now in our reality. It is the impetus for the timing of this article, actually.

By understanding the story of Hanuman, we remember that our primal nature is devoted to the force of preserving our life, embodied as the balance of the divine masculine and feminine within our bodies. Our physical, lower-mind self “knows” that all is well in our world when our brain hemispheres are balanced and our energies are harmonized and working together. The tale of Hanuman is also a shout out for practicing yoga, since the premise of hatha yoga (or any yoga for that matter) is to balance the inner masculine and feminine channels for union of the entire self (ha-tha = sun-moon).

Yoga (and other similar practices) is one way we can invoke and embody Hanuman consciousness within ourselves. It shows devotion to the union of shiva/shakti forces in the body as depicted by Rama and Sita. Hanuman is also an incarnation of Shiva, who is the eternal yogi in infinite meditation for the bringing together of the inner masculine and feminine.

When choosing to invoke Hanuman consciousness within, we are asking the primal, instinctual nature and our physical vehicles to stop at nothing in order to “rescue” or bring back together the inner masculine and feminine. The gift we receive by completing this heroic task is, just like in the story of Hanuman, the activation, or resurrection of our divine gifts and what could even be called superhero powers through this devotional act to inner union.

In the story, Hanuman was able to jump over the ocean, carry a mountain, and grow both giant and small as needed in order to complete his mission. In the same way, by devoting our lives to union within and a merging of our masculine and feminine nature in perfect balance, we will find that we can access gifts and potentials we never knew we had. We will be able to “move mountains” so to speak, in our reality. We will be large where we need to be and invisible when necessary. We will have the capacity to leap over the seemingly impossible with ease and grace and find that our entire world circles around us in appreciation (whether silent or spoken) for standing in our personal truth…as it will inspire the lives of those we touch.

“I now choose to invoke that part of me which is primal and instinctual. The part of me that is fully human and fully incarnate, but who knows, through a spark of love in the center of my heart, that by uniting seemingly opposing forces within my physical vehicle through practices such as yoga, that I can activate my divine potential. I now choose to be fully devoted to the union of my inner masculine and feminine and will stop at nothing to bring balance to my inner world. I feel with me now an inner surge of empowerment, enlivening my being when I place my full heart and attention on the unification of shiva and shakti within. As I experience this inner union taking place in my body, I am aware that I will see this force at play in my external world as the coming together of masculine and feminine in all its forms. I activate loyalty to my own awakening process, knowing that the unification of my inner Rama and Sita will bring harmony, joy and love to my body kingdom/queendom and that all will flourish in my life as a result. I now choose to accept the good I will receive and experience as a blessing bestowed upon me from the dedication I now enact to my own inner love project. For I know that harmony and love within my being means the same will be experienced in the world around me. And so it is.”