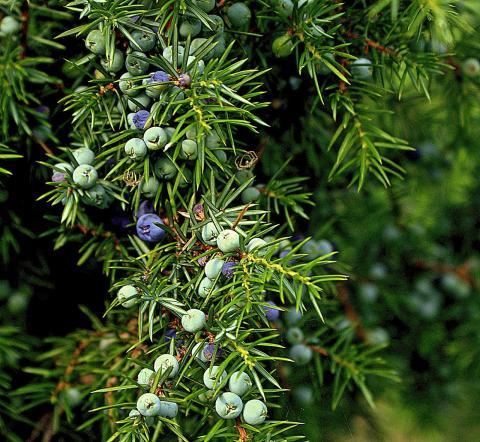 When folks think of medicinal plants, they usually picture herbs, flowers, and such.  But don’t forget about trees!  Many tree species are great medicine; an entire book could be written on them. I’ll take it easy on you and cover just 5 really good ones here. Most likely one or more of these can be found near you.

Oak as medicine goes back thousands of years, though it’s not often included in modern herb books.  The leaves, bark, and galls are all used and are prepared either as a dried powder, as a tea, or as a tincture. Oak is an “astringent” medicine. It tightens up leaky, boggy tissues, stops bleeding, and dries up excessive secretions.

I use oak most often for “full on” diarrhea…great remedy to know if you’re on the trail and are lucky enough to have some oak nearby.  It’s also useful for chronic loose stools (what is sometimes called “porridge poop”).  But keep in mind that it’s important to deal with the cause, not just the symptoms. For instance, profuse diarrhea may be due to digestive tract infection and require a stronger antimicrobial herb along with oak. On the other hand, chronic loose stools may be related to weak digestion, in which case working to improve digestion will be important in the long run.

Oak is also a great topical support for abrasions and burns, helping to form a protective layer over the area to assist in healing and reduce chances for infection. Oak is a great gargle for a sore throat with swollen glands and also for bleeding gums. At the other end of the digestive tract, an oak salve is useful for hemorrhoids.

Note that oak is not for long term internal use, unless you want to wind up constipated (which actually happened to a student of mine…).

If you’ve got rivers and streams nearby, chances are you’ve got alder.  We have a lot of lovely alders here in Durango along our waterways. My use of alder comes from the herbalist Kiva Rose, who’s experimented extensively with it.

Though alder does many things, I use it mainly for lymph system support.  The lymph system is key for dealing with infections. It is one route of travel for immune cells and chemicals and also is important for dealing with the residual crud after an infection.  “Swollen glands” are inflamed lymph nodes that may occur during an infection, and alder is great support for moving the lymph and reducing the inflammation.  For this, one can harvest in early spring the twig ends and catkins. Allow them to dry for a few days to a week, depending on the humidity in your area, before tincturing.

The leaves are also handy. They, along with the twig ends, make a good general-purpose salve helpful for abrasions, contusions, joint pain, and muscle injuries.

Walking through a pine forest is true aromatherapy, and what you’re smelling—the aromatic oils from the trees—is part of pine’s great medicine.  In Japan there is a therapy called “Forest Bathing” that involves regularly spending time in the woods.

Aside from the beauty of nature around you, while you’re walking through the pines (and/or spruces, firs, hemlock, redwoods, etc.), you are walking through airborne chemicals released by the trees that have been shown to do such things as reduce blood pressure and anxiety while enhancing mood and cognitive ability.

Plus, these scented molecules are strongly antimicrobial, active against respiratory viruses and pathogenic bacteria.  The needles, inner bark, and resin are all rich in these oils along with beneficial antioxidant and anti-inflammatory flavonoids.  Pine needles are also a source of vitamin C.  I like pine needle or inner bark as part of my cold and flu formulas. Not only do they help with the infection directly and via the immune system, but they also effectively reduce congestion.

The resin is a great respiratory remedy as well, and is fantastic in antiseptic salves.  But it’s pretty messy to deal with.  I reserve it for use in making incense…pine resin smells divine and resins from different pine species smell somewhat different. For instance, resin from Ponderosa Pine is, well, “piney” with some citrusy notes…it’s what generally comes to mind when we think “pine.”  Resin from Pinon Pine is definitely “piney” but also has a strong, sweet balsamic scent.  Just don’t walk up and yank off a chunk of resin, though. The resin is an important bandaid the tree produces to protect wounds from infection. Instead, look for excess resin that has run down the tree below the wound or for chunks of resin on the ground beneath the tree.

I was taught in one of the herb classes I took that willow is great for making magic wands!  Willow is an easy-to-find source of medicine, though you may want to avoid the Whomping Willow while out gathering bark.  Beyond Harry Potter, willow is most famous for being one of the original sources (along with meadowsweet) for aspirin. It contains salicin and its derivatives (aspirin precursors) and has been used for thousands of years for headaches, muscle aches, joint pain, fever, and pretty much anything else you’d use aspirin for nowadays.  Though willow’s effects are often attributed to salicin and its relatives, these effects are likely augmented by other willow components such as flavonoids and other polyphenols.

For harvesting, I leave the trunk bark alone and go for the twigs. A sharp knife can be used to peel the thin bark, which can either then be dried for use as a tea or used to make a tincture. Willow should be avoided by folks with aspirin allergies. Also, like aspirin, it should not be used in small children with fevers, to avoid the possibility of Reye’s Syndrome.

I have a freezer full of chokecherries from last year that I still haven’t gotten through. I guess I got a little carried away harvesting. Herb books usually only talk about the bark, but the fruit is also useful, beyond simply being delicious when prepared as chokecherry syrup, jelly, or wine.  As with other dark berries, chokecherry is chock full of antioxidants, along with a wealth of nutrients. I like them for vision support and capillary fragility, along with a welcome boost to the immune system. Chokecherries were used by various indigenous groups in North America as a digestive system tonic.  Note that chokecherries are not the same as chokeberries.

I like chokecherries best as a syrup.  You simmer them down in water, strain out the seeds, then, while the thick liquid is still warm, stir in some raw honey.  I use 1 part honey by volume to 2 parts chokecherry.  This isn’t enough honey to preserve it, so you’ll have to store it in the fridge.

The bark is perhaps the more famous medicine from the chokecherry tree.  The bark makes a sedating and effective cough syrup, great for those nights you or your child are up hacking your lungs out. Aside from its better known use for coughs, the bark is also a heart and lung tonic. I use it as part of my formula for heart palpitations and anxiety.  It’s also supportive for hot, inflamed mucus membranes, whether respiratory, digestive, or elsewhere.   As with willow, I avoid the trunk and go for small branches and twigs to harvest the bark.  It can be dried and stored for tea or made into a tincture.