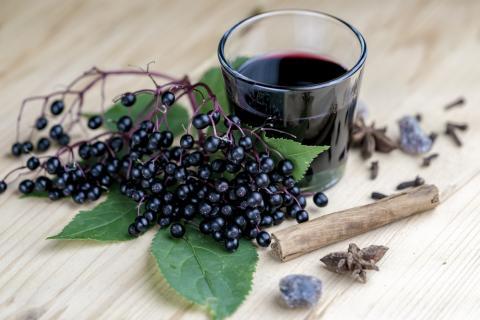 Elderberries are a member of the family Caprifoliaceae, commonly known as the Honeysuckle family of the genus Sambucus L. or elderberry P. that contains five species with several subspecies and varieties. The plant grows throughout the world in the temperate zones and the color varies depending on the region. It is a highly nutritious food that contains many beneficial nutrients. Its thick skin makes it difficult to store fresh and is commonly used dried, as an extract, in tinctures, and in powder form. In North America the Native Peoples used elderberries in many different ways. The stems were made into flutes and whistles and used for kindling, and the smaller stems were used as sticks to start fires. They would rub the inside of their cedar-root baskets with the berries to make them waterproof. The branches were used to make arrow shafts. The name of the plant “elder” is not certain; it was definitely derived from the Anglo-Saxon language, either from the word “ellen” meaning fire kindler or the word “aeld” which also means to kindle.

Elderberries grow from four to twenty feet in height with pithy stems and fruit that grow in clusters at the end of the stem. The leaves are compound, much like a fern, with a stalk that has leaves attached on either side. The seeds have a hard outer coat and lay dormant for two to five years before germination. They can be viably stored for up to sixteen years. Of the several known species, only the red elderberry plant is toxic and that includes the stems, roots, foliage, and the berries, which can cause nausea when eaten. The berries range in sizes as small as BBs to as large as split peas; the black elderberry is glossy in color while the blue elderberry has a powdery tint. The plant produces white to cream colored blossoms.

Elderberries are a rich source of nutrients, containing vitamins A, thiamine (B1), riboflavin (B2), niacin (B3), pantothenic acid (B5), pyridoxine B6, folate (B9), and C. Also found in elderberries are the following minerals: calcium, iron, magnesium, phosphorus, potassium, and zinc. They also have dietary fiber, fat, and proteins.

Elderberries have several healing qualities. The tincture is used in treating influenza and reducing the duration of the flu symptoms by several days. It also strengthens the immune system. Elderberries reduce the effects of allergies, protect against bacteria and infection, lower blood sugar, assist in weight loss diets, balance the digestive system, and slow down the spread of cancer.

Elderberries are a food source for wildlife. Bears feast on them; birds like finches, western tanager, cedar waxwings, grouse, and pheasant also feed on the berries. Deer, moose, and elk eat the stems and foliage. These animals contribute to the wellbeing of the plant by dispersing the seeds.

Elderberries are a Superfood!

Elderberries are a member of the honeysuckle family and can be found throughout the temperate zones of the world. The plant has been used since the stone age and as a medicinal herb for centuries. They have also several uses as a fire starter and to waterproof baskets. They are an ingredient in many recipes. This versatile plant has earned the right to be considered a superfood.