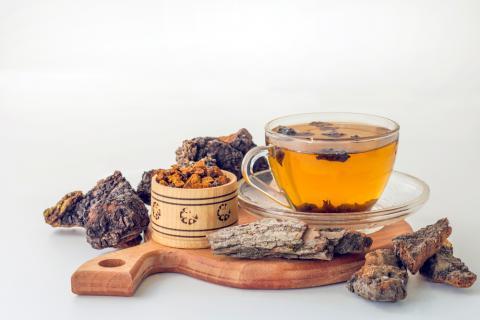 For the uninitiated, the name chaga immediately pokes at one’s curiosity—as does its nickname, “black gold.” The chaga mushroom (Inonotus obliquus) resembles a chunk of rough coal blooming from the side of a birch, stark in contrast to the tree’s white bark. Whether the name is just a bit of clever branding or finds its roots in its ancient medicinal context, it is, undoubtedly, correct.

The indigenous peoples of Siberia have been well informed of the healing properties of chaga for thousands of years, and the name chaga comes from the old Russian word for mushroom. However, Western medicine has only recently begun to recognize its potential.

The Value of Black Gold

While chaga’s craggy exterior is a bit uninviting, the softer, orange interior begins to illustrate this mushroom’s superfood status. Superfood, that is, in a figurative context. I certainly wouldn’t recommend eating chaga; you wouldn’t reap the benefits hidden in these nuggets if you decided to chow down on a handful. Traditionally, a tea is made from the mashed or ground mushroom, making it possible for you to enjoy the benefits of its high concentration of vitamins and nutrients.

These vitamins and nutrients include:

This long lineup only just scratches the surface of the mushroom’s healing capabilities. If you caught Melissa’s article, "Ask A Practitioner: Holistic Approaches To HIV", you might already have an idea of how incredible this stuff really is.

Chaga is a Holistic Solution

Before I get ahead of myself though, as a foundation of what’s to come, you should know that chaga is a powerful antioxidant in addition to providing protection from oxidative stress. There are actually a few different things contained in our “black gold” that do this. Though a lot of us have been on the antioxidant bandwagon for a while, this is important to understand about chaga because of the role that oxidative stress (that’s what antioxidants prevent) plays in neurodegenerative diseases such as Alzheimer’s and Parkinson’s.

The heavy hitter that we’ve been dancing around is something called a triterpenoid. It is found in olives (part of why olive oil is thought to be so great), apples, and a slew of other organisms. In chaga, these neat little chemicals are found in incredibly high concentrations and do some amazing things. Right off, they help reduce inflammation. That’s pretty great in and of itself, but that means that this gnarled fungus could help combat certain autoimmune disorders such as rheumatoid arthritis, eczema, and potentially many more. The research isn’t quite there yet, but the implications are enormous.

One area where the research is coming along quite nicely is in the study of mushrooms’ effects on cancer. To quote a 2011 study, these mysterious triterpenoids are also “promising candidates” in the fight against breast cancer. This chemical in chaga has actually been shown to be toxic specifically to cancer cells while getting along quite nicely with the healthy bits around the cancer. While I am not saying that drinking enough of this delicious mushroom tea will suddenly make cancer evaporate, it has shown a lot of promise in helping out in certain contexts.

This part is actually where I went from astonished to downright incredulous. Chaga actually does something that is…well, almost mysterious. Chaga doesn’t just kick our immune system into high gear, it actually helps your body maintain its “not-too-hot, not-too-cold” Goldilocks zone of just the right amount of immune activity.

This is where we find the edge of science. We are still trying to understand how exactly it does this. In 2011, researchers identified five different chemical processes that the mushroom helps or changes. Not only is this a serious candidate to aid the fight against cancer, the black gold has such an encompassing effect on your body—it also fights neurological diseases, prevents inflammatory diseases, and helps regulate your immune system if it’s getting too feisty. Finally, the seasonally appropriate cherry on top is that the chaga mushroom actually helps along the process that directly fights the spread of viruses in the body, meaning it even helps prevent the flu and common cold.

Where To Be Cautious

It is important to add that because this is such a powerful and incredible remedy, it is always a good idea to consult a doctor before starting to supplement with chaga. The Sloan Kettering Cancer Center advises those taking blood-thinning medications or medications for diabetes should avoid chaga. This is simply because some research suggests that chaga could lower your blood sugar and blood pressure, and as such, could interact with medications in unexpected ways. One way or the other, seeking additional medical advice is never a bad idea.

Where To Get Chaga

Foraging for your own chaga is usually going to be the best option if you live in a place where it commonly grows. You never have to question what you have in your hands, and you can be personally responsible for the quality of what you gather. Chaga grows from white and yellow birch trees in northern latitudes across the world. Though a lot of the chaga on the market comes from Russia, you can also find it in the Northern United States, Southern Canada, eastern and northern Europe, northern Japan, and Korea.  Make sure to use good harvest practices when you find some.

Once you get your hands on the black gold, you can either make it into a tea, a tincture, or both. Making tea then using the remaining mashed mushrooms to make a tincture is usually regarded as the most effective way to extract all the healthy goodness you can, as some of the beneficial parts of the mushroom are not water soluble.

While foraging chaga is likely the best option, many of us don’t live in any of the places it grows naturally. As such, there is no shortage of places you can purchase it online. When buying it you can get ahold of a wide range of supplements and powders in addition to the mushroom itself. This being said, as with any industry, some suppliers are more interested in the quantity of what they’re selling than the quality. Some suppliers have been criticized for using processing methods that destroy the nutrient value and medicinal properties of the end product.

Unfortunately, as more and more people decide to add this to their diet, the industry making that possible is coming up on hard lines of unsustainability. Because of chaga’s relationship with its host birch tree, most of the beneficial components of the mushroom never develop if it is artificially grown. It takes 3 or 4 years for a harvestable piece of chaga to grow in the wild, and as demand increases, the toll on the birch forests in which the mushroom is found is quickly growing.

This of course doesn’t mean that you shouldn’t consider adding it to your diet. There are many foragers and producers who do care for the rich and complex environment that is necessary for the growth of chaga. Just like with anything else, it’s simply a matter of being a conscious and responsible consumer. If you decide to learn firsthand what the black gold can do for you, take your time, do your research, and try to support the systems that will ensure that generations to come will be able to benefit from this rich holistic remedy.