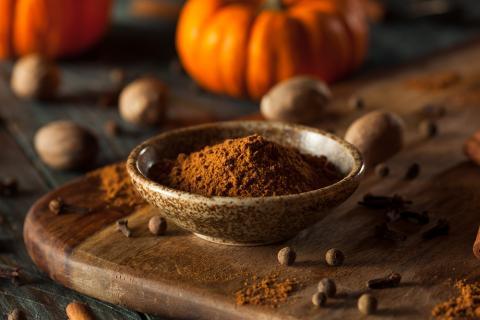 It's that time of year. That’s right, I’m talking about the avalanche of everything pumpkin spice.  Lattes, baked goods, protein shakes, hand soaps, room sprays and, yup, even toilet paper. Love it or hate it, pumpkin spice is here for the next couple months.

So, what exactly is pumpkin spice?  Typically, it’s a blend of cinnamon, nutmeg, ginger, cloves, and allspice. Aside from the above products, the spices are all medicinal powerhouses. For instance, all 5 are strongly antioxidant and would be a good part of a larger regimen at reducing the free radical activity contributing to all of the major chronic diseases.

Here is a little bit more on how each of these delicious spices shines in its own way.

A hot and blood-moving spice, cinnamon is one of the most characteristic components of pumpkin spice lattes, cookies, scones, air fresheners, etc. Ceylon cinnamon is the gold standard, though the less expensive Cassia cinnamon is what you’ll most often encounter at the coffee shop.

Cinnamon is considered a heart exhilarant in traditional Unani medicine. Exhilarants are uplifting and heart-strengthening herbs. By promoting blood circulation, cinnamon is a great cold weather spice for keeping your hands and feet warm.  It’s one of my favorite herbs for folks with blood sugar dysregulation. It improves the sensitivity of cells to insulin, which is necessary for cells to take up and burn blood sugar.  Cinnamon may even be good support if you’ve bopped your head while out and about this winter.

It’s near-universal use in pumpkin pie make nutmeg a quintessential component of the annual barrage of pumpkin spice products.  Though it’s used to add some zip to pie and eggnog recipes, Nutmeg is actually a strong sedative in medicinal doses. (Trust me, these doses don’t taste pleasant.).  It’s traditionally used in warm milk about 4 hours before bed. Add just a couple/few pinches of freshly ground nutmeg powder.  Be sure not to try this just before bed…it takes a few hours for the sedative effects to kick in, but they last for 8 hours once they do.

Nutmeg, like the other spices here, improves digestive function, reducing gas and bloating and supporting healthy liver function (yup, liver is part of the digestive system).  It’s even useful for the very top of the digestive tract: the mouth.  Here, it can be used as a mouth rinse to kill unwanted bacteria and stimulate healthy blood flow to the gums.

Note that nutmeg is neurotoxic in large amounts (usually being defined as more than 5 grams of the powder), though spice amounts and low medicinal amounts are fine.

This tasty spice is a slow-acting but effective remedy for joint and muscle pain. It can be used similarly for this as its cousin turmeric.  Ginger can actually be grown in a pot in your home…it’s a beautiful plant.

It makes a lovely tea for cold and flu, helping you to sweat, which is an important immune response against invading microbes.  Add a pinch of cinnamon and some grated lemon peel for even more antiviral and immune boosting punch.

Though all of the spices here provide antioxidant phytochemicals, those in clove are the strongest. This activity contributes to the ability of cloves to protect the liver from oxidative damage by toxic chemicals.

A little clove goes a long way in spice blends.  Its characteristic aroma and flavor are due largely to eugenol, an essential oil component also found in cinnamon, nutmeg, allspice, basil, and bay leaf. Eugenol is strongly active against viruses, bacteria, and fungal and parasitic infections.  Clove blends well with cinnamon and nutmeg for periodontal care. And, while clove essential oil has been popularly used as a pain reliever on the gums (including in teething babies), I don’t recommend this, as the oil may actually chemically burn the gums. So, once the numbing wears off, the pain may be worse. A better way to go would be to make an infused oil of cloves which will be a more dilute, safer alternative for topical use.

When I was a kid and saw this in the spice cabinet, I thought it was a blend of a bunch of different spices due to its name. The name allspice does indeed come from the fact that folks thought it tasted like a combination of cloves, cinnamon, and nutmeg.  But, nope, it’s a single spice that plays well with the other spices here because of some shared chemistry.   Allspice is the unripe berries of the plant Pimenta dioica, which is native to Central America and the Caribbean.

Like all of the pumpkin spice spices, allspice is a great digestive aid. It’s also used for diarrhea, heavy menses, nerve pain, bruises, and fatigue.  Think about that the next time you have a pumpkin spice latte.

To be clear, having your pumpkin spice sugary beverage or pastry isn’t the healthiest way to enjoy these spices.  But this is a great blend to use in whole grain, low sugar baked goods; on baked fruits such as apples, pears, and plums; and, yes, in pumpkin pie.